By Amoy Ghoshal
The nation's assistant boss stated his belief that the former Napoli hero and current Barcelona superstar are a step above the legendary Brazilian on the pitch
The much awaited international friendly between Argentina and Venezuela, to be held in Kolkata, is only two weeks awa, taking place on September 2, and Argentina assistant coach Julian Camino came to Kolkata on Thursday to check the security arrangements, the technical aspects of the venue and select an alternative training ground.

Camino is being accompanied by Alberto Oscar Pernas, a technical committee member of Argentina Football Association (AFA) and Rodrigo Martin Bauso and the trio visited the Mohun Bagan ground on Thursday to check whether it is fit for training.

Earlier this Friday, they carried out an official inspection of the venue of the match – the Yuba Bharati Krirangan in Salt Lake, Kolkata. They also visited the SAI complex and the five-star hotel in which the Argentina squad will be putting up during their stay in the City of Joy.

Camino and co. addressed the media on Friday evening but didn’t reveal much about their feedback on the inspection.

“We will form a report of our inspection and send it to our technical committee,” said Camino during the press conference.

Camino, who is interestingly a former East Bengal player, told the media that the Argentina team and Lionel Messi are very much looking forward to their visit to India and are expecting a big crowd at the match.

The former right-back also expressed his happiness on returning to Kolkata after more than two decades. He had played for the red and gold brigade back in 1988.

“Lionel Messi and Argentina are aware of their huge fan following here in India and Kolkata. They know they will be very well welcomed here. The whole team is looking forward to play in front of a large crowd.

“I have happy memories of playing here in Kolkata so it feels nice to be back here after such a long time.”

Argentina announced their 26-man squad for the friendlies against Venezuela and Nigeria (September 6) with Lionel Messi being named as the captain. Carlos Tevez is one notable absentee but when asked the reason for the Manchester City player’s exclusion, Camino told the media that he wasn’t in a position to comment: “We have named a strong team but I can’t answer regarding Tevez’s absence, only the technical director of AFA] can do that.”

The game against Venezuela will be the Argentina national team’s first match under new coach Alejandro Sabella and Camino stated that the two-time world champions will be taking the game very seriously.

“Any international match is important so the same applies for this game. We would look to give a good performance and get a good result,” he explained.

With Lionel Messi being the star attraction of this much awaited friendly, there were plenty of questions from the addressed media about the Barcelona star.

Camino refused to comment on Messi and Argentina's failure in Copa America 2011 but he did give an answer when he was asked to compare Messi and his former team-mate, the great Diego Maradona. 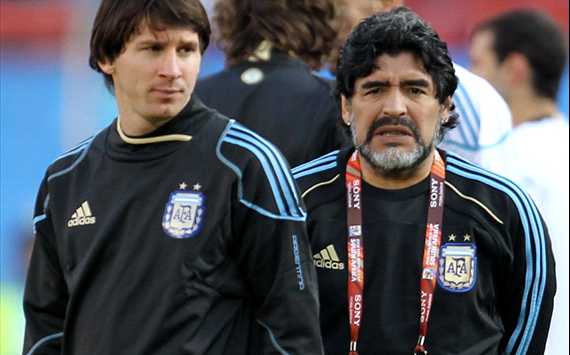 “Both [Maradona and Messi] are great players and it is difficult to answer this question as an Argentinean. But for me they are both better than Pele,” said the 50-year-old.

Camino and the other representatives are next expected to go to Dhaka in Bangladesh to inspect the arrangements there for Argentina’s friendly against Nigeria on September 6.


Download the Goal.com Mobile app, and the world of football will be at your fingertips and in your pocket!
Close