Considered by many as the greatest player of all time, here are 70 things you may not know about the Brazil icon
1. Pele scored a total of 1,283 first-class goals, including 77 for Brazil.

3. Pele was named after American inventor Thomas Edison, his real name being Edson Arantes do Nascimiento.

4. Pele was signed by Santos when he was 15. He scored four goals on his league debut in a match against FC Corinthians on September 7, 1956.

5. Waldemar de Brito, another great Brazilian forward, is credited with discovering Pele, taking him to Santos, and telling them then that he was going to be "the greatest football player in the world." 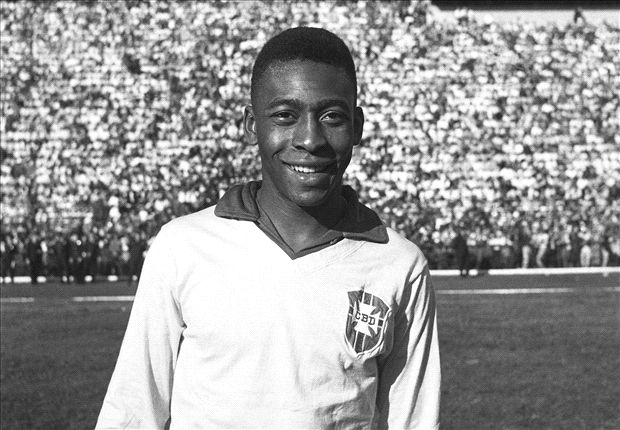 6. At 17, Pele became the youngest ever winner of a World Cup. He also scored twice in the final against home side Sweden.

8. He was voted athlete of the century by the International Olympic Committee (IOC) in 1999.

9. In 1997, Pele was given an honorary British Knighthood.

10. On November 19, 1969, Pele scored his 1000th career goal. Hundreds raced onto the pitch to mob the Brazilian star and it took over 30 minutes for the game to resume.

12. Pele is fifth on the all-time World Cup goalscorers list with 12 - and the second highest-placed Brazilian behind Ronaldo.

13.  When Pele retired, J.B. Pinheiro, the Brazilian ambassador to the United Nations, said: "Pele played football for 22 years, and in that time he did more to promote world friendship and fraternity than any other ambassador anywhere."

14. In 1967, a 48-hour ceasefire was declared in Nigeria so that Federal and Rebel troops could watch Pele play on a visit to the war-torn nation.

15. Pele said in 2006: "For 20 years they have asked me the same question, who is the greatest? Pele or Maradona? I reply that all you have to do is look at the facts - how many goals did he score with his right foot or with his head?"

16. When Pele played for the New York ,so many of his opponents wanted to swap shirts with him that the club had to give each of their opponents a shirt after every match. "Pele was the main attraction," says Gordon Bradley, one of the club's coaches at the time. "Sometimes we had to take 25 or 30 shirts with us to a match - otherwise, we'd never have got out of the stadium alive."

17. Pele made a cameo appearance in the film Mike Bassett: England manager, in which he was interiewed by the broadcaster Martin Bashir. He laughs off England's chances of winning the World Cup.

18. Pele on the importance of football stars: "When football stars disappear, so do the teams, and that is a very curious phenomenon. It is like in the theatre, in a play, where there is a great star. If the star is not well, the whole cast suffers."

20. Noted English football writer Geoffrey Green once declared: “Di Stefano was manufactured on earth, Pele was made in heaven.” 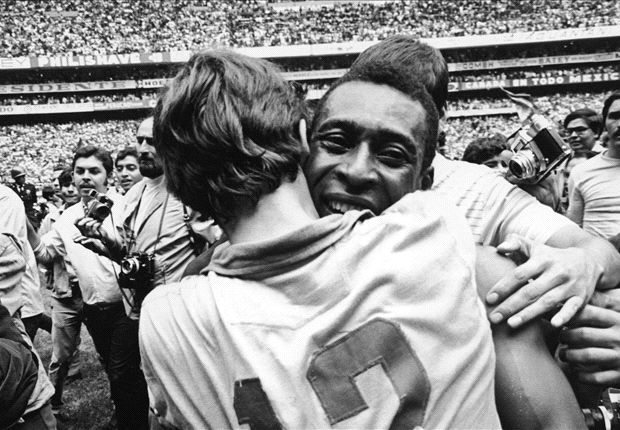 21.  On August 1, 2010, Pelé was introduced as the Honorary President of a revived New York Cosmos.

23. In March 2003, Brazilian model Gisele Bundchen was offered special intensive training in flag-waving in advance of the 32nd Brazilian Grand Prix. Why? Organisers wanted her to do a better job than Pele, the previous year's flag waver, who got "distracted" and failed to notice Michael Schumacher crossing the finish line!

25. Pele and Maradona are hardly friends. In 2010, Pele said of the Argentinian: “He is not a good example for the youth. He had the God-given gift of being able to play football, and that is why he is lucky." Maradona's response: “Who cares what Pele says? He belongs in a museum.”

28. Pele's father once scored five headed goals in one game, a feat that Pele was never able to replicate. The most headers Pele ever scored in a game was four.

29. Former Manchester City and England star Rodney Marsh once said of Pele: “Comparing Gascoigne to Pele is like comparing Rolf Harris to Rembrandt.”

32. Since April 1994 Pelé has been married to psychologist and gospel singer Assíria Lemos Seixas.

34. Pele on success: "Success is no accident. It is hard work, perseverance, learning, studying, sacrifice and most of all, love of what you are doing or learning to do."

35. Pele is mentioned in the song "Ghetto Superstar" by the rapper Pras.

36. In 2000, Pelé was named second in the BBC's "Sportsman of the Century" award. Boxing legend Muhammad Ali came first. 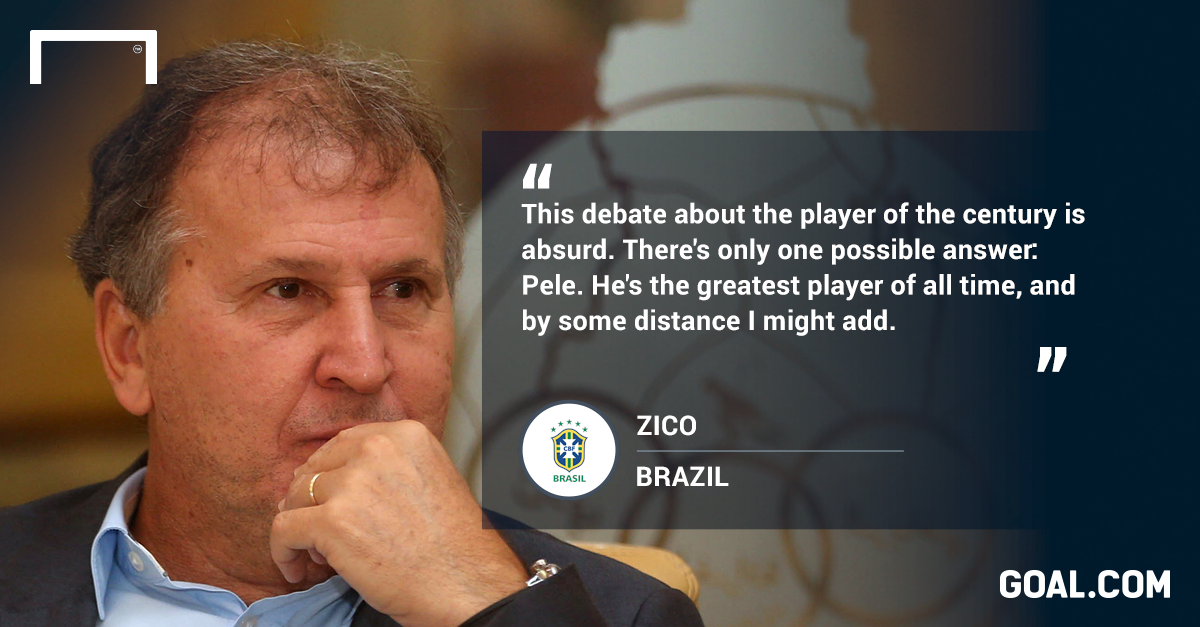 37. Tarcisio Burgnich, the Italian defender who marked Pelé in the 1970 World Cup final, said afterwards: "I told myself before the game, he's made of skin and bones just like everyone else — but I was wrong."

38. In Brazil he is often called “Pérola Negra”, which means Black Pearl.

39. The Brazilian government declared Pelé an official national treasure in 1961 to prevent him from being transferred out of the country.

41. To persuade Pele to sign for the New York Cosmos in 1975, Clive Toye, the team's general manager said: "Don't go to Italy, don't go to Spain, all you can do is win a championship. Come to the U.S. and you can win a country."

42.  Pele’s first football team was formed with a bunch of friends from his neighbourhood, and they called themselves ‘the shoeless ones’.

43. In Brazil, Coca-Cola sponsors a Pele museum on wheels that travels throughout the country.

44. Cristiano Ronaldo once said: "Pele is the greatest player in football history, and there will only be one Pele."

45. Pele is the only player to have been a part of three World Cup winning teams.

47. Pele scored 92 hat-tricks, and scored four goals on 31 occasions, five on six occasions, and once scored eight in one match.

48. As a boy, Pele used to play with a sock stuffed with paper as he could not afford to buy a football.

50. Pele has worked as a UNICEF Goodwill ambassador and as a United Nations ambassador, working to protect the environment and fight corruption in Brazil. 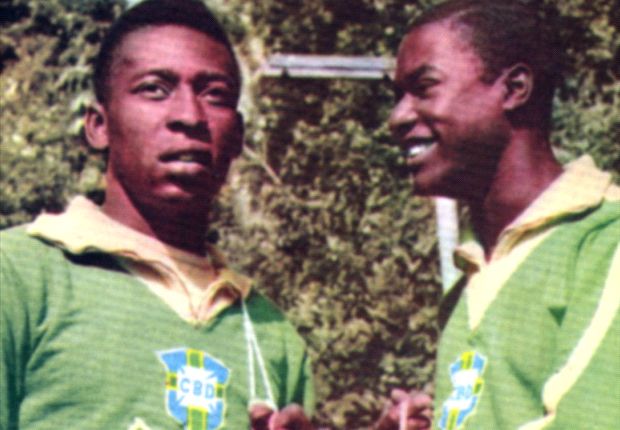 52. On October 1, 1977, Pele played his last game as a footballer as Santos played New York Cosmos at the Giants Stadium. He played the first half of the game for the American club, and the second half for Santos.

53. Brazil never lost a game when Pele and the legendary Garrincha played together.

54. He holds the record for the most number of goals scored for the national team, which is a record that has stood for almost 40 years.

58. Dutch artist Dick Brynestein made a drawing of him and called him Pietje Pele. 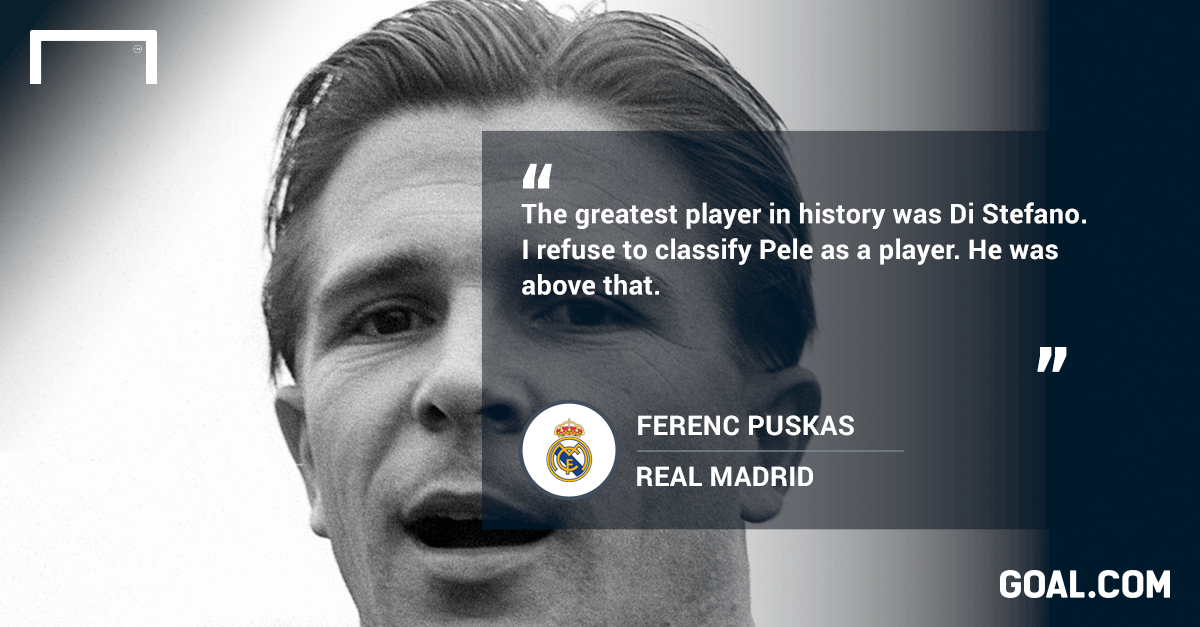 61. Pele made his first appearance for New York Cosmos on June 5, 1975, against Dallas Tornadoes. He managed to score on his debut, with the game ending in a 2-2 draw.

62. Pele starred in Escape to Victory, a World War II drama about a team of prisoners of war who play their Nazi captors in a football match. Unsurprisingly, he played the team's star attacker, Corporal Luis Fernandez, who hailed from Trinidad and Tobago.

63. In 2005, Pele fronted an advertising campaign for the drug Viagra, and was widely credited for breaking the taboo about speaking or receiving treatment for erectile dysfunction.

64. American forward Edson Buddle is named after the great Brazilian. "I thought naming him Pele would be too much pressure," his dad revealed. "Edson not many people would know."

65. As he prepared to kick off in a game during Mexico '70, Pele gestured to the referee that he needed to tie his laces. The cameras panned in to reveal the forward's Puma boots — the company subsequently experienced a huge sales boost.

66. Pele scored three or more goals a staggering 129 times during his career.

67. Pele has never liked his nickname, admitting it sounds like "baby-talk".

68. Pele's 1000th goal was a penalty. Romario, chasing his own 1000th strike in 2007, eventually reached the milestone in the same manner — although his tally is also disputed in some quarters.

69. Germany legend Franz Beckenbauer said of Pele: "He is the most complete player I ever saw."
70. Filming on Citizen Kane, widely viewed as one of the defining films in Western cinema, finished on the day of Pele's birth. In 2001, on Pele's birthday the world got its first glimpse at one of the defining gadgets of the modern era — the iPod.
Close