EXCLUSIVE: The former Bayern and Shakhtar midfielder has offered his take ahead of Wednesday's Champions League clash and believes the Bavarians can win it all under the Spaniard
Former Bayern Munich midfielder Anatoliy Tymoshchuk has defended Pep Guardiola and believes his former side have the ability to match the achievements of Jupp Heynckes’ treble winners.

Tymoshchuk, now at Zenit St Petersburg, spent four years at the Allianz Arena, a spell which culminated in Bayern winning the Champions League, Bundesliga and DFB Pokal in 2012-13.

After that success, Guardiola replaced Heynckes as coach. But despite claiming the domestic double last season, he has failed to hit the heights of his predecessor in Europe.

This has led to criticism of the ex-Barcelona boss, but Tymoshchuk believes it is unfair, insisting the Spaniard just needed time to make his mark on the team.

"Jupp Heynckes’ team made some extraordinary achievements, particularly in winning the treble," the midfielder told Goal.

"But any coach needs time to create his team and to develop the team in his vision of football. Heynckes needed it, now Guardiola needs it as well.

"Bayern are a very strong team and I am sure they are capable of achieving what Jupp’s team did.

"I have no doubts about this because Bayern have everything: history, tradition, ambition, motivation and top-class players, coaches, fans and management. That is why Bayern are a top club." 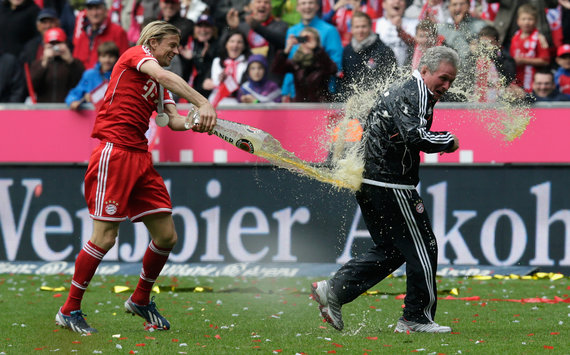 Celebration time | Tymoshchuk and Heynckes won treble together in 2012-13

On Wednesday, Shakhtar will travel to Munich to play Bayern in the second leg of their Champions League last 16 tie with the scores level at 0-0.

"Bayern are playing at home where it is difficult for any opponent and they are favourites to go through," the 35-year-old stated.

"Shakhtar will not change their style of football. They will try to use the wings, playing fast and on the counter. They will go for an away goal and if they score they can create problems for Bayern.

"We can expect more from both teams in the second leg as both sides didn’t play their best football in the first leg."

Tymoshchuk also offered his take on the debate in Germany over whether Bastian Schweinsteiger and Xabi Alonso are compatible in the same team.

"Bastian is a very talented and versatile player who can play in different positions. If he is given the right job, he can be very useful for the team. He has proven this with Bayern and the national team," the 135-cap international stressed.

The midfield pair will not play together on Wednesday as Xabi Alonso is suspended after he was sent off in Ukraine a fortnight ago.
Close