The promising Spaniard could be sold as Carlo Ancelotti's side are looking to make room for the Colombia international, with Liverpool keen to lure him to England
EXCLUSIVE
By Jorge Martin

Real Madrid are ready to cash in on Isco this summer as they are looking to generate funds for Monaco star James Rodriguez, with Liverpool sitting in pole position to sign the former Malaga star.

The Liga giants are close to an agreement with the Ligue 1 side for the Colombia international and Isco could be sacrificed as Carlo Ancelotti aims to trim his bulging squad ahead of the 2014-15 campaign.

Monaco had informed Madrid that it would take a mega €90 million bid to land James - a figure that president Florentino Perez would be willing to pay as he looks to land his marquee Galactico signing.

With Toni Kroos having already arrived from Bayern Munich, Madrid are keen to offload some fringe players first, though.

Sami Khedira and Angel Di Maria have both been heavily linked with a move away from the Santiago Bernabeu side, but Madrid are keen to hold on to the Germany international - irrespective of interest from Arsenal and Chelsea - while they are only willing to let go of Di Maria if an offer in the region of €60 million comes in. 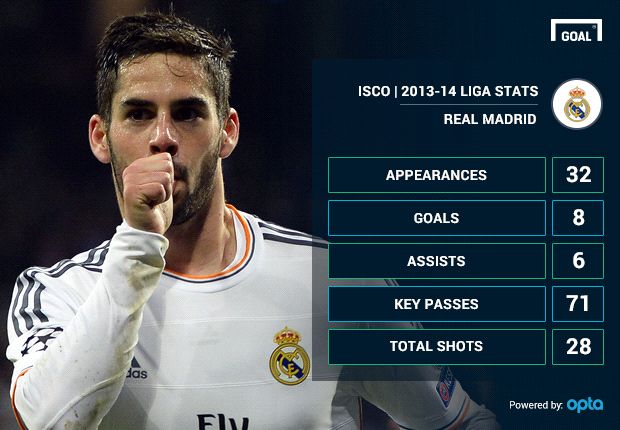 Isco is therefore the most likely of Madrid's talented set of midfielders to be moved on and Liverpool and Manchester City, who have a long-standing interest in the Spaniard, are closely monitoring the situation.

Manuel Pellegrini's side would be more interested in a loan deal, however, leaving Liverpool in pole position for the gifted midfielder, who only joined Madrid from Malaga last year.

The former Malaga star, who can operate in any position behind the central striker, is not keen on a bit-part role behind the likes of Cristiano Ronaldo, Gareth Bale and James and could be attracted by the prospect of becoming Liverpool's main man following the departure of Suarez.