By Jon Arnold
While both coaches guided their sides to group wins in the Copa America Centenario, they used very different lineup strategies to get there.

HOUSTON — You could almost hear the resignation in Juan Carlos Osorio's voice after the match.

His Mexico side had just clinched the top spot in Group C of the Copa America Centenario thanks to a 1-1 draw with Venezuela. Osorio had made nine changes from the side that topped Jamaica, 2-0, in the second group contest. The first question from the media after the tie was something he's answered again and again: Will you keep rotating players?

"Again, we always analyze the next opponent and according to this and our players' level we'll make the decision," the manager said. This is a strategy that is not new from Osorio but seems to have confused many in the press corps who expect El Tri to find a best XI and stick with it. They might not have been paying attention to Osorio's previous spells with clubs in MLS, Colombia and Brazil (or even a stint in Mexico), where he earned nicknames like "El Recreacionista" (The Recreationist) or simply "The Tinkerman" for his perpetual modifications.

Osorio later allowed that there's a base of "five, six or seven players" who are "the most influential players, but not starters." But the changes will continue.

"We think of the rotation as a principle, a principle in that it gives everyone a chance because we think all the players are important," Osorio said.

Like Mexico, the United States qualified for the Copa America Centenario quarterfinals as the first-place team in its group. But in contrast to Osorio's tinkering, United States coach Jurgen Klinsmann relied on the consistency starting the same XI provided. 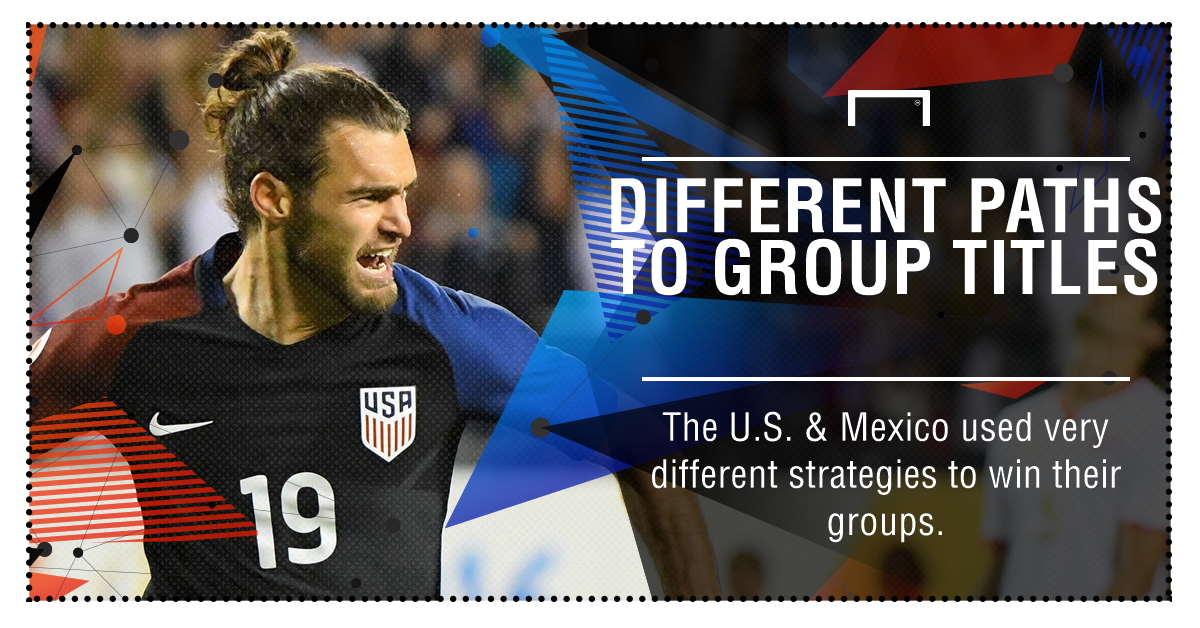 It's the first time the U.S. has used the same starting XI for three consecutive matches since the 1930 World Cup. That's been a breath of fresh air for American fans who say they're tired of Klinsmann making switches along the back line, where communication can be key, or up top, where players are looking for a rhythm.

He settled on a starting lineup and then stuck with that lineup in all three group contests. After losing to Colombia, the U.S. needed a dash of luck to win the group, but went out as the winner thanks to Costa Rica's last-day victory against Colombia. That gives the U.S. a quarterfinal against Ecuador, a match that looks winnable for the Americans.

Changes will be required in that match, with DeAndre Yedlin's red-card suspension killing hope of breaking any records set more than 80 years ago. But Kinsmann was ready for that to come.

The conventional wisdom aligns more with Klinsmann's strategy so far than Osorio's, but the Colombian has achieved plenty of success during his first go-around with a national team. Klinsmann's team isn't quite as deep as the one Osorio has at his disposal, with Mexico able to field nearly an entire XI of in-form European-based players if it so chooses.

The Americans don't quite have that luxury. That likely made Klinsmann's decision to seek consistency over variety in picking a lineup easier to make. For Osorio, scouting the opposition and figuring out how El Tri can best counter that is of utmost importance.

It's not about which method is better. So far, the varying approaches have worked for CONCACAF's giants, the only two teams from the region given an automatic pass into the Copa America Centenario and the only two playing past the group phase. It's about what's working for those individual teams. Expect both coaches to continue to stick with what they believe works best and hope it leads their teams to the lofty goals each federation set prior to the tournament.