By Daniel Edwards
Javier Garcia takes his time to secure a Xeneixe triumph over Racing, while an Ogre and a Magician seal an All Boys fairytale and River's Ferrari scores an improbable winner...
Garcia Takes His Time To Inspire Xeneixe Triumph

After being the scapegoat last week against Godoy Cruz, Javier Garcia found himself the hero on Saturday as Boca Juniors defeated Racing Club 1-0 away in Avellaneda. The goalkeeper made several excellent saves in the first half to erase bad memories of the opening day, including a fantastic one handed stop from Pablo Luguercio's header as Racing dominated the opening exchanges.

The 'keeper really came to the fore in the second period though, with a decisive if controversial contribution to the game's only goal. With the half just minutes old Garcia claimed a corner and took a full 10 seconds to release the ball, creating the week's obligatory polemic in Argentina hereafter christened '10 secondgate'. When he did finally launch the ball upfield however it flew over the Racing defence and straight to Pablo Mouche, and blissfully alone the striker fired through Jorge de Olivera's legs to send the visiting fans wild.

A La Academia shorn of the creative talents of Gio Moreno and Pato Toranzo could not bounce back and find the equaliser, and Boca recorded their first victory of the season with the promise of far better performances to come.

All Boys In Dreamland Thanks To The Ogre

Plucky All Boys continued to make the lives of the Primera big boys a misery, this time adding the scalp of Velez Sarsfield to the long list of clubs who have come a cropper against the newcomers. The Floresta outfit had Sebastian Grazzini and Cristian Fabbiani to thank for a 2-1 victory against their neighbours and rivals, who boast just one point from the first two fixtures.

'El Mago' Grazzini smashed home an opener in the first half from the edge of the area, before David Ramirez levelled in the second with a powerful header. Just two minutes later though 'El Ogro' Fabbiani used his not inconsiderable bulk and no little skill to hold up the ball in the area, before cutting back to Grazzini to add his second and secure a famous victory.

Juan Jose Lopez's River Plate side won a crucial relegation clash on Sunday, defeating Huracan 2-0 to open up a seven-point cushion over the Globo and the relegation play-off places. Teenage sensation Erik Lamela scored the opener in another impressive display, while Mariano Pavone was another star despite failing to find the scoresheet. 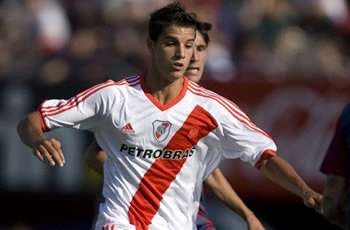 Lamela struck in the opening minutes of the second half to open the scoring, playing a neat one-two with 'El Tanque' Pavone to charge through and delicately dink the ball past Gaston Monzon. The ex-Betis striker was once more the architect of River's second, crossing perfectly onto the head of Paulo Ferrari to polish off a Millo counter attack.

The win leaves River fifth after two games with four points, while 'El Negro' Lopez can bask in the fact that since he took over, only Estudiantes can boast a better record than his side in the league.

Best Of The Rest

The second round finished with a surprise leader, as Olimpo downed Gimnasia away from home to stay top of the pile and, more importantly, send the Lobo into the automatic relegation places in their stead. A Gimnasia self-destruction in the second half led to a 3-1 defeat; goalkeeper Gaston Sessa's dismissal for handling outside the area and the subsequent conversion of the free kick by Martin Rolle the nail in the coffin for Angel Cappa's side.

Gimnasia are accompanied in the drop zone by Quilmes, who fell 1-0 at home to Estudiantes thanks to yet another strike from newly prolific Gabi Mercado. Elsewhere, San Lorenzo performed superbly to down Copa Libertadores heroes Godoy Cruz 2-0 in Mendoza; Independiente stretched their winless Primera streak to 11 after drawing 0-0 with Argentinos Juniors; and another goal by Esteban 'Bichi' Fuertes secured a point for Colon against Banfield.

See the Full Results and Standings After Round Two Here

Hero Of The Week 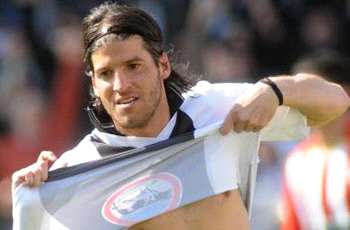 The ex-Racing playmaker blasted home two for his club on Saturday, as the Albo recorded a victory against Velez, which is certain to be remembered a good while on the Floresta terraces.

Zero Of The Week

When Cappa took over at the Lobo he pledged to take Gimnasia out of the relegation play-offs and after two games he has already followed through, albeit in the wrong direction. A 3-1 home defeat to lowly Olimpo leaves the club in the direct drop zone, and 'Angelito' will need to drag the team up sooner rather than later.

'Nigel de Jong' Of The Week

Hugo Barrientos may have been suspended after becoming public enemy number one last week, but All Boys players were in no mood to cut out the rough stuff. The highlight of a physical game against Velez was Emanuel Gigliotti pole-axing Maxi Moralez on the sidelines - and unlike Hugo, receiving a red for his troubles.

Quote of the Week:

"When my baby is born it is never going to believe that Dad once scored a header!"

Paulo Ferrari will have to keep the video to convince his cynical infant, after the 5'6" full back headed in for River against Huracan.