By Daniel Edwards
'El Loco' is Botafogo's hero against Santos, Washington hits twice to keep Flu at the top and Cruzeiro leapfrog Inter into the top four, in an action-packed midweek round in Brazil...
Santos 0-1 Botafogo

Uruguayan star Sebastian Abreu ensured victory for Botafogo away from home with a stunning last minute goal, which left the Peixe shell-shocked after a hard fought match. With the three points the Rio side overtake Santos to go into third place in Serie A, while the home side drop out of the top four three points behind closest rivals Cruzeiro.

Santos had numerous chances early on, with Keirrison in particular guilty of squandering some decent opportunities and Jefferson impressing in the Alvinegro goal. As the game progressed however forwards Neymar and Keirrison found themselves more and more isolated up front, as Bota looked to turn the screws on the Peixe midfield.

The game looked set to finish goalless, until substitute 'Loco' Abreu stepped forward with almost the last kick of the game. The World Cup hero, who since returning had struggled with form in Brazil, received a header in the area and with three touches took the ball down, dinked it over Santos number 1 Rafael and slammed it in the net. Botafogo will look to approach the top two this weekend at home to Sao Paulo, while Santos will aim for instant redemption away to managerless Ceara.

In another top of the table clash it was Cruzeiro who made off with all three points, narrowly overcoming a strong effort from the visitors to confirm their place in the top four. The game marked three straight victories for the Belo Horizonte side, who have also lost just once in the last 10 games.

Midfielder Everton hit the only goal of the game after 15 minutes to put Cruzeiro in the driving seat. Full-back Jonathan put in a dangerous cross, which was met perfectly by the late-arriving Everton and converted coolly: 1-0 Cruzeiro.

Missing Andres D'Alessandro due to international commitments and still without injured target man Alecsandro, Inter struggled to create real opportunities to restore the balance. Giuliano went close after a beautiful dribble that beat two men late in the second period, but his effort was turned away by Fabio. A committed defensive effort from the home team however nullified the Gaucho attacking aspiration, and Cruzeiro were left celebrating as they finally reached the top four.

Fluminense celebrated a goal-laden return to winning form after disposing of a sorry Ceara side, in a game which would hasten the exit of coach Mario Sergio after just six games. The Tricolor arrested a run of three games without a win, and with rivals Corinthians dropping points against Atletico PR, the Rio side find themselves three points clear at the top of the Brasileirao.

Striker Washington was the hero for Fluminense, as he notched his seventh and eighth goals of the season to kill the game off in the first half, after Mariano had given Flu the perfect start in the sixth minute. Pick of the goals for the veteran scorer was the first; the 35-year-old was threaded through on goal perfectly by playmaker Dario Conca, and lifted the ball over goalkeeper Michel Alves to put the Tricolor in a commanding position.

In the second half, Fluminense lowered the tempo somewhat, which allowed Ceara to reduce the deficit late on with Geraldo's 89th minute effort. There was never any question of a Ceara comeback however, and the home side gave another warning that, with more than half of the season complete, they are the team to beat in Serie A.

Full Results of Round 20:


Player of the Week 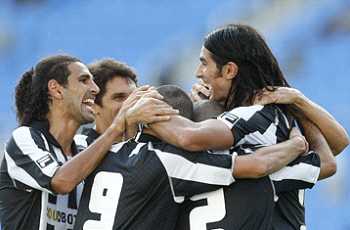 Sebastian Abreu: The Uruguayan made the perfect comeback from the reserves to goalscoring hero, making it harder and harder for coach Joel Santana to keep him out of the Botafogo side.