The spiralling costs of hosting the tournament next summer have sparked a social revolution in the country, leaving Fifa with a serious dilemma
COMMENT
By Greg Stobart in Rio de Janeiro

“Violence out of control” screams the front page of Brazilian newspaper O Dia. It's a theme mirrored across the media here in Rio, after more than 1,000,000 people protested against the government in 100 cities on Thursday.

As police used tear gas and rubber pellets to disperse some of the 300,000-plus people who marched in Rio, at least one death was reported, in Sao Paulo, as the mass demonstrations transitioned from peaceful to ugly.

Brazil’s president has cancelled an overseas trip to deal with the crisis and she may well be calling Fifa in the coming days to discuss calling off the the Confederations Cup, a warm-up tournament for the 2014 World Cup.

Fifa insisted on Friday morning that the possibility of cancelling the tournament has not been contemplated, but that could change in the coming days, with this weekend expected to see the largest rallies to date.

While world football’s governing body will do its utmost to resist such a scenario, the safety of supporters, tourists, players and staff must be the priority.
Just watch 30 seconds of a Brazilian news channel today and you will come to the conclusion that security cannot be guaranteed as the situation risks descending into chaos.

It is nearly at breaking point, with security resources stretched to the maximum by the demands of simultaneously policing the Confederations Cup and ‘controlling’ the protests - which, in Rio on Thursday, meant a violent crackdown.

While organisers are right to press ahead for now, this weekend is likely to determine the future of the Confeds, and indeed the World Cup itself.

The security threat to the eight competing teams has already been highlighted this week as six Spain players had their rooms burgled in team hotel as they played Uruguay in Recife, while the wife of Brazil goalkeeper Julio Cesar was robbed as gunpoint in Fortaleza.

The biggest wave of protests in Brazil for 20 years started over a rise in bus fares earlier this month but have taken off with planned demonstrations at Confederations Cup matches since the start of the tournament in Brasilia last Saturday. 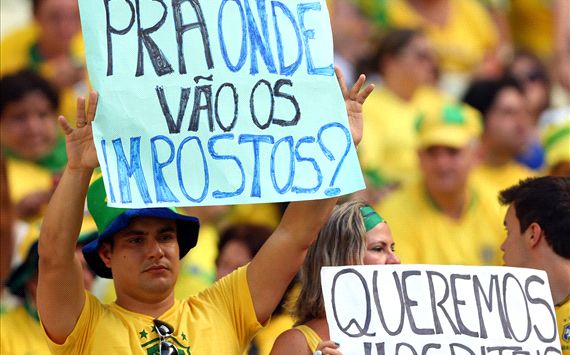 Where are the taxes? | Brazilian fans make their feelings clear inside the Maracana
While the demonstrations have been over a variety of issues, in the background has been the cost of the World Cup - estimated to cost the government around £10 billion - and a perceived skewing in priorities.

“First world stadiums, third world schools and hospitals,” read one banner in Rio last night. They blame Fifa and the government for the escalating cost of the construction of the 12 stadiums for next summer’s tournament, which have failed to attract the anticipated private investment.

“Fifa come here and show off about the new stadiums but what they are doing is slowing down the change of Brazil from ‘developing’ to ‘developed’,” one protester told Goal during the march outside the Candelaria in Rio. “This is a country of 190 million people but who benefits from the World Cup? Fifa and the people who are already rich. The priorities are wrong.”

This is the most football-mad country in the world. Wherever you go, people are kicking a ball, wearing replica shirts or huddled around a television watching a match in a cafe.

Yet we have got to the stage where they don’t care about the World Cup, the biggest sporting competition on the planet.

I have spoken to people who earn as little as £10 a day who don’t anticipate any benefits from the tournament. They are simply ruing its cost and the construction ‘white elephant’ stadiums in cities like Brasilia, which has no major football club.

With stadiums over budget and incomplete - a Corinthians executive described their stadium construction to me as “a complete f*****g disaster” - the cocktail of issues provides reason to doubt whether Brazil will even be hosting the World Cup this time next year.

Fifa president Sepp Blatter, who left the country earlier this weekend to attend the Under-20 World Cup in Turkey, has often spoken about the power of football in inspiring social change.

This is not how he meant it, but the Confederations Cup and the World Cup have united people in calling for a better Brazil and better use of their taxes.

Fifa have been put in their place for crowing about their shiny stadiums and ignoring the huge wealth gap in this country. Now they can only hope that we have seen the worst of the protests, or they could be facing the ultimate embarrassment of cancelling one of their prided tournaments.