By Clark Whitney
Giuseppe Rossi netted a late equaliser to deny Germany their first win against Italy in 16 years...
Germany were unable to avenge their 2006 World Cup semi-final loss after being held to a 1-1 draw in Dortmund. Despite going ahead early, die Mannschaft conceded a late equaliser that denied them what would have been their first victory against the Azzurri in 16 years.

The hosts took no time to find their rhythm, and opened the scoring on 16 minutes after a clever back heel from Mesut Oezil to Thomas Mueller, who set up Miroslav Klose for the finish. Italy improved and had a couple penalty claims denied before Giuseppe Rossi was played through in the 81st minute, and followed up his initially saved effort with a good finish.

Two minutes after his opener, Klose was again through on goal following a defence-splitting ball from Oezil, but Gianluigi Buffon stood his ground and made a superb save. The Germans looked quite comfortable over the opening half hour, but Italy fought back and had a good chance through Daniele de Rossi, who showed tremendous control as he volleyed Giorgio Chiellini's cross on goal. The Roma man had enough power on his shot, but Manuel Neuer was well positioned to punch the ball clear.

De Rossi's chance breathed new life into Italy, who were disappointed not to be awarded a penalty after a collision between Per Mertesacker and the impressive Antonio Cassano. Stefano Mauri wanted a spot kick as well after his cross was blocked by Dennis Aogo's hand, but play continued.

After the half-time break, the pace of the game slowed significantly as a slew of substitutes settled in. Italy were first to settle in, and substitute Marco Borriello sprung the offside trap before having his effort saved by Neuer. Following the resulting corner, fellow replacement Alberto Aquilani struck a good effort from 18 yards, but missed wide of the left post. 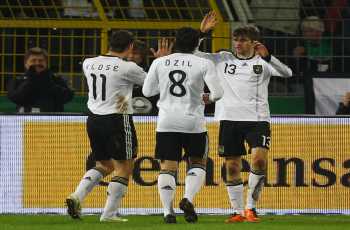 As more and more substitutions were made, the game became further disjointed, and both sides struggled for fluency going forward. The Germans temporarily regained their dominance of possession and looked like holding onto their lead, when substitute Giuseppe Rossi netted an equaliser that had long been in the making.

Having lost their lead, the Germans again went out on the attack, but ran out of time. Buffon made an excellent save from Sami Khedira, and substitute Kevin Grosskreutz wasn't quite able to get his foot around the ball as he looked to curl in a long-ranged blast.

Germany will be disappointed not to have held onto their lead tonight, especially after putting on a rather lacklustre second half performance. Italy, by contrast, will be pleased to have come back and will take confidence from tonight's match, having equalised from free play.