By Kris Voakes
The Manchester City defender's second half header gave Francois Zahoui a debut win on the Elephants' bench...
Cesare Prandelli's debut as Italy coach ended in disappointment thanks to Kolo Toure's 55th minute header, as Cote d'Ivoire recorded a deserved 1-0 victory in their international friendly at Upton Park.

The former Arsenal defender returned to London with style, heading home after great work on the right hand side by Guy Demel to hand caretaker coach Francois Zahoui a debut win.

It was a defeat which the Italians could have few gripes about, despite seeing plenty of the ball and creating a number of half chances. The headline inclusion of star pairing Antonio Cassano and Mario Balotelli gave them a new edge that wasn't evident at times during the World Cup, but they eventually succumbed to a strong, well-organised Ivorian side.

Despite the pace being very much akin to most friendly matches, there were threats in both boxes in the first half as each side had their reasons to take the game seriously after their respective disappointments at the World Cup in South Africa.

Ivory Coast's best chance came on 28 minutes when Siaka Tiene ran superbly at Marco Motta, committing the full-back and opening the Azzurri backline before Salomon Kalou sent Gervinho free with a one-on-one chance on Salvatore Sirigu, but the attacker slid his shot wide of the target.

There followed an increased sense of urgency in the game, with Cassano very nearly creating a goal for Amauri at the other end when crossing from the left after great play by Balotelli, who had earlier whipped a free-kick inches over the bar. 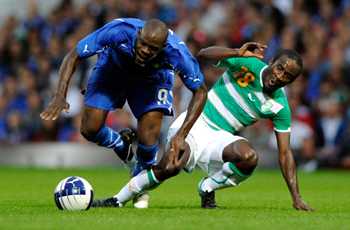 After Toure had headed home the game's only goal, Prandelli looked to shake things up somewhat with a string of changes, but though substitutes Fabio Quagliarella and Marco Borriello both had half-chances the game began to break up much more.

The result continues a miserable run in August friendlies for Italy, who have now lost five in nine years, and leaves them still searching a morale boosting win as they head for a European Championship double-header against Estonia and the Faroe Islands in three weeks time. For the Ivorians, though, this could be a result which throws Zahoui into the reckoning for the full-time job with the AFCON qualifiers due to start soon.