New Zealand played hosts to Serbia today in what should have been an easy stroll for the visitors ahead of this summer's fast approaching World Cup.

However, the Serbs failed to notch a single goal. Their only eventful contribution to the match came when ex-Valencia striker Nikola Zigic got himself booked for bad behaviour.

At the other end, New Zealand's German-born striker Shane Smeltz put his side ahead after only 22 minutes. The 28-year-old's strike would prove to be the difference between the sides in the long run, as his solitary goal stood up as the winner.

After a stellar qualifying campaign, Inter midfielder and Serbia captain Dejan Stankovic will be wondering how to rectify the squad's shortcomings before the World Cup commences in under two weeks' time.

Highlights of Serbia-New Zealand can be seen here.

Eto'o has said Inter will carry on winning without Mourinho... 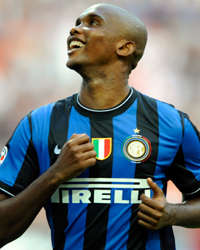 Samuel Eto'o has said Inter can win everything even without Jose Mourinho's special touch as he prepares for life without the treble winning coach who will join Real Madrid on Monday.

"No one can cancel what Inter did. As for Mourinho, he has all my respect for the work we did, but everyone has the right to take their their own decisions," Eto'o told La Gazzetta dello Sport.

"Inter are one of the best club's in the world and we can start a cycle here."

Eto'o has no regrets leaving Barcelona for Serie A. He says Inter's treble winning season which saw them crowned kings of Europe means that the best place to play football is in Italy.

"Last summer I heard the same things all the time. Kaka, Zlatan Ibrahimovic and Cristiano Ronaldo all went to Spain, thinking La Liga

was the best," he added.

"But I went to Inter. An Italian team won the Champions League, that means the best is in Serie A."

Questions have been raised as to whether Inter can continue the legacy post-Mourinho, and Eto'o says they can, only if they replace him with a top coach in Barcelona's Pep Guardiola.

"Pep is one of the best coaches in the world. [Massimo] Moratti would make a great choice if he brings him to Milan," he added.