By Robin Bairner
‘La Petit Velo’ marked his international debut with the winning goal over the Ticos in Lens...
France 2-1 Costa Rica - Lineup/Stats

France’s World Cup preparations started on a positive note with a bright 2-1 success over Costa Rica at the Stade Felix Bollaert as they waved goodbye to their home public with a win.

The Ticos made the perfect start to the game when Carlos Hernandez’s speculative effort deceived Steve Mandanda in the home net, though they were able to maintain their advantage for little more than ten minutes. A raid from Franck Ribery was the catalyst to the levelling goal, with Douglas Sequeira turning the ball unfortunately into his own net. After the interval, les Bleus controlled play to a greater extent, finding the winning goal with time running out via debut substitute Mathieu Valbuena.

In the early moments of the game Costa Rica did their best to take the sting from France, but after initial success les Bleus started to make real inroads. Though Ribery was the main protagonist in the early stages, and would be for the duration of the half, it was Sidney Govou on the opposite side of Raymond Domenech’s 4-3-3 system who had the better chances. The Olympique Lyonnais man drew a decent block from Keilor Navas before spooning an effort over the top moments later.

Totally against the run of play, the visitors moved into the ascendancy. Bryan Ruiz gathered the ball before laying it back to Hernandez, who was in a rather innocuous position. Trying his luck from 25 yards out, slightly to the right of centre, his rather tame bouncing drive was hopelessly misjudged by Steve Mandanda in the home net, who had to watch as it trundled into the far post.

France were quickly on the front foot once more, with Ribery fizzing a low drive wide before Yoann Gourcuff’s free kick was clutched simply by Navas. But a leveller was coming, and inevitably Ribery was the source, sending a delicate low cross into the box that was turned home by the unfortunate Sequeira, who had been excellent form to that point.

Though les Bleus would continue to control possession and territory, it would be Ruiz who would go closest before the break. Bobbing and weaving along the 18-yard line, the Twente man unleashed a curling left footed drive that Mandanda did well to push away. Less than ten minutes later the same player was left unmarked from a corner kick, bulleting a header against the face of the bar from close range when he perhaps should have found the net.

Domenech’s men were looking in better touch than they had mustered in previous internationals, and they had their moments too. Ribery continued to be the biggest threat, though his run late in the first period ended with Navas making another solid save from an angle inclement to the attack. 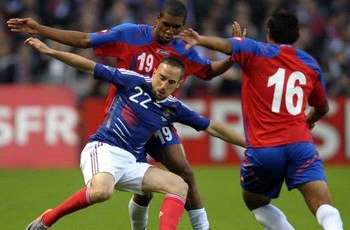 This momentum continued through half-time, with France dominant for virtually the duration of the second period. Ribery continued to be the main worry to the visitors, with a series of darting runs down the left causing mayhem but ultimately ending fruitless.

From the midfield, Gourcuff was looking likely to provide some cutting edge, with a handful of searing efforts from range. The playmaker fired a terrific strike goalwards just three minutes after the restart, forcing Navas to punch spectacularly clear, before trying a swerving drive from the right corner of the box that the unsighted goalkeeper got down well to his left to punch clear for a corner.

With 65 minutes gone, Domenech decided it was time to play his wildcard, replacing Govou with Valbuena. Immediately ‘la Petit Velo’ had an impact, harrying a mistake from the visiting side before tugging a shot wide. A couple of minutes later it was the Olympique de Marseille man’s miscontrol in the box that inadvertently set up fellow substitute Sebastien Squillaci, though the centre-back was foiled by a fine block by Navas.

Only on occasion would Steve Mandanda be remotely anxious during the second period, but Randall Azofeifa stretched the custodian with a well struck shot from range, while Josue Martinez shot a presentable chance from distance wide.

France may have struggled to get near Navas’ goal, but their shooting from distance would ultimately prove decisive. After a positive run from Abou Diaby, Valbuena found himself in possession 25 yards out with plenty of space. Trying his luck, the effervescent midfielder’s low shot skidded into the corner of the net, providing les Bleus with their winning goal.

Andre-Pierre Gignac nearly provided more goals from the bench, but in his seven minute cameo he was denied by Navas and then curled a shot wide.

Whereas France have laboured in friendlies in the past, this was a far more assured performance in all areas of the park, though they will certainly need to smooth out some of their rough edges before the World Cup begins if they are to become truly competitive.

Watch the goals from the game here.