By Stefan Coerts
The Eredivisie returns following the midweek Champions League and Europa League action and an exciting round 10 awaits.
Friday


Round 10 of the Eredivisie kicks off with the meeting between NAC and Roda. The Breda side were left without a chance by Ajax last week and were beaten 3-0. They have dropped to eighth spot in the table following last week's results. Roda on the other hand put in an impressive performance against Vitesse and won their match 4-1. The Kerkrade side have climbed to fourth spot in the table following their recent good form. On Saturday, relegation candidates De Graafschap take on last year's surprise package Heracles. The Superboeren recorded a 2-2 draw against Utrecht last week and will be pretty pleased with their results so far this season. They are the Eredivisie's number thirteen at the moment. Heracles on the other hand have been struggling in the new season and sit only joint sixteenth with eight points. They recorded a 3-2 win against NEC last week though and will be eager to pick up another win this week.

Nijmegen side NEC have been performing rather inconsistent this season and sit eleventh in the table after nine games. They were beaten 3-2 by Heracles last week and will be hopeful of doing better when they take on Groningen on Saturday evening. However, the Green-White Army have been in pretty good form so far and sit joint fourth in the table at the moment. They beat regional rivals Heerenveen 1-0 last week and Pieter Huistra's men will be keen to keep up their good form. Elsewhere, Heerenveen host Limburg side VVV. The home side were beaten 1-0 by Groningen last week and can't afford to spill points again on Saturday if they are to stay in the race for the European places. Expectations were high in Heerenveen ahead of the season, but they sit only tenth in the table. VVV are battling against relegation and are the league's number seventeen with six points from nine games. The Limburgers were beaten 1-0 by AZ last weekend and another difficult match awaits.

Amsterdam giants Ajax travel to Rotterdam on Sunday for the away match against Excelsior. The Godenzonen will be brimming with confidence following their Champions League victory against Auxerre on Tuesday. They currently sit second in the league table, trailing table toppers PSV by only one point. Ajax recorded an easy 3-0 win against NAC last week and they'll be hopeful of picking up three more points on Sunday. However, head coach Martin Jol will have to make do without the services of midfielder Siem de Jong, while Vurnon Anita is doubtful, too. Excelsior are the league's number twelve at the moment with ten points from nine games. They were beaten 2-1 by ADO Den Haag last week and could really use a good result in order to stay clear of the drop zone. 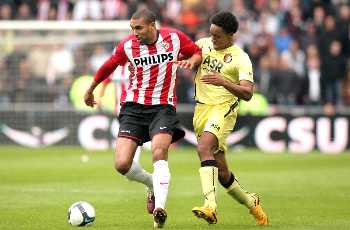 Table toppers PSV await a difficult task on Sunday when they take on rivals Feyenoord. The Eindhoven side have been in impressive form all season long and are still unbeaten after nine matches. They recorded a 4-2 away win against Willem II last week and sit atop of the table with 21 points. They got an additional confidence boost in midweek when they beat Debrecen 2-1 in the Europa League. Feyenoord on the other hand have been in abysmal form this term and have ended up battling against relegation after nine matches. The Stadionclub were beaten 1-0 by Twente last week and sit joint sixteenth in the table with only eight points.

Reigning champions Twente take on ADO Den Haag on Sunday in what promises to be an entertaining match. The Tukkers recorded a narrow 1-0 win against Feyenoord last weekend and currently sit third in the league table. Twente will be a bit disappointed after being held to a draw by Werder Bremen in midweek and they'll see the match against ADO as the perfect opportunity to return to winning ways. ADO have been in excellent form this season and sit sixth in the table at the moment with fifteen points. They beat Excelsior 2-1 last weekend and are pretty high on confidence. Elsewhere, Europa League hopefuls AZ take on Willem II on Sunday afternoon. The Alkmaar side recorded a narrow 1-0 win against VVV a week ago and have climbed to seventh spot in the table after a difficult start to the season. Willem II on the other hand are still struggling to keep up with the other Eredivisie sides, as the Tilburg side sit rock bottom with only one point. They were beaten 4-2 by regional rivals Willem II last weekend. Ambitious Arnhem side Vitesse host Utrecht in the last game of this matchday. Vitesse have been in far from impressive form this season and opted to part company with head coach Theo Bos on Thursday following their poor start. Utrecht have been performing rather inconsistent and currently sit ninth in the league table with thirteen points. They beat Ajax two weeks ago, but were held to a draw by De Graafschap last week.