This week's exclusive extract from Graham Hunter's new book on Barca looks at perhaps the most influential figure in the history of the Catalan club
If the 175,000 FC Barcelona members, or socios, queued up in an orderly line, night after night, to massage his tired feet, cook his dinner and tuck him into bed; if they carried his golf clubs round Montanya’s hilly 18 holes; if they devoted 50 per cent of their annual salary to him … it still wouldn’t be anywhere near enough to repay the debt that those who love this club owe Johan Cruyff


BARCA: THE MAKING OF THE GREATEST TEAM IN THE WORLD
EBOOK AND HARD COPIES OUT EARLY 2012, PUBLISHED BY BACKPAGE PRESS

Without him, there would be no Pep Guardiola, no Leo Messi, no Xavi and no Andres Iniesta. They would have been judged to be too slow, too small – table footballers.

The genius from Amsterdam created the conditions which allowed these incredible players to be recognised and to become central to FC Barcelona’s values. Without Cruyff, this story simply wouldn’t exist.

Even the latest, greatest, Barcelona era has his DNA running through it: the way they train and play, how they recruit players and staff and why entertainment falls only slightly behind victory in their list of priorities.

Twice he made a splash at the Camp Nou – in 1974, when Barcelona made him the first $1m player and in 1988, when he returned as coach with unprecedented success: leagues often won on the last day of the season and usually at the cost of massive humiliation to Real Madrid, the Goliath to Cruyff’s David; four Uefa trophies, the most important of which came in defeating a Sampdoria side starring Luca Vialli and Roberto Mancini to win the 1992 European Cup – Barcelona's first. 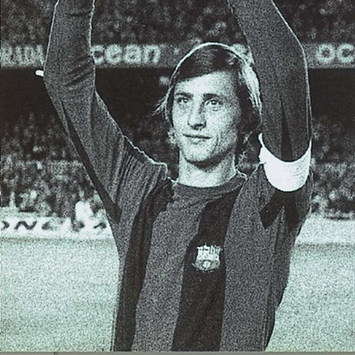 No Cruyff, no Dream Team. No Cruyff, no co-ordinated and prolific cantera trained to play thrilling football. No Cruyff, no Joan Laporta (the club’s most successful president). No Cruyff, no Frank Rijkaard and the resuscitation of a club suffocating in its own stupidity. No Cruyff, no Guardiola. The player-turned-coach maintains he wouldn’t even have been given the chance to stake a claim for a first-team spot had it not been for the visionary faith of the Dutchman and his lieutenant, Charly Rexach.

Make no mistake, the world is still watching the fruition of seeds planted in 1988. When Cruyff returned as coach he disagreed, fundamentally, with the way in which the Barcelona youth system was run. He insisted that it was nonsensical that all the age-category teams were being trained in a playing system which was particular to their specific coach. There was no FC Barcelona credo. What was then 13 youth levels under the first team could mean 13 different playing styles and kids having to re-learn every year.

Cruyff told his employers that a) every youth level must be trained based on the same concepts and in the same 3-4-3 formation, b) the top kids needed to be pushed out of their comfort zone and played at an age group one, or even two years ahead, and c) that those 'perlas de la cantera', the jewels of the youth system, needed accelerated promotion into the first team.


They worked on positional play, one- or, at most, two-touch circulation of the ball, the concept of the sweeper-keeper, squeezing space – all principles which have thrived under Guardiola and Rijkaard. This strategy, plus an adherence to all his teams playing attacking, creative, rapid football based on pressing and accurate passing, is his most enduring legacy.

Cruyff reshaped the structure and content of FC Barcelona’s youth development and some alumni, who would go on to win Champions League medals under Rijkaard and Guardiola, were already in the cantera recalibrated by Cruyff when he was controversially sacked, in the dressing room as his players filed in for training on Saturday, May 18, 1996.


On that day, 16-year-old Xavi Hernandez was part of the Barca youth system and already had five years of La Masia training under his belt. Andres Iniesta was being scouted. Victor Valdes had already spent four years in the youth system at the Camp Nou, and a 17-year-old called Carles Puyol had just been scouted and signed – to play as a winger.

Cruyff’s system was not only able to train players brilliantly once the right ones were selected, but the criteria Barca used while scouting had changed. As a result, the club was now consistently choosing the best young players, or certainly the most appropriate for their philosophy, who would one day provide the spine of the greatest team in the world.

With every extract published, Goal.com will be giving away one copy of Graham Hunter's new book. To have a chance of winning an ebook or hard copy of Barca - The Making of the Greatest Team in the World, answer the following question: Which club did Johan Cruyff play for before joining Barcelona? Send answers to competitions@goal.com - the winner will be announced in next Friday's extract.