By Stefan Coerts
Goal.com’s Stefan Coerts rounds up how the most promising youth players from the Eredivisie and Ligue 1 performed during the last seven days...
NETHERLANDS

Luuk de Jong (27.08.90 – Twente) – The versatile attacker put in a decent performance against Utrecht. Made some dangerouns runs forward and set up the equaliser with a superb individual action.

Nacer Chadli (02.08.89 - Twente) - Chadli capped a good performance against Utrecht by levelling the score from close range after the break. Never shy to track back whenever necessary.

Slobodan Rajkovic (03.02.89 - Vitesse) - His side's best defender in the 1-1 draw against Feyenoord. Rajkovic looked calm and composed on the ball and hardly lost a challenge all match long.

Marcus Pedersen (08.06.90 - Vitesse) -  Very lively after coming off the bench in the second half. Hit the upright with a low shot and saw a good header in the dying seconds of the game saved by the Feyenoord goalie.

Bas Dost (31.05.89- Heerenveen) - The towering striker got two chances to help Heerenveen to the full three points against NEC, but failed to add his name to the score sheet. Aimed his first attempt wide of the target, while his header shortly after was miraculously saved by the 'keeper.

Kolbeinn Sigthorsson (14.03.90 - AZ) - Sigthorsson again showed his superb form when he opened the score early in the first half with a superb finish. Unlucky to eventually end up on the losing side.

Christian Eriksen (14.02.92 - Ajax) - The Denmark international was one of Ajax's key men in recent weeks, but failed to impress against De Graafschap. Lost possession too easily and his passing was far from accurate.

Tim Matavz (13.01.89 - Groningen) - The Slovenia international put in yet another man of the match performance to help Groningen to a 7-1 win over Willem II. Matavz added three more goals to his tally and has now scored 15 goals this term. 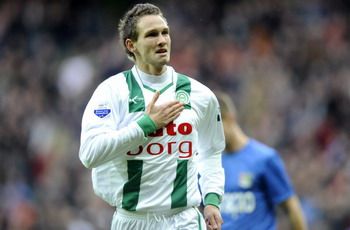 Leroy Fer (05.01.90 - Feyenoord) - Came off the bench in the 65th minute to get his first match action in three months. Feyenoord will be pleased to see that their deputy-skipper is back in action.

Georginio Wijnaldum (11.11.90 - Feyenoord) - Wijnaldum made some good runs forward and always worked hard. Should have scored after bing set up by Castaignos.

Luc Castaignos (27.09.92 - Feyenoord) - Opened the scoring with a calm finish after an intelligent run off the ball and always looked dangerous against Vitesse.

Miralem Pjanic (02.04.90- Olympique Lyonnais) - Replaced Michel Bastos for the final 12 minutes of the game against Bordeaux without affecting the final result.

Kevin Theophile-Catherine (28.10.89 - Rennes) - The young defender was outstanding at the back for Rennes in their 1-0 win over PSG. Never really troubled in his defensive duties.

Yann M'Vila (29.06.90 - Rennes) - The highly rated midfielder made some superb interceptions and showed great vision both on and off the ball. His passing wasn't always spot on, but still a very encouraging performance.

Ryad Boudebouz (19.02.90 - Sochaux) - Boudebouz has been in fine form lately and again looked impressive at the weekend. His creativity and vision resulted in a few good chances for Sochaux.

Mamadou Sakho (13.02.90 - Paris Saint-Germain) - Sakho has been very solid for PSG this term, but the France international struggled against Rennes. His positioning was below par and he lost some important challenges.

Emmanuel Riviere (29.03.90 - Saint-Etienne) - The young attacker was his side's absolute star player in the 2-1 win over Montpellier. Netted a brace to help ASSE to a 2-1 win.

Andre Ayew (17.12.89  - Olympique Marseille) - Came off the bench halfway the second half in his side's 1-0 win over Arles, but was unable to leave his mark on the game.

Mapou Yanga-M'Biwa (15.05.89 - Montpellier) - Did not have the best of games against Saint-Etienne. Lost sight of his direct opponent more than once and looked vulnerable overall. 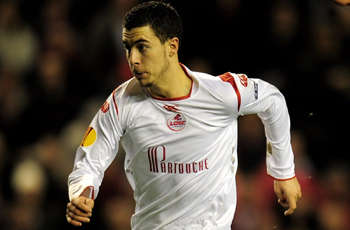 Eden Hazard (07.01.1991 - Lille) - The Belgium international was lively as always and sent in numerous dangerous crosses. Cause his direct opponent all kinds of trouble with his silky dribbles before being taken off in the 77th minute.