Borussia Dortmund's midweek Europa League tie against Qarabag may not have proven too taxing an exercise but it did give the Germans the chance to field in a competitive match their Japanese starlet, Shinji Kagawa. He did not disappoint, scoring twice through a long range effort and a header, signalling yet another sign of promise in an emerging team.

The 21-year-old was signed for a fee of only €350,000 from Cerezo Osaka in May and spent the summer polishing his German language skills. He is now ready to be integrated in first-team duties for Juergen Klopp's charges and is likely to command a starting place when BvB take on Bayer Leverkusen on Sunday. Kagawa has shown glimpses of his talent over the course of the pre-season campaign with Manchester City in particular finding the attacking midfielder hard to handle.

Rated as one of the most highly regarded prospects in the Asian game, the Kobe-born player was offered his first professional contract at Cerezo while still a high school student. He initially showed promise as a central defender but time spent away from home at Miyagi improved his ball skills sufficiently for him to convert to an offensive midfielder. He quickly rose through the ranks in Osaka and featured for his national team at under-20 level in the 2007 World Cup, making his senior debut a year later. However, the 13-times capped Japan international was not selected in Takeshi Okada's final 23 for the 2010 World Cup in South Africa. 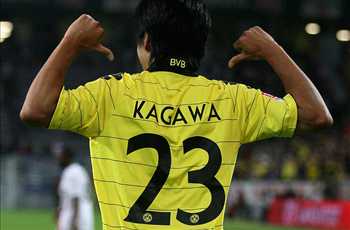 
Dortmund do not have classical playmaker on their hands in Kagawa but he presents himself as a thoroughly 'modern' player, who can quickly transform defence to attack. Kagawa is by no means an artist in possession of the ball but has good, functional technique and shoots well from distance. He does not look to overcomplicate things while on the ball and is capable of providing unerring through passes and dribbles. He is likely to find himself inserted just behind Lucas Barrios at the top end of Dortmund's formation this season although he is also adept at lining up on either flank in a 4-2-3-1.

The general consensus around Westphalia, following a relatively successful pre-season, is that Klopp has unearthed quite the gem.