While eyes around the globe are currently fixated on the European Champions League, the Copa Libertadores is also well underway and South America’s premier club competition has brought one of the continent’s brightest talents to the fore.

Rather than name him after one of Colombia’s famous footballing sons – such as Carlos Valderrama or Arnoldo Iguaran – the story goes that James Rodriguez’s parents were fans of the big screen, and instead named him after James Bond. While the Colombian has not grown up to be a suave secret agent, he is developing into one of the country’s most exciting footballers for generations and has even been likened to Real Madrid superstar Cristiano Ronaldo.

Rodriguez’s career began at modest Envigado after excelling in youth football in Colombia, making his debut when he was just 14 years old. While the club were relegated in 2006, his breakthrough season came the following year as he helped Envigado back to Colombia’s top flight as well as competing in the 2007 South American Youth Championships.

European scouts converge on these championships as moths to a flame, and among those to earn moves across the Atlantic following the 2007 tournament were Alexandre Pato, Edinson Cavani and Luiz Adriano. Less heralded than the other promising talents was Rodriguez, who played all eight games as Colombia finished a respectable second behind Brazil. ‘Jesse James’ scored three times in the second group phase, and his strong performances in the competition earned him a ticket to the Under-17 World Cup in South Korea in the summer. Rodriguez played all three group games for los Cafeteros, but missed out on the second round defeat to Nigeria.

Lighting Up The Apertura

The performances of the 16-year-old did not go entirely without notice, and Banfield moved swiftly to take him to Argentina in early 2008. ‘El Taladro’ (the Drill) took him with an option of buying 50 per cent of his rights for $400,000 when he turned 18, and he certainly did not disappoint when they took it up.

Rodriguez became the youngest ever foreigner to play in Argentina’s top flight when he made his debut as a 77th minute substitute against Godoy Cruz at 17 years old in the 2009 Clausura. Independiente’s Sergio Aguero holds the record for youngest ever player at 15 years, one month and five days old. Rodriguez then became the youngest ever foreigner to score in the Primera Division as he scored with a stunning left footed strike from 20 yards, 10 minutes after coming off the bench against Rosario Central. 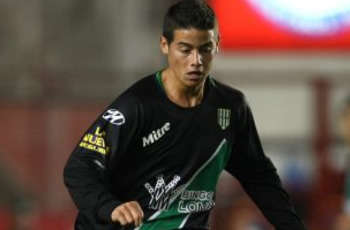 Rodriguez really came to the fore following the sale of Nicolas Bertolo to Palermo last summer. Playing in his favoured role of enganche – similar to the Italian trequartista role – or on the left side of a four-man midfield, Rodriguez showcased his skill on the ball and superb technical ability in the 2009 Apertura. ‘El Pistolero’ is also a very direct player with a devastating shot from range – as he has demonstrated on a number of occasions, such as against Velez Sarsfield – and his desire to be on the ball extends to the defensive phase whereby he will work hard to recover a lost ball.

With Walter Erviti and Maximiliano Bustos alongside the precocious Rodriguez, ‘El Taladro’ won their first ever Argentine league title to qualify for this year’s Copa Libertadores. Rodriguez was instrumental in the Apertura victory as he missed just two games of the campaign and scored three goals, including the second in the Clasico del Sur against Lanus. Picking the ball up on the left wing, Rodriguez flicked the ball infield before continuing his run and, after receiving the return pass, nonchalantly chipped the ball over Agustin Marchesin to wrap up the game against Banfield's fierce rivals.

The true test of an aspiring footballer comes in the Copa Libertadores, where South America’s finest sides test physical attributes – both from the players themselves and the varying climates and altitudes around the continent – to the limit. Alianza Lima may be starring as a collective, but Rodriguez is already putting himself forward as a candidate for player of the tournament with his performances thus far. Goals against Morelia and Deportivo Cuenca were followed by a brace against Nacional to put Banfield in a strong position to progress from Group 6.

Unfortunately for Rodriguez, Colombia will not be at the 2010 World Cup after their strikeforce managed a meagre 14 goals in qualifying, resulting in a 7th placed finish in the CONMEBOL zone. While he may not yet be able to broadcast his talents on world football’s grandest stage, Italian sides are already taking note of his performances. Reports in Argentina claim that Udinese – a club renowned for its ability to nurture South American talent – have already agreed a deal to sign Rodriguez following the conclusion of the Copa Libertadores. Whether ‘Jesse James’ is to join the Zebrette remains to be seen, but it is certain that the prodigious 18-year-old will be gracing European football before long.