With only one participation at the 2006 World Cup - in the "Group of Death" with Argentina and the Netherlands - the Ivorians showed what they were capable of in Germany, but their lack of experience at that level didn't allow them to fully explore their potential.

But four years later, with some of the best players on the planet now blossoming on their team, everyone is expecting them to do better, and they will undoubtedly have to live up to those high expectations. Along with Ghana, the Elephants are the African continent's great hopes for the next World Cup.

In a group composed of Guinea, Burkina-Faso and Malawi, it was fairly foreseeable that the Elephants would be the team going through to the World Cup, even though Burkina and Guinea were seen as the "Young Guns" of African football before the campaign.

Starting by humiliating Malawi 5-0 in what will be remembered for the Houphouet Boigny Stadium catastrophe, they went on to beat Burkina-Faso and Guinea in away games. In the return phase they gave Burkina another 5-0 thrashing before finishing the campaign off by drawing to Malawi and letting their B-team oust Guinea.

With Didier Drogba, Salomon Kalou, Gervinho, Aruna Dindane, Amara Diane, Bakari Kone, and many more, Cote d'Ivoire's firepower seems endless. With strikers starting in some of the most successful European clubs, the Ivorians seem to have one of the most impressive attacking lineups in the tournament.

The main weakness of the team will be the tremendous egos that are in it. Despite an overall great ambiance, the competitive aspect of things has proven to be a negative catalyst over the last year, as several fights have erupted during their qualifying campaign.

Sven Goran Eriksson needs no introduction. Already a veteran of two World Cups when he led England to the quarter-finals, the sophisticated Swede has coached in his homeland, Italy, Portugal, England and was recently in charge of Mexico. His African adventure is a first and it remains to be seen if he is the right man to bring a talented group of players together. Still, Eriksson is as experienced and unflappable as they come...

Their best moment of international football was during the 1992 African Cup of Nations in Senegal, where they won the trophy on penalties against an Abedi Pele-less Ghanaian side and an amazing Alain Gouamene. They have not managed to find the tournament-winning alchemy since then, though, and the clock seems to be running out for this generation.

Off The Pitch
Famous for: Their local gastronomy: Atieke and Aloko bananas, a vast amount of coffee, delicious fruits, and also cacao. Abidjan is the biggest port in West Africa, and much of the world's best produce leaves its shores.

Most likely to: Have all their fans mixed up with Netherlands fans as they also move dipped in orange from head-to-toe.

World Cup Objective
Getting out of the group stages is expected from them, and making it to the quarter-finals will definitely be an objective for the Elephants as well. With this much quality on paper they should at least go further than they did in Germany, but finding themselves in the group of death alongside Brazil and Portugal will present a difficult task indeed. 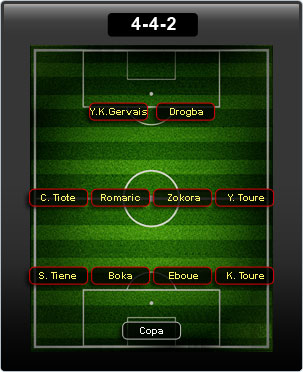