Do Les Bleus have a chance of making a splash in South Africa?

Background
In 1958, the French finished third with great players like Just Fontaine, who set the record of goals scored in a final phase of the World Cup with 13 strikes. France also finished third in 1986 and fourth in 1982. Les Bleus won the World Cup on home soil against Brazil in 1998 (3-0) and finished second in 2006.

How Did They Qualify?

Not the greatest way to qualify we must admit. Thierry Henry's handball has been broadcast all over the world and a lot of people think that France should not be in South Africa. France has always struggled to qualify to these big events but is here for the fourth time in a row, a record for the country. They made a bad start to their campaign by losing to Austria. Les Bleus were unlucky in Romania where they only managed a draw and salvaged a point against Serbia, where France played with ten men after Hugo Lloris was sent off in the eighth minute. Against Ireland in the play-offs, France had the opportunities to score two goals at Croke Park but were in danger of being eliminated in Paris. We all know what happened next...

France have a great team...on paper. Their players ply their trade for the biggest clubs in the world (Real Madrid, Chelsea, Arsenal, Lyon, Barcelona), so the squad has potential to win the World Cup. France have a great attacking team with Nicolas Anelka, Franck Ribery, Thierry Henry and Yoann Gourcuff.

Les Bleus have not found a good balance in central defence. William Gallas is good but Eric Abidal is not a central defender. Additionally, the former has fitness doubts. Furthermore, the relationship of the players on the pitch is not good. In France we think that Sebastien Squillaci should play centre-back alongside Gallas. And finally we have Raymond Domenech, who is a major weakness!

Raymond Domenech might be most hated person in the world of football. He has made a lot of errors in the past, fewer now than previously, though his management style is very unpredictable. There is not too much debate in France about the players he chooses, but how he manages the team is a question that nobody can answer. It will be his last competition in charge of the side as Laurent Blanc is being lined up as the new boss.

The two years that France dominated the world with the 1998 World Cup victory at Stade de France and the Euro 2000 victory against Italy. It was the first time in history that a team held the World Cup and European crown at the same time.

Famous for: France is famous for its food, its beautiful country, fashion, its contradictions. Les Bleus are also World champions and Olympic champions at handball. Paris is the most visited city in the world.

Most likely to: make a bad start in the competition and struggle in the group phase before finally winning big matches...

France is there to win the World Cup. They have the players to do it, but maybe not the coach. It's sure that France are a team that many will want to avoid, and les Bleus will fear no-one. They key will be Ribery. If he is at full strength, then they will not be far from the title again. 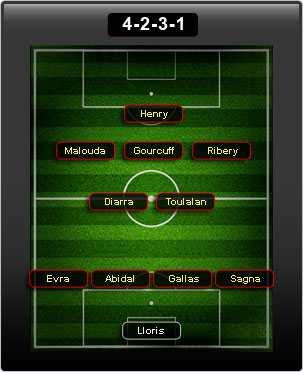