Background
Germany are regulars at the World Cup and are always among the favourites to lift the trophy. South Africa 2010 will mark the 17th appearance for the Germans at the tournament, having only missed the finals in 1930 and 1950. They picked up their first World Cup win in 1954 in Switzerland and in 1974 they won it again as hosts. Their last World Cup trophy was won at Italia '90 after beating Argentina in the finals. Besides 1974, Germany also hosted the 2006 tournament, where they won the third place medal.

How They Qualified
In Group 4 of the European qualifying zone, Joachim Loew's men finished in first place ahead of Russia, being one of five European teams that went undefeated in the group stages. As with most German teams in the past, the 'Nationalmannschaft' delivered their best performances in the most critical encounters. The Germans beat Russia 2-1 in Dortmund and also won the return 1-0 in Moscow.

Fitness, motivation and organisation are the key driving forces for the German national team. In every big tournament it is difficult to master their 'Teamgeist'. Also, in 10 qualification matches they only conceded five goals. Any opponent who has played against Germany knows their physical toughness as well as their organised team play.

Weaknesses
The Germans have been unable to pick up victories lately against 'big nations' like Brazil, Spain and Italy. In the 2006 World Cup, they lost in the semi-finals against Italy and in Euro 2008, Loew's men lost in the final against Spain.

Joachim Loew was the assistant coach to Juergen Klinsmann during the 2006 World Cup. The media speculated that Loew took care of the tactics while Klinsmann was only the motivator. Loew looks like a typical 'nice guy' but the fact is he has clear ideas of his team. So it's no surprise, that some stars of the past won't get another chance, if Loew thinks they are not compatible with the team. The best example of this is Torsten Frings.

Helmut Rahn's goal in the 1954 final which was the game winner in the 3-2 victory over a Hungarian side that had not lost since 1950. After the victory, the team became known as 'Das Wunder von Bern'.

Off The Pitch
Famous for: Very good beer. Football fans love to go their favourite team's away matches and drinking lots of beer. Supporting their clubs away is a must for a 'real fan'.

Most likely to: Win at least one penalty shootout


World Cup Objective
The semi-finals are the minimum target as expected by the fans. 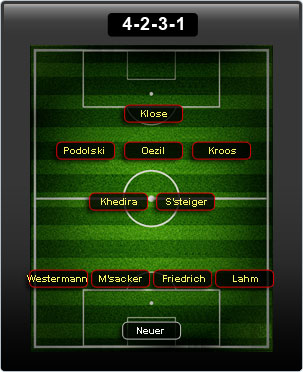