By Al Hain-Cole
The home side have a mountain to climb after the first leg, and Al Hain-Cole thinks that even the absence of Gareth Bale will not stop Spurs from matching them in an open match
After securing a 3-0 home victory in the first leg, Tottenham’s Europa League trip to Inter should be nothing more than a formality.

However, Andre Villas-Boas insists that he is taking nothing for granted, and has promised to field as strong a line-up as possible in order to get the job done in the San Siro.

Although it may be asking too much for i Nerazzurri to qualify for the quarter finals, they are favourites at 13/10 (2.30) with Bet365 to restore some pride by coming out on top in this match.

Having lost their eight-match unbeaten streak with defeat at Anfield on Sunday, Spurs are available at odds of 9/4 (3.25) to bounce back with a victory this evening.

The Londoners are yet to win on the road in Europe this season, having drawn all four of their away ties so far, and may struggle to break that duck without their suspended match-winner Gareth Bale.

Considering Andre Stramaccioni’s men have shared the spoils in three of their last five matches on home turf in this competition, it is certainly well worth backing this game to finish all square, at handy 13/5 (3.60) odds.

Bale’s absence leaves his team-mates with a point to prove, as they will no doubt be keen to dismiss accusations of being over-reliant on the Wales international. 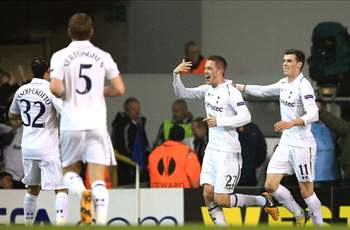 The likes of Sigurdsson, Defoe and Lennon will be keen to show what they can do, and can be confident of getting on the score-sheet against a defence that has only kept clean sheets against Cluj in the last 13 games.

However, they may have to weather an early storm as the hosts come out of the blocks in search of a way back into the tie, and it will be no mean feat to contain a side that have scored in each of their last five home games in this competition.


Sign up with bet365 for up to £200 in free bets
Al Hain-Cole is a Liverpool fan, experienced tipster and avid follower of European football. He specialises in accumulators and if you would like to read more from Al you can follow him on Twitter here.