By Steven Saunders
From Bremner's miss against Brazil to Sneijder's swaggering masterclass
It was only natural that when Gerard Pique diverted a James Morrison cross into his own net on Tuesday night that Scotland supporters nearly tore the roof off Hampden Park.

They had been 2-0 down to world and European champions Spain just 10 minutes earlier – now it was 2-2 and anything was possible.

But the Tartan Army should have known better. Instead of celebrating, they should have just started streaming for the exits. Glorious failure was beckoning – again.

It is something the Scotland national team has mastered like no other over more than 35 years. Just when a famous result seems likely, they will contrive to find a way for it all to fall apart.

And so it was on Tuesday night. Stephen McManus – inspired in defence throughout the night – took leave of his senses and misjudged a Joan Capdevila cross horribly, leaving substitute Fernando Llorente unmarked to crash home a close-range volley. Scotland 2 Spain 3, fightback over.

Let’s not kid ourselves: Scotland do plain old failure pretty well, too. But few countries have conjured so many ways to fill their fans with hope then smash it out of them.

Scotland’s first ever appearance at the World Cup finals pitched them into a fascinating group against minnows Zaire, powerhouse Yugoslavia and defending champions Brazil.

The draw worked against them, as an opening 2-0 victory over Zaire was to eventually undermine their campaign.

There then came an incredible 0-0 draw with Brazil in Frankfurt, remembered most vividly for Billy Bremner’s incredible miss from point blank range.

And so they faced Yugoslavia knowing a win would send them through – instead a 1-1 draw saw them exit the competition on goal difference yet still undefeated. 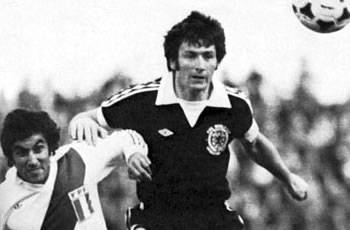 It was a different story four years later. Ally MacLeod convinced a nation that Scotland weren’t going to Argentina to compete in the World Cup – they were going there to win it.

A huge contingent followed the team to South America, but it all came horribly unstuck. Joe Jordan put the Scots ahead in their first game against Peru, but they then collapsed to a 3-1 defeat. Arguably worse followed, a 1-1 draw with Iran meaning the total-footballing Netherlands needed to be defeated by three clear goals.

It looked over when Rob Rensenbrink scored a penalty to put the Dutch ahead, but then Kenny Dalglish and an Archie Gemmill double – his second goal passing in to Scottish and World Cup folklore - put the Scots 3-1 ahead with 22 minutes remaining.

And then came the sucker punch: a stunning strike from Jonny Rep that fizzed into the top corner and popped Scotland’s bubble. A 3-2 win over the greatest team never to win the World Cup was not enough to prevent another first-round exit. 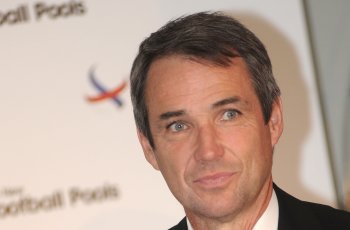 Spain 82 followed a similar pattern to Germany 74. The minnows came first, New Zealand defeated 5-2, and that result was eventually to be Scotland’s undoing.

The next game was Brazil, again, and this time David Narey fired Scotland into a stunning lead. It didn’t last, as a Zico-inspired Brazil romped to a 4-1 win.

It meant Scotland needed to defeat the Soviet Union in their final group game to progress to the next round. Jordan scored for the third successive World Cup finals to put them 1-0 ahead, then Aleksandr Chivadze equalised on the hour mark.

Then calamity struck. Alan Hansen and Willie Miller collided needlessly on the halfway line, and Ramaz Shengelia raced away to make it 2-1 with six minutes left. Graeme Souness equalised soon after, but it was his Liverpool team-mate Hansen’s mistake that proved costly. As the Match of the Day pundit himself would have said, “terrible defending”. 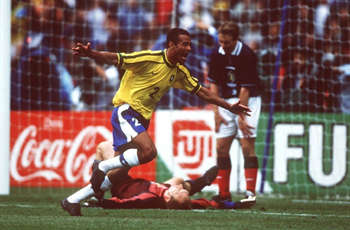 Craig Brown led Scotland to the World Cup finals in 1998, and the draw pitted them once again with Brazil, the holders, in the opening game of the entire tournament in Paris.

This was the Brazil team who famously played football in an airport for an advert, and included such revered names as Ronaldo and Roberto Carlos. The game started badly too, Cesar Sampaio putting Brazil ahead after only five minutes.

Yet somehow Scotland earned a penalty, converted by John Collins, and a stunning, organised performance looked to have silenced the world champions.

But when Cafu burst into the box with 17 minutes to go, his goalbound shot rebounded of goalkeeper Jim Leighton, into the chest of the covering defender Tom Boyd and slowly bounced over the line for the winning goal. A cruel end to a valiant effort. 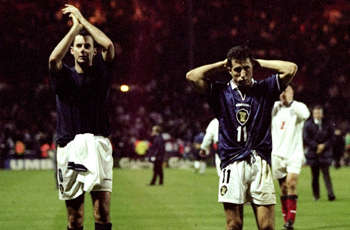 The draw for the play-offs for Euro 2000 set up a rare competitive clash with the Auld Enemy England in the autumn of 1999.

An eagerly anticipated meeting over two legs looked to have been killed off a quarter of the way through the first match, with Paul Scholes scoring twice at Hampden to seal a 2-0 win.

But Brown drew up a tactical masterplan for the return leg at Wembley four days later, and Scotland simply played Kevin Keegan’s hosts off the park.

Don Hutchison (an Englishman by birth) headed in the only goal of the game, David Seaman somehow blocked a flying header from Christian Dailly late on, and England survived. 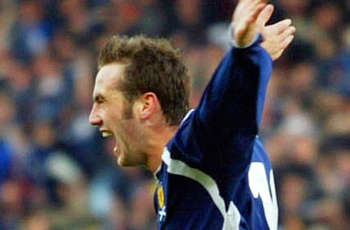 Scotland seemed to have mastered the “falling behind then almost getting back into it” type of glorious failure, so now was time for another route.

The Netherlands were the opponents in the play-off for Euro 2004, and James McFadden’s deflected goal at Hampden brought an incredible win for a side that had failed to beat the Faroe Islands at the start of the campaign under beleaguered manager Berti Vogts.

And so to Amsterdam the Tartan Army went, dreaming of holding out for the draw that would have sent them to Japan and Korea the following summer. Instead, the Scots were annihilated.

A young Wesley Sneijder orchestrated the mayhem, Ruud van Nistelrooy scored a hat-trick, and it was 6-0 by the 60-minute mark, at which point the Dutch took pity on their visitors and stopped scoring.

It seemed that Scotland's absence from a major finals was set to end in incredible fashion as they mixed it with Italy, France and Ukraine in qualifying for Euro 2008.

Two 1-0 wins over the French, plus a fantastic 3-1 win over the Ukrainians at Hampden, were pitted against defeats in Milan and - worst of all - Georgia to leave Alex McLeish's men in with a fighting chance going into the final window of matches.

World champions Italy came to Hampden, with the winner of the match guaranteed a place in the finals. A draw, and Scotland could qualify so long as France lost to Ukraine in their final match four days later.

A pumped-up Hampden fell silent after just two minutes as Luca Toni fired Italy in front. Scotland steadied the ship, and skipper Barry Ferguson slid home an equaliser midway through the second half that offered a ray of hope.

That was extinguished deep in injury time. Alan Hutton was penalised for a non-existent foul on Toni, and Christian Panucci headed in from the free-kick. Suddenly all the permutations no longer mattered - Scotland were out.