By Anthony Wright
With Roma and Inter still vying for title glory this season, Goal.com looks back at the best final day showdowns from the past…
10) 2000/01 – Roma

Although they led the way for almost the entire season, Roma’s third Serie A title was not sewn up until the final day. Almost no one was able to keep pace with Fabio Capello’s side, who led second-placed Juventus by nine points at the start of April. The lead was cut to two by the final day though and it seemed as though the Bianconeri might be able to snatch the scudetto out of the Giallorossi’s grasp. Just minutes after the final round of fixtures kicked off on June 17, Juventus stormed into the lead at home to Atalanta through David Trezeguet. It could have become a nervous afternoon for the Lupi faithful, but first half goals from Francesco Totti and Vincenzo Montella soon settled any unrest as Roma took charge against Parma. While the Old Lady won 2-1 against the Orobici, it was not enough as Gabriel Batistuta added a third for Roma, who brought the scudetto to the Giallorossi half of Rome for the first time since 1983.

Fiorentina led the way in the 1998/99 season early on before being displaced at the top of the table by Lazio. An incredible late-season run by Milan saw them eat into the Biancocelesti’s seven point lead and when Sven-Goran Eriksson’s side stumbled against the Viola on the penultimate day, the Rossoneri leapfrogged them into first place. Just one point separated the two sides with one game remaining, and Alberto Zaccheroni’s side had a far easier game in prospect against Perugia than Lazio, who faced Champions League-chasing Parma. The Biancocelesti ground out a 2-1 victory against the Ducali with a brace from Marcelo Salas, but it was not enough as Milan won at Perugia following goals from Andres Guglielminpietro and Oliver Bierhoff. A late penalty from Hidetoshi Nakata had given Lazio fans brief hope that an equaliser was on the way, but it was not to be and Zaccheroni’s men held on to clinch a famous scudetto victory.

Inter led Serie A in 2007/08 from almost start to finish, but a late stutter almost let the Giallorossi snatch it from their grasp. Roma were four points behind the leaders for much of the latter half of the campaign, just out of touching distance, but Inter’s defeat in the Derby della Madonnina to Milan and their home draw against Siena in the penultimate game meant that Luciano Spalletti’s side were just a point behind on the last day of the season. Mirko Vucinic’s early goal against Catania enabled Roma to leapfrog Inter into first place where they remained until half time. The Nerazzurri were struggling at Parma, but Zlatan Ibrahimovic’s introduction turned the tide and the Swede scored a brace to break Giallorossi hearts. Jorge Martinez scored an equaliser for Catania as Roma knew the game was up, and the Nerazzurri retained their title. 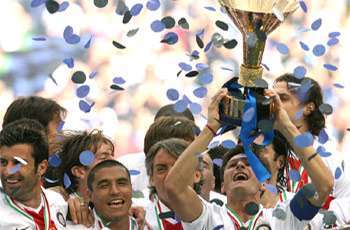 After 10 consecutive wins, Bologna emerged from the rest of the pack to join the title chase. Charges of five Rossoblu players taking amphetamines were proved false in February, and they continued to lead the race. The Rossoblu were unable to shake off Inter as they shared the lead, and both sides knew on the final day that dropped points would almost certainly result in a lost title. The Nerazzurri inched past Atalanta 2-1, while Bologna scraped a 1-0 victory at Lazio after Helmut Haller converted a 17th minute penalty. The title would be decided by a play-off. Tragedy struck Bologna as president Renato Dall’Ara collapsed and died of a heart attack a few days before the play-off, but they still beat the reigning champions 2-0 courtesy of an own goal by Giacinto Facchetti and a late second from Harald Nielsen to claim their seventh and – to date – final scudetto.

Juventus had dominated the Italian league after it turned professional in 1929, winning four straight scudetti after Ambrosiana-Inter (modern day Inter) had won the league in 1929/30. The Bianconeri held the outright lead in 1934/35 after just two games, but fell away midseason as Fiorentina rose from nowhere to gain first place only to fall by the wayside on the penultimate day. As a result, Juventus were level on points with Ambrosiana-Inter as Italy prepared for the final match of the season. The Viola, whose scudetto hopes had been dashed following a loss at home to Alessandria the previous week, travelled to Juventus while Ambrosiana-Inter hosted Lazio. In contrast to the 2009/10 season, the Biancocelesti took the fight to their opponents and came away with a 4-2 victory. Meanwhile in Florence, Giovanni Ferrari scored an 81st minute goal for Juventus to seal a 1-0 win and their fifth straight title.

The Bianconeri had the chance to sew on a second gold star to their shirts if they won the title in 1981/82, but they did not grasp it until very late in the day. Juventus had been competing in an enticing title race with Tuscan rivals Fiorentina, with Roma a few points behind, but the top two were tied on 44 points on the final day of the season. Juventus faced Catanzaro on the final day while the Gigliati took on Cagliari. Fiorentina felt hard done by when Daniel Bertoni had a goal harshly ruled out for a foul on the Isolani goalkeeper before news filtered through that Liam Brady had scored a penalty for Juventus to put the Old Lady in first place by a point (only two points were awarded for a win at this stage). The Viola needed to find a goal in order to wrest the title from the Bianconeri’s grasp, but Cagliari’s defence held firm and ensured that the game ended goalless. It may have been Brady’s last ever game for the Bianconeri, but his goal secured the club’s 20th scudetto in the same season that Milan were relegated. 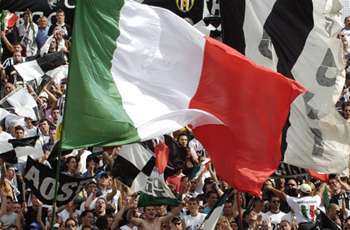 After Inter had set the pace for much of the 1966/67 campaign, Juventus completed a comeback that included a narrow victory in the Derby d’Italia against the Nerazzurri. Despite the Bianconeri renaissance, Helenio Herrera’s ‘Grande Inter’ were a point ahead of their Turin rivals on the final day and only had to beat modest Mantova at home to win their third straight title. Potential triumph turned to disaster though when a calamitous error by Nerazzurri goalkeeper Giuliano Sarti consigned Inter to a shock 1-0 defeat, and the door was open for Juventus. The Bianconeri were grateful recipients as they beat Lazio to 2-1 following second half strikes from Giancarlo Bercellino and Gianfranco Zigoni (father of Milan striker Gianmarco) to reclaim the title. It was the end of the great Inter side of the 1960s, as they had lost the European Cup final to Celtic days earlier.

Inter were top of Serie A for much of the 2001/02 campaign, although Chievo Verona, Roma and Juventus all held top spot at various points of the season. It was the Nerazzurri who held the title in the palms of their hands on a fascinating final day though. Inter, on 69 points, had to travel to Lazio while the Bianconeri had a trip to Udinese. Roma had an outside chance of retaining their title but had to rely on the top two both losing. Christian Vieri and Luigi Di Biagio twice gave the Beneamata the lead, but Karel Poborsky pegged them back on both occasions. One goal could have given Inter the title, but Diego Simeone and Simone Inzaghi scored in the second half to complete a 4-2 win for Lazio in a startling parallel to the 1934/35 season. The door was now open for Juventus to claim the title, and early goals from David Trezeguet and Alessandro Del Piero ensured that the title would be returning to Turin. Meanwhile Roma’s win, courtesy of a lone Antonio Cassano strike, meant that Inter finished third after leading the way 90 minutes earlier.

Lazio had been nine points behind leaders Juventus with eight games to go, but the Old Lady suffered defeats to Milan, Lazio and Hellas Verona to allow the Aquile back into the race. Even so, the Bianconeri were two points ahead of Lazio on the final day and only had to beat Perugia to win the title. In sunlit Rome, Eriksson’s team did their bit by thrashing Reggina 3-0, with goals from Simone Inzaghi, Juan Sebastian Veron and Diego Simeone. The rain was heavy in Perugia, however, and referee Pierluigi Collina considered abandoning the game due to the wet conditions. Instead, the second half was merely delayed by an hour. After five minutes of the second half, a defensive error led to Alessandro Calori giving the hosts a shock lead before Gianluca Zambrotta was sent off for Carlo Ancelotti’s men. Juventus were unable to recover, and so after enduring agony on the final day the previous year, Lazio fans experienced the unbridled joy of winning their second scudetto. 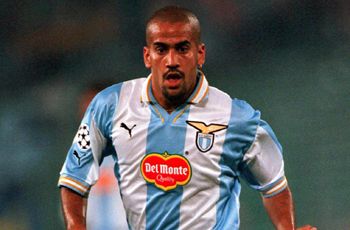 The title had seemed beyond Juventus as with six games remaining, they were five points behind leaders Milan (at a time of two points for a win). The Rossoneri contrived to throw away their advantage, but were still one point ahead of Juventus and Lazio on the final day. The last 90 minutes of the season were filled with drama. Milan, who were within touching distance of their 10th title, were down by four goals against Hellas Verona at half time. Juventus were also losing against Roma at the break while Lazio were being held by Napoli. A play-off between the Laziali and Rossoneri beckoned, but Jose Altafini equalised for the Bianconeri in the second half. All three teams were on 44 points with minutes of the season remaining before Antonello Cuccureddu scored a winner three minutes from time for Juventus. Lazio eventually fell to a 1-0 defeat, while Milan had been humbled 5-3 by Hellas on a dramatic final day that saw the Old Lady pick up her 15th scudetto.