Francesco Totti is a Roman legend and is said to be the footballing king of Rome. At 34 the former Italy international remains the Giallorossi’s talisman and on Sunday afternoon in the Derby della Capitale he once again made his mark.

Roma headed into the encounter in sixth place in Serie A, five points adrift of Lazio, who were then fourth. A defeat would have virtually wiped out the Lupi’s chances of qualifying for next season’s Champions League but Totti’s brace have kept their hopes burning.

The Roman’s first came on 70 minutes when he scored from a free-kick, and then in injury time he slotted home a spot-kick that secured a 2-0 victory.

It was not just two those moments that established the veteran as the best player on the pitch; there were occasions throughout the 90 minutes when Totti showed his touches as he played some brilliant passes to Jeremy Menez, Mirko Vucinic and Nicolas Burdisso.

It was Roma’s fifth successive derby triumph over Lazio that also includes a Coppa Italia victory earlier this year and has now placed the Maggica in sixth place, just a couple of points behind the Aquile and four off a Champions League slot. 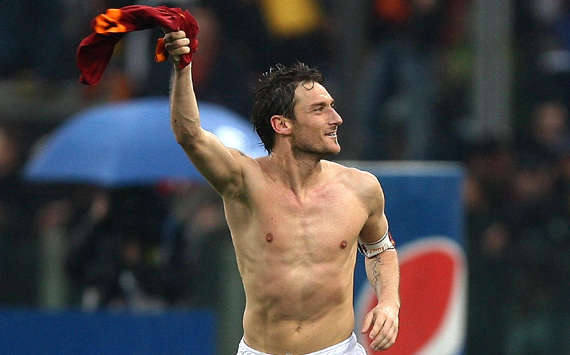 Nilmar came on as a substitute in Villarreal’s Europa League game against Bayer Leverkusen in Germany on Thursday evening with just over 20 minutes of normal time left and scored twice with two shots. The Brazil international striker’s first came on 70 minutes and deep into injury time he scored his second with a brilliant finish. The Yellow Submarine lead the tie 3-2 after the first leg with the return game this week.

Bayern Munich put an end to their three-game losing streak on Saturday afternoon after a comprehensive 6-0 defeat of Hamburg in the German Bundesliga. At the heart of this triumph was Arjen Robben, who scored a hat-trick. The Netherlands international winger emerged as the Bavarians’ best player in 2009-10 and ahead of their Champions League clash with Inter on Tuesday evening, the former Chelsea and Real Madrid star seems to have recovered his rhythm.

Schalke are struggling in the German Bundesliga but are going great guns in the Champions League. Last week the Royal Blues threaded their way into the quarter-finals of the competition by defeating Valencia 3-1 at home in the second leg of their last 16 clash, winning the tie 4-2 on aggregate. The man behind the triumph was Jefferson Farfan. The Peruvian winger has been a bright spark for Schalke this campaign and scored twice against los Che and was also involved in the second goal.

Dmitri Loskov captained Lokomotiv Moscow in their Russian Premier League fixture against Dynamo Moscow at the weekend. He thus became the only player to have featured in all 19 seasons of the Russian Premier League since it’s creation and celebrated this historic achievement with a 3-2 victory. Loskov is now tied with Oleg Blokhin, who played 19 consecutive seasons during the Soviet League (1969-88) for Dynamo Kyiv.

Sevilla held Barcelona to a memorable 1-1 draw at home in the Spanish Primera Division on Sunday evening and once again it was winger Jesus Navas who was the star for the Nervionenses. Besides scoring the equaliser four minutes after the half-time interval, the Spain international was a regular menace in the second session. In the first-half Navas rose to the occasion and defended for his team.

Serie A’s bottom side Bari carved out a sensational 1-1 draw with Milan at San Siro in Serie A on Sunday afternoon to inflate their confidence but the man they should be most thankful to is a certain Jean-Francois Gillet. The goalkeeper denied Zlatan Ibrahimovic, Alexandre Pato and other Milan attackers throughout the 90 minutes and made no fewer than six saves.

Luuk de Jong inspired Dutch champions Twente to a 3-0 victory over their Russian counterparts Zenit St Petersburg at home in the first leg of their last 16 clash in the Europa League last week. He scored twice, first after 25 minutes from close range and then in injury time when he headed home Theo Janssen's cross from the left-wing.

Ezequiel Lavezzi returned from suspension on Sunday evening to help his side defeat Parma 3-1 away from home in Serie A. The Argentina international missed the Azzurri’s last two league encounters and they failed to win, but his return seems to have rejuvenated Walter Mazzarri’s side. Lavezzi was rather quiet in the first-half but came to life in the second session, providing the assist for Marek Hamsik’s goal and scoring on 58 minutes.

Tottenham Hotspur played a very defensive game against Milan in the second leg of their last 16 clash of the Champions League last week, and at the heart of their triumph in holding the Italian giants to a goalless draw at White Hart Lane and progressing to the quarter-finals of the competition 1-0 on aggregate was William Gallas. The French centre-back was a rock at the back, stopped the Milan attackers and along with Michael Dawson foiled the Rossoneri’s attacking moves. Gallas also made a goalline clearance in the first-half that is probably a symbolic significance of Spurs’ triumph over their more illustrious rivals.

Teofilo Gutierrez has hit the ground running since leaving Trabzonspor for a move to Argentina. The Colombian striker scored a brace in Racing Club's 4-0 victory over Colon in the Argentine championship that saw his side climb to the top of the table. Gutierrez has now scored five goals in three starts.

Erik Paartalu scored a vital goal for Brisbane Roar in their game against Central Coast Mariners that propelled them on the way to their maiden A-League title. His last minute equaliser in extra-time saw the match go into penalties, which Roar won 4-2.

Leave your notes of congratulations for Francesco Totti below, or discuss who else deserves a place in the sun this week...