By Subhankar Mondal
Join Goal.com in saluting another player worthy of global recognition…
Welcome to Goal.com's regular feature: Goal.com World Player of the Week. Each week our worldwide team of editors will put forward a selected candidate, as chosen by Goal.com International, who deserves recognition for achieving something special that matchday. It won't necessarily be the best player in the world - at least not usually - but whoever we nominate will have done something amazing. It might be for a particularly awesome performance or for something praiseworthy off the pitch - either way, the person in question deserves special attention...

Many would acknowledge that Dirk Kuyt is not one of the most talented footballers and lacks the genius that some of his Liverpool team-mates have. Yet against Manchester United at Anfield in the Premier League on Sunday afternoon, the Netherlands international forward wrote himself into the history books as he combined intelligence with hard work to inspire the Reds to a 3-1 destruction of the current league leaders.

Starting as the lone striker in attack with Luis Suarez just behind him, Kuyt scored his first goal after 34 minutes when he tapped in from just yards out after Suarez had skipped past three United players and squared the ball through goalkeeper Edwin van der Sar’s legs.

Five minutes later the former Feyenoord forward nodded home from close range after Suarez’s cross was headed back into his own six-yard box by winger Nani.

The 30-year-old’s third was yet another instance of him being at the right place at the right time, as on 65 minutes Van der Sar failed to claim Suarez’s free-kick and Kuyt slotted the ball home to accomplish a first Liverpool hat-trick against United since Peter Beardsley's in September 1990.

It was not only Kuyt’s goals that made his performance so very special, it was also his tireless running and hard work. He was also modest of his achievement and thanked his team-mates for helping him to three goals.

"It's perfect," Kuyt told Sky Sports after the game. "You dream about the hat-trick and to do it against United is the best feeling ever.

"I'm more than happy but I have to thank Luis [Suarez] because he played great and created two of the goals. They were quite easy goals, I used to score them in Holland when I played more like a striker. They count and I'm more than happy to take them." 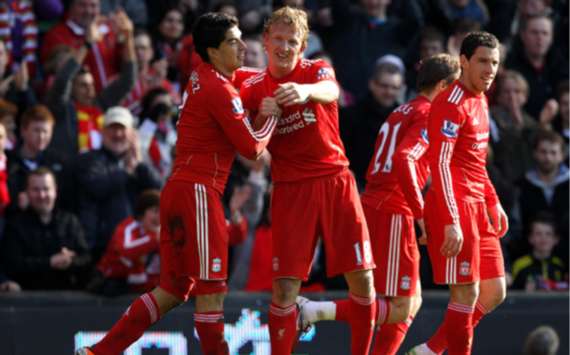 Karim Benzema appears to have rediscovered his confidence and was in very good form this week. On Thursday evening, the French international striker opened the scoring for los Blancos against Malaga in the Primera Division clash with Malaga at the Bernabeu and added a second in the second-half in their 7-0 triumph. On Sunday evening Benzema scored yet another brace, this time against Racing Santander away in their 3-1 victory; his second was a well-taken strike.

Sergio Aguero and Diego Forlan both were on target against Villarreal in their 3-1 victory at the Calderon in the Spanish Primera Division on Saturday evening, but it was Jose Antonio Reyes who sent them on their way.

The Spanish winger broke the deadlock after just five minutes and also provided the assist for Forlan’s goal besides being a handful for the Yellow Submarine throughout. Atletico’s hopes of a top-six finish have now been resuscitated.

Gennaro Gattuso has earned publicity for the wrong reasons after Milan’s defeat to Tottenham Hotspur in the Champions League last month, but the veteran Italian midfielder turned hero for the Rossoneri on Saturday evening.

The 33-year-old scored his first goal in three years against Juventus in Turin in the 68th minute to win the game for Milan. It wasn’t exactly a goal of craft and guile as Bianconeri goalkeeper Gianluigi Buffon should have saved his shot, but Gattuso’s performance at the Stadio Olimpico made him the only stand-out in a match that didn’t really live up to expectations.

Against Napoli at the San Siro last Monday night Gattuso also enjoyed a good outing as he worked hard in the midfield, made the tackles and helped Milan to a 3-0 victory.

Cesena have been flirting with relegation for most of the season but the Seahorses’ chances of survival in the Italian top flight received a massive boost on Sunday afternoon after their 3-2 victory over Sampdoria in Genoa.

Emanuele Giaccherini scored twice in the space of three minutes at the start of the second session to see that Cesena move out of the bottom three in Serie A. His first goal came from a well-taken volley that went in off the far post from a tight angle, and his second came just minutes later when he dispossessed Daniele Gastaldello and scored from just inside the Samp penalty box.

Hannover destroyed Bayern Munich 3-1 in their German Bundesliga encounter on Saturday afternoon to enhance their chances of Champions League qualification for next season, and the architect of the triumph was a certain Konstantin Rausch. He is a having a marvellous season and continued his good run of form against the defending German champions, as he set up the first goal with an exquisite cross and was involved in the third.

Koeln lost to Borussia Dortmund in the German Bundesliga on Friday evening but Michael Rensing was one player who didn’t deserve to be on the losing side. The former Bayern Munich goalkeeper made five brilliant saves that restricted the league leaders to a 1-0 victory. Neven Subotic, Felipe Santana, Kevin Grosskreutz and Robert Lewandowski were all denied in a brilliant display.

Luis Suarez was the constructor of Liverpool’s 3-1 victory over Manchester United at Anfield in the Premier League on Sunday afternoon. The Uruguay international forward played key roles in the three goals that Dirk Kuyt scored and established himself as the new darling of Anfield. The 24-year-old could just be the player to take Liverpool into a new and more prosperous era.

Lorenzo Ebecilio scored his first competitive goal on Sunday as Ajax won 4-0 against AZ in the Dutch Eredivisie. The left-winger suffered a heart attack when he was just 13 years of age while at AZ, causing the Dutch side to release him due to health concerns. However, Ajax took him in, with the 19-year-old now playing with a defibrillator. He repayed their faith by netting against his former club.

Emad Al-Hosani was the hero for Al-Alhi as he helped his side to a 1-1 draw with arch-rivals and current league leaders Al-Hilal in the Zain Saudi Professional League at Prince Abdullah Al-Faisal Stadium on Sunday. The Oman international striker gave his side the lead on 54 minutes and also had a goal disallowed.

Leave your notes of congratulations for Dirk Kuyt below, or discuss who else deserves a place in the sun this week...