Big-game flop? Bottles against the big teams? Unreliable? Try something else for a change. Try hero, for an instance.

On Sunday evening Zlatan Ibrahimovic was the difference between Inter and Milan at San Siro. It was the occasion of the Derby della Madonnina, the biggest game in Europe at the weekend, and Ibra turned on the style.

The Sweden international, who had led the Nerazzurri to three successive Scudetti between 2007 and 2009, earned a penalty in the fifth minute when he marched into the Inter penalty area and was brought down by centre-back Marco Materazzi.

Ibrahimovic stepped up to take the spot-kick in front of the Inter fans and fired the ball home past Luca Castellazzi. He also came close to adding a second on one other occasion but, more importantly, held the ball superbly up front to frustrat the Inter defenders.

The 29-year-old was the best player on the pitch on Sunday night and has been one of the best for Milan since joining them this summer. On Wednesday evening too, the former Juventus and Barcelona striker was on target for the Rossoneri in their 3-1 victory over Palermo in Milan.

Ibrahimovic has the reputation of being a big-game bottler but, as he showed against Inter, it is not as simple as that to define one of the most gifted and enigmatic footballers of this century. 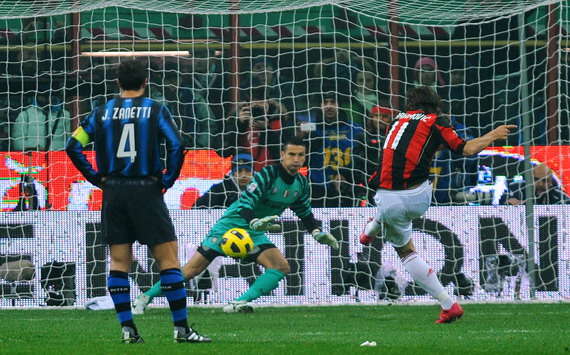 The Argentina international playmaker wasn’t supposed to start in the Sicilian derby against Catania but he did and Palermo won. Pastore scored all three goals in the Rosanero’s 3-1 triumph and gave his side hope of a top four finish in Serie A this season.

The ‘Zarate Kid’ is back in town as he inspired the Aquile to a 2-0 victory over Napoli at the Stadio Olimpico in Serie A on Sunday afternoon. Zarate scored the opening goal for Lazio, provided the assist for Sergio Floccari’s strike and also hit the frame of the Napoli goal. The Argentine had a perfect game.

The 23-year-old was the hero in the Rhein derby as he scored twice and provided the assist for another goal in Moenchengladbach’s 4-0 victory over Koeln. Bobadilla’s heroics mean that Gladbach are now off the bottom and in 17th place, a place and two points above Koeln.

The Ghana international was Sunderland’s best player at Stamford Bridge on Sunday afternoon as the Black Cats registered a memorable 3-0 victory against Chelsea in the Premier League. He scored the decisive second goal just minutes after the half-time interval and ran Paulo Ferreira and Branislav Ivanovic ragged all afternoon.

The 31-year-old scored the opening goal against Zob Ahan in the final of the Asian Champions League that the Korean side eventually won 3-1. Defensively Ognenovski struggled on one occasion but he distributed the ball well and imposed himself on the game.

Leave your notes of congratulations for Zlatan Ibrahimovic below, or discuss who else deserves a place in the sun this week...