By Peter Staunton
Goal.com's Peter Staunton analyses the exit of Brazil from World Cup 2010...
In our World Cup Comment series, individual writers at Goal.com offer their views on the hot World Cup topics of the day with local expertise and a global outlook...

Dunga had been just managing to keep the wolves from the door. The brand of football he imposed on the Brazil national team never pleased the aesthetes. And yet the criticism he encountered remained only dissonant conjecture. So long as the team were winning, as they were for the most part, there was not enough ammunition for Dunga's detractors to shoot him down. The results kept coming, even as he shed fan pleasers like Ronaldinho, Diego, Alexandre Pato and company.

The nature of the beast, however, was that he was only ever one aberration from disaster. One poor performance could be tolerated, barely, if the result was right. A poor performance and a loss? Sorry Dunga. That was not part of the deal. 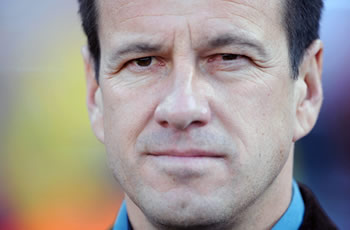 His own man| Dunga

The knives are again out on the part of ex-Selecao representatives, fans and the media. Dunga has never curried favour with the press; the vitriol and poison on the sports pages back home is about to increase. The loss to the Dutch in the last eight comes only one World Cup after an exit at the same stage. However the 2006 edition of the Canarinhas were permitted to visit nightclubs, spoke affably with the press and held public training sessions de rigeur. Dunga was roundly chided for closing ranks around the team but he did not waver. He wished only to be judged on the team's results, not their likeability or style.

Brazil sacrificed their carefree joga bonito under Dunga for one reason; a sixth World Cup. Alas, it has not come. Dunga has been hoist with his own petard. The very same 4-2-3-1, which had served him so well up to now failed. Moreover, the players he selected, stood by and defended failed him too.

Felipe Melo undertook what could have been a one-man sabotage act, with an own goal and a needless, avoidable dismissal. Michel Bastos lost his head and did very little other than foul Arjen Robben. He was hooked to avoid further recriminations. Dani Alves was selected on the right of midfield but went in search of the ball in other areas once parity was restored, leaving Maicon unable to cope with the runs of both Wesley Sneijder and Dirk Kuyt. Juan had been the best defender in the tournament and played like Roque Junior. The goalkeeper, Julio Cesar, picked up where he left off at Inter and made one fatal error.

And the strange thing about it is this; Brazil were by far the best team for more than 45 minutes. They deserved to be more than one goal up at half-time. Robinho and Kaka were linking up well, Felipe Melo and Gilberto Silva were functioning effectively, Maicon was forcing Kuyt to go where he did not want to go. 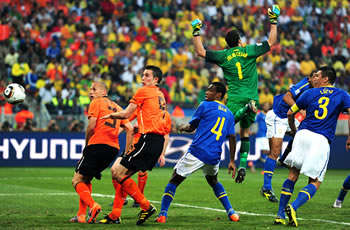 Turning point| Brazil were in pieces after the equaliser


Until they conceded an equaliser, that is. Brazil's defence was breached twice before this in the competition but that was when the games against North Korea and Cote d'Ivoire were as good as over. Here, they were rattled.

The South Americans surrendered control of the ball to Mark van Bommel and Nigel De Jong, who were excellent in the second half, and the Brazilians took the bait of Arjen Robben, who drew fouls. The team became ragged and undisciplined. Kaka and Luis Fabiano could not gain a foothold in the game. And Dunga could not change the match with a different type of player from the bench. Nilmar was introduced, to little avail, and the only other realistic alternatives were the inexperienced Grafite and Roma's Julio Baptista. The coach could only watch as the game slipped frustratingly through his fingers.

And so Brazil's World Cup narrative ends here with Dunga's experiment in tatters. He went his own way about restoring Brazil to glory and it seemed to be paying off; disciplined, a threat from set-pieces; coherent structure to the team. It is a personal tragedy for the former World Cup winning captain but, although they are now out, some Brazilians will herald this day as a victory for their ideology.