By Robin Bairner
The Oranje have booked a date with Brazil or Chile in the last eight after defeating the Repre...
Netherlands 2-1 Slovakia - Lineups/Stats
World Cup Fixtures & Results


Click here to vote for your Turkish Airlines Top Player of the Match!
Slovakia’s fine run to the knockout stages of the World Cup was abruptly ended by the Netherlands, who once again didn’t seem to hit their top gear en route to a 2-1 victory.

The Dutch always seemed to hold this match in their hands, particularly after grabbing the initiative thanks to a trademark strike from Arjen Robben. Bert van Marwijk’s Oranje maintained their steady if unspectacular level for much of the remainder of the match, though the Repre enjoyed some threatening moments in the second half. In the dying stages of the match, Wesley Sneijder pounced on a glaring goalkeeping error to put the Dutch into the quarter-finals, though a late Robert Vittek penalty would take some of the shine from the result.

Long range shots from either side were very much the order of the day in the opening few minutes. Slovakia made their presence felt with strong efforts from Vladimir Weiss and Marek Hamsik but it was the Netherlands who ultimately took a hold on the match, despite the initial exchanges being finely balanced.

Wesley Sneijder was heavily involved for the Dutch, as his been his custom in the competition to date. His first contribution was a shot from distance that went over the top, and that was matched by Dirk Kuyt soon afterwards, though the Liverpool man dragged his ambitious strike from range wide.

There could be little doubt that the Oranje were beginning to get into their stride, even if some of their passing was a little sloppy at times. Better opportunities started to be created by Bert van Marwijk’s side, but Robin van Persie wasted a good headed chance from just outside the six yard box and Sneijder finished tamely after being rolled in by the Arsenal forward.

It was Robben, making his first start of the World Cup after injury, who broke the deadlock. Sneijder was the architect, launching a fine long pass for the Bayern Munich winger to scamper onto down the left. As he has done so many times this season, the Dutchman gathered possession 30 yards from goal, advanced to the corner of the box, cut inside and slid a low left-footed shot into the corner of the net.

Prior to the break the Netherlands seemed to ease their effort somewhat, simply content to keep their opponents at an arm’s length. Van Persie tried to inject some life into the Dutch attack after the Oranje had withstood several Slovakian set-plays but the striker’s somewhat mundane right-footed shot from 25 yards was comfortably fielded by Jan Mucha.

A couple of minutes before the half-time interval, Van Persie slid a firm shot by the near post after good work by Mark van Bommel getting down the right. 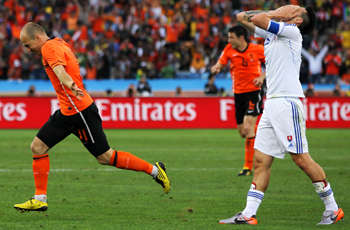 Having drifted in and out of the game in the first half, it was Robben who tried to make a significant early impact in the second. The Bayern Munich forward again jinked inside onto his left foot at the edge of the box but this time his low drive was superbly blocked by Mucha down to his right.

Moments later the goalkeeper produced an arguably better block. After the corner kick resulting from Robben’s shot had broken down, the 26-year-old broke into the left side of the box before delivering an intelligent centre that was turned goalwards by Joris Mathijsen. The big defender connected with the ball well, but Mucha spread himself well to block with his face.

On the rare occasions the Slovakians pushed forward meaningfully, the Dutch tended to counter their attacks forcefully. A swift break down the right was led by Robben, who picked out Sneijder on the opposite side of the pitch, though the Inter man’s shot was blocked by a retreating defender.

Midway through the second period, Maarten Stekelenburg in the Netherlands goal was suddenly employed after being a spectator for much of the previous 65 minutes. Miroslav Stoch had a fierce strike from the edge of the box brilliantly turned over the top by the Ajax goalkeeper. Robert Vittek seemingly had the freedom of the box seconds later, but after breaking the offside trap he was thwarted by the custodian.

Stirred into action, the Oranje began to push their way forward once again, with Kuyt having a long range effort parried by the post with little over quarter of an hour remaining.

Slovakia certainly did allow their levels to drop, though Vittek was again found wanting in front of goal when he pivoted to shoot over from the edge of the box after a fortunate ricochet fell at his feet.

The Netherlands had rarely looked like adding to their tally, but when Mucha badly misjudged a quickly taken free kick from Giovanni van Bronckhorst, Kuyt was able to take his time and calmly pick out Sneijder on the penalty spot. With a whole goal to aim at, the Inter player didn’t waste his chance.

Play was spread in the remaining seconds, and Slovakia pulled a goal back with the very last kick - Vittek converting a penalty kick deep into stoppage time.

There can be few doubts the classier side progressed, but it is a source of debate whether it’s good for the Dutch to have progress to the quarter-finals without hitting their best level. Meanwhile, Slovakia can return home with their heads high after a World Cup debut to remember.