By Robin Bairner
The Elephants didn't get the goals they needed against the Chollima to give them a fighting chance of progression...
North Korea 0-3 Cote d'Ivoire - Lineups/Stats
World Cup Fixtures/Results


Cote d’Ivoire have been eliminated from the World Cup as they failed to achieve the eight-goal swing against North Korea that would have put Portugal under threat, winning only 3-0.

The first half was entirely monopolised by the Elephants, but despite creating a steady stream of chances, they would only strike twice, with goals from Yaya Toure and Koffi Romaric. Such profligacy would be regretted after the break, as the Africans weren’t nearly so sharp and would only add to their tally late on from substitute Salomon Kalou.

Needing an avalanche of goals to stand any chance of going through, Cote d’Ivoire threatened on at least four occasions in the opening ten minutes. Less than 60 seconds were on the clock when Kader Keita raced onto a fine through pass from Yaya Toure but saw his shot blocked by Ri Myong-Guk.

The whirlwind start became a veritable tempest around the ten minute mark. A Koffi Romaric free kick was uncomfortably held by the Chollima goalkeeper before Gervinho rolled a square ball right along the goal line. Didier Drogba thumped a header into the net after 11 minutes but had his effort correctly disallowed for a marginal offside moments before Gervinho shot into the arms of Ri Myong-Guk.

A breakthrough was coming, and it arrived on 12 minutes when Yaya Toure cleverly planted a placed shot from the outside of the box into the corner of the net.

The deluge of shots continued. Romaric’s shot-cum-cross moments later hit the post and the Sevilla midfielder was on hand to make it 2-0 with less than 20 minutes played. Drogba showed exemplary control to pull down a difficult cross, turning away from his marker in one fluid movement. The Chelsea forward unleashed a thunderbolt that cannoned off the underside of the bar and bounced kindly back for Romaric to head home.

Hong Yong-Jo nearly pulled a goal back with a free kick that wrong-footed Boubacar Barry, but to the Ivorian goalkeeper’s relief, the effort dropped wide of his goal.

Just for a short period the Ivoirians were resisted, but there was always an underlying threat from the Africans, who were maintaining possession easily. Keita sent a fierce reminder of the Elephants’ threat by sending a stunning volley just by the top corner of the net and eight minutes before the interval a Gervinho toe-poke skimmed the far post when the Lille player should really have scored from a very good position.

Kolo Toure and Gervinho would complete the half with good efforts, though neither was a massive threat to their Asian opponents. 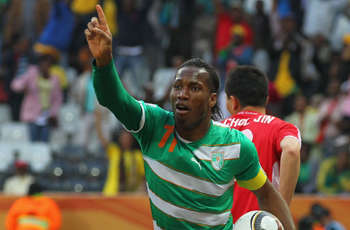 There was no relenting in the Elephants’ pressure after the break, initially at least. In the first five minutes after the restart the Ivoirians again crawled all over the North Korean defence but despite creating a couple of good situations could not find a third goal that would have given the team some real momentum.

Drogba had the best chance in the early moments of the second half, but his diving header to connect with a loose ball in the box missed the top corner from six yards.

Increasingly the Ivoirians’ play became fraught, and as a result the chances dried up. North Korea coincidentally increased in confidence and became a threat on the break, with Jong Tae-Se shooting on sight.

World Cup progression was growing an increasingly distant prospect for Cote d’Ivoire, and that was reflected in their attacks. Romaric had a powerful drive from distance well pushed away and substitute Kalou shot straight at Ri Myong-Guk, but the realisation of elimination was dawning on the green and white clad side.

Kalou had another wonderful chance 18 minutes from time, but he shot well over the top from close range after finding space in the box.

An afternoon that had promised much at one stage was petering out in a disappointing fashion for the Africans. Their attacks were by now limp and their decision-making poor.

At the other end of the field, great play from Pak Nam-Chol released Jong Tae-Se in the box. The North Korean could only prod at Boubacar Barry and the rebound wouldn’t fall kindly for the striker.

Ivory Coast were swiftly breaking to add a third goal. Boka broke impressively down the left side and delivered a delicious early centre that was turned home by Kalou.

Aruna Dindane thought he had added a fourth on 85 minutes, but his scrambled finish after a Drogba free kick was disallowed due to offside as the African side continued to push forward relentlessly to the death.

In the event, Portugal’s tie against Brazil would have eliminated Cote d’Ivoire no matter their tally, perhaps softening the blow of all the first half opportunities that were squandered in a game that really could have been a rout.