Click here to vote for your Turkish Airlines Top Player of the Match!
World champions Italy suffered an embarrassing exit at the first hurdle thanks to Slovakia's pulsating 3-2 World Cup Group F victory at Ellis Park.

Robert Vittek struck either side of the break before Antonio Di Natale's goal gave Italy hope. Kamil Kopunek made the game safe for Slovakia in the 89th minute before a further consolation from Fabio Quagliarella.


The 2006 winners knew that a win would definitely see them to progress to the next round, while a draw may have been enough as well. Slovakia needed nothing less than a win, and would need to do so by a couple of goals if New Zealand beat Paraguay.

Italy made two changes as expected, bringing in Gennaro Gattuso and Di Natale for Claudio Marchisio and Alberto Gilardino. Slovakia made twice as many changes, with Radoslav Zabavnik, Juraj Kucka, Miroslav Stoch and Erik Jendrisek replacing Kornel Salata, Jan Kozak, Stanislav Sestak and Vladimir Weiss after the defeat to Paraguay.

One of the new starters, Di Natale, was clearly looking to make an immediate impact as he attempted a speculative lob from distance inside the first 20 seconds, but it failed to trouble Jan Mucha in the Slovakia goal.

There was a glorious opportunity for Marek Hamsik to give Slovakia the lead in the sixth minute when Robert Vittek flicked the ball backwards into the Napoli star’s path, but he scuffed his left foot volleyed attempt wide of Federico Marchetti’s goal from 12 yards.

It was a rather nervy start to the game, with stakes extremely high for both countries. There was little in the way of creative midfield play in the opening exchanges, as the two sides looked to hassle and harry each other into a crucial early mistake. 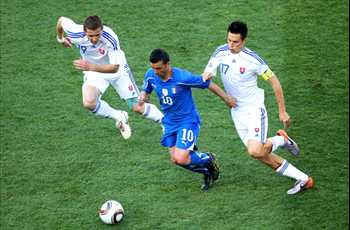 The first yellow card was always going to be chalked up reasonably early, and Zdeno Strba was the recipient for a foul on the spinning Gattuso. Moments later Simone Pepe attempted to catch out Mucha from distance, ignoring the back post run of Di Natale in the process, but the 'keeper managed to get down and smother the ball.

As Italy were beginning to get into their stride, Slovakia continued to cause problems with long passes into the channels, with Jendrisek causing Giorgio Chiellini to concede a corner. But when the set piece was delivered from the right, it just cleared Hamsik at the back post.

Martin Skrtel then made a magnificent run through the middle of the Azzurri engine room, before eventually being denied by Gattuso inside the Italy box when he’d just been unable to tee himself up on his left foot.

But Slovakia’s period of pressure came to fruition on 25 minutes when Daniele De Rossi gave away possession too easily in midfield and the ball was quickly fed to Robert Vittek, who slid a perfect right foot shot low to Marchetti’s right to give the eastern Europeans a surprise lead.

The tension in the world champions’ camp was suddenly right on the surface, with several quick concessions of the ball allowing Slovakia to settle over the next few minutes after the delirium of taking the lead. Fabio Cannavaro was cautioned by referee Howard Webb as Italy continued to find only frustration under the now pressing circumstances they found themselves in.

It could so easily have been 2-0 on 35 minutes when Strba unleashed a thunderbolt from over 30 yards which Marchetti had to tip two-handed around the post. After the corner had come to nothing, Italy broke well, but Vincenzo Iaquinta just failed to get on the end of a promising throughball and it was allowed to run harmlessly out of play.

Iaquinta did then connect with a header which could have brought the Azzurri level, but it was deflected just over the bar and the resulting corner was easily dealt with.

Strba received a nasty looking deep gash on the shin when he and Gattuso had a coming together late in the half. Coach Vladimir Weiss was ready to bring on Kamil Kopunek in his place until he was strapped up and courageously made the decision to continue.

There was almost further trouble for Italy when Kucka struck a superb volley just wide of Marchetti’s near post, but Italy held on to a single-goal deficit at the break.

Not for the first time in this tournament, Marcello Lippi needed to make half-time changes in a bid to get his side back into the game. On came Christian Maggio and Fabio Quagliarella for Gattuso and the lively Domenico Criscito.

Despite their poor first half showing, Italy were still only one goal from potential qualification for the last 16, and Pepe’s cross gave Iaquinta half a chance to put them back in second spot, but he could only graze a glancing header wide. 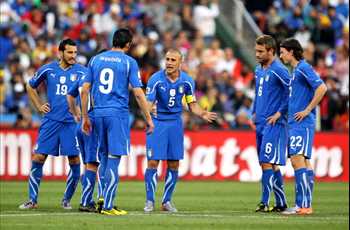 The struggles were continuing in the early stages of the second half, with Slovakia looking more than comfortable until Maggio played a neat ball through to Di Natale, but his scuffed shot on the turn went aimlessly wide.

This prompted a final change for the champions, with the fit-again Andrea Pirlo replacing the ineffective Riccardo Montolivo.

The Slovaks continued to look dangerous on the break, with Italy appearing weak at the back whenever attacked and Kucka and Vittek both had half-chances to double the advantage.

At the other end, a weak shot from 20 yards by Di Natale after Gianluca Zambrotta had done well down the left was about the best the Nazionale could offer.

Slovakia broke again on 65 minutes when Miroslav Stoch latched on to a superb throughball, but Maggio chased back well to cut out the danger and Stoch was penalised for a foul.

Immediately Italy should have been level. Pepe and Pirlo made smart work down the right, and when the ball escaped Mucha, Quagliarella fire in a right foot shot which was superbly blocked by the retreating Skrtel right on the goal line.

Once more Slovakia proved a threat on the break though after that lucky escape, and Stoch cut inside Maggio to send in a shot from 20 yards, but it was always swinging wide of Marchetti’s goal. Giorgio Chiellini then had to be alert to cover the onrushing Hamsik. And after Cannavaro had averted the danger from the first corner, Slovakia struck again.

The second corner was half cleared, but when Hamsik delivered low from the right nobody in blue reacted as quickly as Robert Vittek, who calmly slotted home his second at the near post with Chiellini left in his wake and Marchetti slow to cover his near post.

With just 17 minutes remaining, it was game over for Italy. The players’ faces told the story as they came to terms with an Azzurri exit at the first hurdle for the first time in 36 years.

Slovakia’s supporters were in a buoyant mood by now, and their side continued to cause Italy problems. However, the Azzurri hit back with just nine minutes remaining.

An excellent one-two involving Quagliarella and Iaquinta saw Mucha parry the Napoli man’s shot straight into the path of Antonio Di Natale, who had the easiest of tasks to side-foot home.

The lifeline sparked a momentary melee in the back of the Slovakia net, with Mucha twice striking Quagliarella in the face, though the Italy forward did rather theatrically fall to the floor.

When play eventually restarted there was finally some real urgency in Italy’s play. Di Natale had a shot from 20 yards blocked, before he collected Pepe’s cross to tee up Quagliarella to slot home from 10 yards, but the referee’s assistant’s flag was up. Replays suggested the call was incorrect.

Slovakia then made the game safe after more sloppy defending in the 89th minute. De Rossi failed to track the onrushing Kamil Kopunek from a simple throw-in and the substitute had the easiest of tasks in chipping the advancing Marchetti to confirm Italy’s misery.

The Azzurri struck back again though in the first minute of stoppage time, Fabio Quagliarella firing home from 25 yards out of nothing.

But it wasn’t to be enough as the champions were eliminated, Pepe missing a late chance to save his side.