By Robin Bairner
Here’s how Goal.com rated all the actors in the Stars and Stripes’ dramatic victory over the Fennecs...
USA

Howard – 7 - Never pushed to his very limit by the Algerian attack, but made plenty of blocks from relatively routine chances.

Cherundolo – 7 - Pushed forward readily to provide width to his side and threw over a number of good crosses. One poor error allowed Djebbour in but was generally solid.

DeMerit – 6.5 - Missed a couple of important headers, including one that allowed Djebbour through to shoot off the bar. Aside from such lapses, he enjoyed a solid game but he was lucky not to cost his side.

Bocanegra – 7.5 - Shifted into the centre of the rearguard, the Stade Rennais player enjoyed a solid first half. Troubled at times by the direct running of the Fenneces, but he was largely resolute, clearing a number of crosses very competently.

Bornstein – 6.5 - Snuffed out the threat of Yebda early in the game, when he got back impressively to make a fine recovery challenge on the midfielder. Reticent to really push forward, leaving the responsibility to Cherundolo.

Donovan – 7.5 - Only came into the game in fits and bursts, but once again when he was involved the USA looked very dangerous. One terrific pass in the first half so nearly released Michael Bradley for an opening goal, and how Altidore missed from Donovan’s chip prior to the break no-one knows. At the end, Donovan was the main man, scoring the decisive goal.

Bradley – 7.5 - After growing into the England match, the central midfielder was forced to do likewise in this encounter. Timed his offensive runs forward superbly, showing great strength and directness when pushing on.

Edu – 6 - Sloppy in possession, the Rangers midfielder would have wanted to have created a better impression. When the USA really needed some velvet passing, he was only abrasive, giving too much away when he pushed on. Little surprise he was replaced.

Dempsey – 6.5 – Had a goal disallowed wrongly for offside in the first half but wasn’t the creative influence out on the flank that he might have liked to have been. Hit the post in the second half when well placed and hit the follow-up wide.

Gomez – 5 - Not an impressive performance from the striker. Missed an array of good chances, including a one-on-one opportunity in the first period, and gave the ball away too frequently. Withdrawn at half-time.

Altidore – 5.5 - Guilty of one of the misses of the tournament, shooting high over the bar with the goal gaping from just six yards out. Some of his decision making in the second half was questionable but showed a good turn of pace and was certainly a threat.

Feilhaber – 7 - Introduced into the action during the half-time interval, he helped provide more forward impetus in the side’s play.

Buddle – 5.5 - Seemed to lack the brain to play at this level, but showed decent raw ability for 25 minutes.

Beasley – n/a - Only came on towards the end of the match. 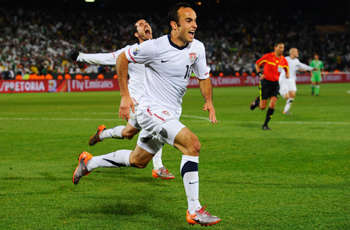 M’Bolhi – 8.5 - After stepping into goal for the England game, the custodian again looked sound for the Fennecs. Produced a string of blocks and the worst he could be accused of was being caught slightly out of position at times. Seemed to have earned the clean sheet he so deserved before Donovan’s late intervention.

Bougherra – 7.5 - Made a terrific covering challenge on Bradley when the midfielder seemed destined to score in the first half, really maintaining his side’s World Cup challenge for a little longer. Another impressive performance at the back.

Halliche – 6.5 - Decent performance in the back line from the big defender, who largely did well to cope with the Americans’ somewhat erratic attacking threat.

Yahia – 6 - Steady in the centre of the Algerian defence, he was caught making a big error to give possession to Donovan in a very healthy position inside the box during the first half. This was not characteristic of his match, though he lost his discipline to be dismissed at the end.

Kadir – 7 - Acting as the right wing-back, the Valenciennes player was active and nippy down the flank, doing a good job on squeezing Depmsey’s influence out of the game. Didn’t get forward so much after the interval.

Yebda – 6.5 - When Yebda was active as an attacking threat, he looked very impressive indeed running from deep. One great early burst carried him 40 yards down the right flank, but such moments were fleeting. A booking in the first half affected his ability to make tackles for the remainder of the game and his shooting was wayward.

Lacen – 6.5 - Executed a stunning recovery challenge on the marauding Bradley near the edge of the box to temporarily snuff out a dangerous attack. Might have been more active in making challenges as the USA controlled the middle of the pitch for much of the game.

Belhadj – 7.5 - Offered a great deal down the left flank for Algeria. Strong running forward and equally useful in a defensive capacity, the former Olympique Lyonnais player was one of les Fennecs’ stand-outs.

Matmour – 7 - Set the tone for his performance with a thumping volley just over the top in the opening seconds of the game. His performance was marked with powerful, positive forward running and a willingness to shoot on sight. Faded after the break, however.

Djebbour – 7 - A really positive influence for long periods of the game leading the Algeria charge. Showed a good ability to hold the ball up and bring others into play, but he was also a powerful runner when in possession and was not afraid to shoot.

Ziani – 7 - Undoubtedly the most creative of the Algerian players, it came as something of a surprise when he was substituted. After he left the pitch midway through the second half, les Fennecs were not nearly so clever going forward, relying instead on their physical attributes.

Ghezzal – 6 – Sent-off in the opening game of Algeria’s tournament, he managed to at least last the duration after being brought on with half an hour to play.

Guedioura – 6 – Replaced Ziani in body, but didn’t have his influence.