By Stefan Coerts
The Albiceleste struggled to break through the defence of the Europeans, but two second-half goals helped them to victory...
Greece 0-2 Argentina - Lineups/Stats
World Cup Fixtures and Results

Greece have been eliminated in the group stages of the World Cup after a 2-0 loss to Argentina. The Albiceleste win the group and progress to the second round, while the Europeans finish third and will head home.

Otto Rehhagel's men were dominated for the majority of the match and tried to hit Argentina on the counterattack. The Albiceleste proved to be too strong though and eventually cruised to a comfortable win.

Argentina started the match the better side, but the Greeks were responsible for the first dangerous situation of the game. Georgios Samaras beat Martin Demichelis to a long ball and looked favoured to dribble past his marker. However, the Bayern Munich defender recovered to slide tackle the ball away before Samaras could get a shot in.

Sergio Aguero then almost opened the scoring for the South Americans after 18 minutes of play. The Atletico Madrid man exploded past the Greek defence after a pass from Juan Sebastian Veron before unleashing a great shot that forced a save from the goalkeeper.

The following corner than led to a chance for Veron to demonstrate his shooting skills and the veteran midfielder almost found the net with a superb long range strike. Nevertheless, Alexandros Tzorvas pulled off an excellent save to tap the ball over the crossbar.

Greece midfielder Giorgios Karagounis then tried to reach Samaras with a great long pass, but the Celtic star failed to control the ball and the chance went begging. Minutes later, another long ball went to Samaras, but Demichelis made a fine challenge to thwart the danger. 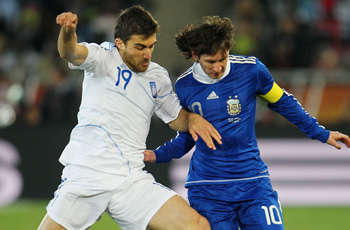 Aguero again caused the Greece defence all kinds of trouble at the half hour mark. Diego Milito crossed from the right byline, finding the Atleti man at the far post. An exceptional block by Loukas Vyntra denied the young forward though.

Romero was called into action minutes before the interval after a free-kick from Greece. Karagounis curled in his delivery from the right that looked dangerous, but the AZ 'keeper rushed off his line to collect the cross.

Maxi Rodriguez almost opened the scoring seconds before the half-time break when the Greek defence allowed him too much space inside the area. Tzorvas saved the winger's shot from close range though.

The loose ball was then picked up by the Argentinians again and Lionel Messi eventually won possession at the edge of the box. The Barcelona star tried his luck with a placed shot, but Tzorvas was once again on hand to deny the tricky forward.

Greece started the second half brilliantly and Samaras almost gave his side the lead minutes after the break. Demichelis had slipped, leaving Samaras with a one-on-one against Nicolas Burdisso. Samaras' initial shot was deflected, but he reached the ball first and fired from a tight angle, but missed wide of the far post.

With the Argentinian attack struggling to make an impact, Clemente Rodriguez opted to take matters into his own hands. The full-back cut inside from the left before unleashing a low shot that only just went wide. 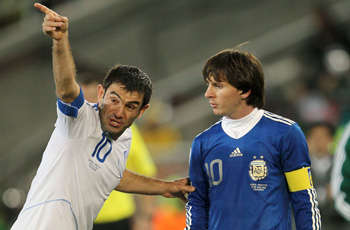 Again Samaras troubled the Argentinian defence at the hour mark. The Celtic striker decided to try his luck with an ambitious shot from 20 yards out, but his attempt sailed high and wide.

The referee had no choice but to award the Albiceleste a free kick after 69 minutes of play and Messi almost surprised Tzorvas with a great long range strike. However, the Greece goalie was alert and tapped the ball wide.

The following corner led to a huge chance for Argentina, as Bolatti smacked it with power from close range. Tzorvas somehow managed to catch it though.

Bayern Munich star Demichelis finally broke the deadlock in the 79th minute after a corner kick. His first attempt was blocked by team-mate Milito, but the error prone defender didn't waste any time to fire home the rebound from close range.

Messi then finally showed a flash of brilliance with five minutes to go. The Barcelona star went by two opponents before beating the Greek glovesman with a good shot, only to see his shot hit the upright.

Veteran striker Martin Palermo added his name to the score sheet in the dying seconds of the game. Tzorvas was able to save Messi's shot from twenty yards out, but Palermo was alert to slot home the rebound.