By Robin Bairner
Carlos Queiroz’s Seleccao have not had it all their own way against the Chollima, but they do have the lead...

Click here to vote for your Turkish Airlines Top Player of the Match!
There was to be no repeat of the scare Portugal suffered at the hands of North Korea in the 1966 World Cup on Monday lunchtime, as the Seleccao moved past the Asian nation 7-0.

For 45 minutes, the Chollima genuinely had their opponents worried, though they would fall behind to a fine Raul Meireles goal. When Simao struck a second, the floodgates quickly opened. Hugo Almeida and Tiago added goals as Portugal threatened with every attack. Liedson added the fifth with time running out, before Cristiano Ronaldo and Tiago also found the net.

Having drawn confidence from their opening  encounter against Brazil, North Korea played this encounter with a distinctly more optimistic flavour. The Asian side featured a more attacking setup, and that would allow them to be a very meaningful attacking threat in the first half.

Before the Koreans started to really exert serious pressure, they first had to withstand some worrying moments from the Portuguese. It took Cristiano Ronaldo only two minutes to fire a deflected shot at goal, before centre-back Ricardo Carvalho mustered a couple of very good efforts. The Chelsea man spun to shoot over from inside the box after an exciting break forward and then hammered a header against the post from a corner kick.

North Korea were certainly not content to defence, attacking with intent for long periods. Cha Jong-Hyok was especially impressive, powering a spectacular shot narrowly wide of goal from fully 30 yards out before Jong Tae-Se couldn’t control a clever through ball off a skiddy wet surface.

Hong Yong-Jo’s angled drive forced Eduardo into a diving block, and Portugal had a let-off when the ball dropped just too high for Pak Nam-Chol to direct into the net with his head.

The Seleccao, who were looking a little ragged at the back, were playing offensively only in bursts. After surviving a difficult period, Carlos Queiroz’s side enjoyed a few strikes from range before grabbing the opening goal somewhat against the run of play.

Tiago, who was drafted into the starting XI after Portugal’s flat showing against Cote d’Ivoire, conceived a wonderful through pass to central midfield colleague Raul Meireles, who flashed a first time drive into the net.

Ten minutes before the break, a Tiago cutback was inadequately dealt with by the Asians’ defence but Meireles couldn’t turn the ball into the net when it broke kindly to him.

Ronaldo struggled to get into the match but a strong shot from the edge of the area three minutes prior to the interval reminded the fans he was still on the field. 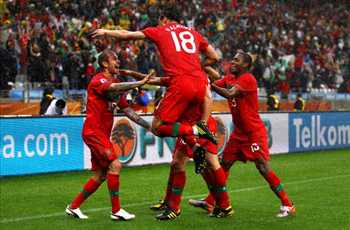 Portugal were quickly onto the front foot after the break. Tiago had a shot turned over the top by Ri Myong-Guk, who didn’t cover himself in glory moments later by nearly spilling a routing Ronaldo drive to the feet of Almeida.

At the other end, Jong Tae-Se had a low free kick easily saved by Eduardo.

It was the Seleccao who were making much of the running, and Coentrao nearly rolled in Almeida, though the striker was well covered and couldn’t direct the near post centre into the net.

Moments later, the Portuguese did have their second. Almeida and Meireles combined brilliantly on the edge of the box before a neat pass from the midfielder released Simao, who slipped a shot through the goalkeeper’s legs.

Now rampant, it was soon 3-0 in favour of the Europeans. Coentrao made another impressive surge down the left hand side of the park and picked out a wonderful cross for Almeida to head high into the net.

Before an hour was played, the Seleccao had added yet another. Again it was the left hand side of the park that Portugal exposed wonderfully. Ronaldo finally made a telling contribution to the game, breaking the offside trap down the channel before cutting a pass back to Tiago on the edge of the box. The midfielder side-footed home, though Ri Myong-Guk might have done more to repel the shot.

Another great Ronaldo cross picked out Meireles at the far post within a few minutes, but he blasted past the upright when well positioned ten yards from goal. Coentrao then dinked over after being released by the suddenly threatening Real Madrid star.

On 70 minutes, finally the world got to see a trademark Ronaldo run and shot, but his swerving, dipping strike from well out flew over the goalkeeper but cracked the top of the crossbar.

To the credit of the Chollima, they maintained an attacking stance, but this left them exposed at the back. After a flawless defensive performance against Brazil only a few days ago, their rearguard looked far shakier on this occasion, and when Ji Yun-Nam totally miss-kicked in his own box, substitute Liedson fired home with virtually his first touch.

A combination of poor play from Pak Chol-Jin and some luck resulted in Ronaldo getting a lucky break to round the custodian and side-foot into an empty net with a couple of minutes remaining, before Tiago’s late header completed a rout that reflected somewhat unfairly on the North Koreas.

Victory for Portugal ultimately came about easily, and such was the margin of their victory that it will take a monumental swing against the Seleccao on the final day of Group G action if they are to fail to make the last 16.