By Clark Whitney
After Valon Behrami was sent off in the first half, Mark Gonzalez netted to secure a vital three points for Chile.
Chile 1-0 Switzerland - Lineups/Stats
World Cup Fixtures/Results

Chile took a great stride towards winning Group H with a 1-0 victory over Switzerland, who had winger Valon Behrami sent off in the first half. Even if Spain manage to beat Honduras later today, Chile can claim first place in their group by avoiding defeat to La Furia Roja in their final group stage match.

Just as they did in their win over Honduras, Chile lined up in an aggressive 3-3-1-3 formation as they looked to qualify for the knockout rounds ahead of the final group stage showdown with Spain. Humberto Suazo earned his first start of the tournament in attack, and Gonzalo Jara slotted in on the left.

Fresh off their shocking 1-0 upset of Spain, Switzerland entered today's match with heads full of steam. Ottmar Hitzfeld welcomed back star striker Alexander Frei and right winger Valon Behrami, and although Philippe Senderos was unable to start due to injury. In place of the centre half, Steve von Bergen got the nod.

The match got off to a rather slow start, with the Chileans passing quite well, but lacking a quality option in the penalty area. The Swiss did well to win nearly equal possession as their South American opponents, but were much more focused on defensive duties than looking for a goal.

In the 10th minute, the Chilean attack began to show its teeth. Arturo Vidal first tested goalkeeper Diego Benaglio with a nasty, dipping effort from 20 yards, but was denied by a good punch save. The rebound fell to Carlos Carmona, who blasted a low drive that Benaglio again did well to parry. Shortly thereafter, Alexis Sanchez beat Reto Ziegler on the right flank and pulled back for Suazo, but the fit-again forward failed to properly connect. 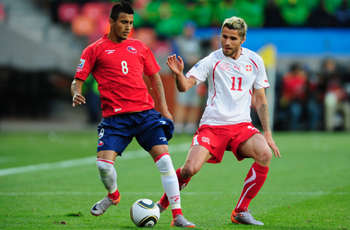 Swiss wingers Behrami and Gelson Fernandes were silenced for the majority of the first half, leaving Frei and Blaise Nkufo all alone up front. Despite their minimal commitment to attack, the Europeans were nearly gifted a goal when Mauricio Isla played a loose back pass to Claudio Bravo. The goalkeeper had to be quick off his line to reach the ball ahead of Nkufo, but managed to clear.

If there was any question of Hitzfeld's strategy, that was eliminated in the 30th minute, when Behrami was sent off under controversial circumstances. On the right flank, the winger attempted to free himself from Vidal, who was pulling his shirt. Behrami's arm was high as he flailed it backwards, and it connected with Vidal's neck. After a few moments of pondering, referee Khalil Al Ghamdi showed Behrami the red card, leaving the Swiss with a veritable mountain to climb.


After the red carding, Chile were emboldened, and used their numerical advantage by spreading the ball all over the pitch. Only last-ditch defending around the penalty area saved the Swiss. Perhaps the best opportunity of the half came for Chile as Sanchez took down Jean Beausejour's cross with exquisite skill, but fired directly into Benaglio's arms.

Towards the end of the half, Hitzfeld replaced Frei, who was playing out of position on the right flank, with natural winger Tranquillo Barnetta. The Bayer Leverkusen man added a bit more stability for the Swiss, but Chile remained threatening.

For all their passing quality and dominance in possession, the South Americans were not quite able to break through before the half, and had to settle for a scoreless draw at the interval.

After the half, Chile made a pair of substitutions: for Vidal and Suazo, Jorge Valdivia and Mark Gonzalez entered the fray. As they had in the first half, the Chileans took every chance to move forward.

It took just four minutes for the South Americans to put the ball into the net; following a free kick, Sanchez was picked out at the edge of the penalty area, and fired a low drive into the net. The ball took a deflection along the way, however, and the goal was waived off for offside.

Chile pressed and pressed, and Sanchez used his impressive touch to cause the Swiss trouble where Suazo previously did not. The Udinese man received the ball inside the penalty area on a number of occasions, but was denied by Von Bergen and Stephane Grichting. Despite having played very well throughout the match, the latter defender made a real howler in the 55th minute, allowing the ball to leave his feet and fall for Sanchez. The attacker dribbled towards goal, but Benaglio did well to block his shot.

The Swiss eventually recovered from the Chilean onslaught, and defended well. By the 68th minute, they surpassed Italy's record of minutes in the World Cup without conceding a goal.

That record would not extend much further, however. Following an exquisite through ball from Valdivia, substitute Esteban Paredes rounded Benaglio and crossed from the right byline. Mark Gonzalez was wide open at the far post, and headed home from close range to put Chile ahead with the first World Cup goal scored against Switzerland since 1994.

Entering the final quarter hour, Chile were well in position to take three points, having very little Swiss attack against which to defend. In the 84th minute, Paredes had a chance to put the match away after beating Lichsteiner on the wing. With just Benaglio to beat, the Colo Colo man fired over the bar.

With the Swiss throwing in the kitchen sink in attack, Paredes had another chance to end the match as a competition, but after putting the ball on his left foot, fired just wide of the right post.

Chile's wastefulness in attack nearly cost them dearly. In injury time, substitute Eren Derdiyok found the ball at his feet 13 yards from goal, but side-footed the ball wide.

Three minutes into added time, the referee blew his whistle for the final time, and Chile claimed a crucial three points, putting them in first place in their group, three points ahead of the Swiss, and six points ahead of both Spain and Honduras, who play later tonight.