By Adam Scime
The All Whites fought hard to hold the Azzurri in Nelspruit. Goal.com rates the participants...
ITALY

Marchetti- 6: Did not have a real save to make for the entire 90 minutes, as New Zealand concentrated on defending.

Zambrotta- 6: Got forward several times in the first-half, but there was no end product from the veteran full-back.

Cannavaro- 5.5: Failed to clear the ball on the first goal, even though there were suspicions of offside, and he paid dearly for his mistake. Afterwards, he dealt comfortably enough with what little the Oceanians did going forward.

Chiellini- 7: Solid and uncompromising at the back, he was never troubled by the attackers and won many physical battles with ease for his side.

Criscito- 5: Nervous most of the time, he was defensively solid enough. Had some nice link-up play with Di Natale, but like Zambrotta he failed to make any real contribution coming forward.

Pepe- 5.5: Not as effective as he was in their first match against Paraguay. He continued his hard work on the wing, but did not create as many openings as Lippi would have liked and was removed at half-time for Camoranesi.

De Rossi- 6.5: Played well sitting in front of the defence, but did not provide the leadership and power in attack that he has previously.  Nonetheless, he easily nullified the All Whites midfield. He also went down a bit easily on the penalty call.

Montolivo- 7: Italy's spark for long periods, Montolivo was unlucky not to find the back of the net today as he hit the post in the first-half and saw a long range strike brilliantly denied by the goalkeeper in the second. His passing was also spot on.

Marchisio- 4.5: Again played out of position, this time as a winger instead in support of the strikers, the Juventus midfielder failed to take advantage of any space afforded to him and did not link up well. Was substituted in the second-half.

Gilardino- 4: Denied much service, but he was once again completely anonymous and did not provide any real threat for the Azzurri.

Iaquinta- 6: Expert finish from the penalty spot and had a dangerous header in the second-half, but there was too little from the Juventus striker.

Di Natale- 6.5: Some nice movements in attack, at least he took the initiative and caused problems for the New Zealand defence. He had a volley saved and put in plenty of crosses for his team-mates.

Camoranesi- 5: A few bright moments, but looked a step too slow and failed to make the most of when he had the ball.

Pazzini- 4: Like Gilardino, you'd be hard pressed to even recall a contribution he made to the match. He was given a chance to impress today, but did not take it when thrown in to try and find a winner. 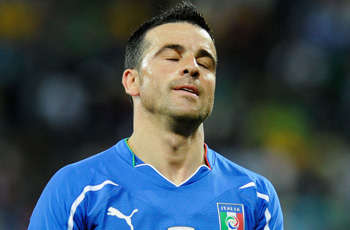 Paston- 8.5: Made pivotal stops to keep out long-range efforts from Montolivo, De Rossi and Camoranesi in the second-half. A performance worthy of a point, if not more.

Reid- 6.5: Looked a bit shaky early, but made some vital interceptions when the Azzurri were applying pressure in the late stages.

Nelsen- 8.5: The skipper led by an example. An absolute rock at the back, as he looked more like the great Italian defenders of the past than someone playing for a team that was written off at the start of this World Cup.

Smith- 6.5: Was punished for a slight tug on De Rossi's jersey as he gave away a penalty, but otherwise did his job when called upon against Iaquinta and Gilardino.

Bertos- 6: Pinned back in the first-half, he found a bit more space in the second to cause a couple of problems for Crisicto. Mostly a poor match though.

Elliott- 7: His excellent set-piece set up the All Whites' goal and he fought hard as well. got the ball forward whenever possible.

Vicelich- 5: Vicelich's only real contribution was a stunning shot from just outside the area that nearly found the top corner.

Lochhead- 5: The left-sided midfielder had to track back to keep the italians at bay, he struggled with the runs of Zambrotta initially, but settled to deal more gracefully with them as the match continued.

Killen- 4: Not much action from the striker, who was marshalled by the Azzurri back-line with ease.

Fallon- 5: Threw a few elbows early, earning a caution, and that seemed to tone down his performance before he was subbed off later on.

Smeltz- 7: Was in the right place at the right time to tuck away Elliot's freekick in the seventh minute and earn a point for New Zealand. Caused a few problems in the box on the rare occasions his team got forward.

Wood- 6.5: The teenaager almost created what would have been one of the most historic moments in World Cup history, as his shot flashed just wide of Marchetti's post late on.