By Stefan Coerts
Goal.com investigates the individual players during Oranje's 2-0 win against the Danes...
NETHERLANDS

Stekelenburg – 7 - The goalkeeper was rarely tested, but showed safe hands whenever called upon. Made a good save on Kahlenberg's shot before the break to keep a clean sheet.

Van der Wiel – 7 - Bombed up and down the right wing for the full 90 minutes. The Ajax star was hardly troubled in his defensive duties and was impressive going forward.

Mathijsen – 6.5 - Mathijsen put in quite a solid performance at the back. Troubled by Bendtner on occasions, but won the majority of his duels.

Heitinga – 6.5 – Heitinga formed a good defensive partnership with Mathijsen. Lost track of Bendtner for a moment halfway through the first half, but looked reliable throughout the game.

Van Bronckhorst – 6 - The experienced defender struggled at times against Rommedahl before the break. Recovered well in the second half, but didn't get involved too much going forward.

De Jong – 7 - The Manchester City man once again proved to be an important part of the Dutch team. Not afraid to put his feet in and made some good interceptions. Deservedly booked before the break after a harsh tackle.

Van Bommel - 6.5 - Van Bommel was unable to dominate play as he has done at Bayern Munich this season, but the holding midfielder still played a good game. Provided his back four with excellent cover whenever needed.

Kuyt – 6.5 – The Liverpool man was largely anonymous before the break and was lucky not to be withdrawn at half-time. Bounced back with a good display in the second half. Put Poulsen under pressure for the opener before tapping home a rebound in the dying minutes of the game.

Sneijder – 6 - Sneijder was nowhere near his best form and couldn't leave his mark on the game. Set pieces were below par and his passing was disappointing. Did play a big role in Holland's second goal.

Van der Vaart – 5.5 - The tricky midfielder was played out of position on the left wing and failed to live up to expectations. Was drawn to the centre of the pitch too often. Hooked for Elia after the break.

Van Persie – 6 - The in-form striker was tightly marked by Agger and Kjaer and wasn't the threat many expected him to be. Did send in the cross that eventually led to the opener.

Elia – 8 – Came on halfway through the second half and put in a man of the match performance in the 25 minutes he got. Elia made some brilliant individual moves and played a large role in his side's second goal. 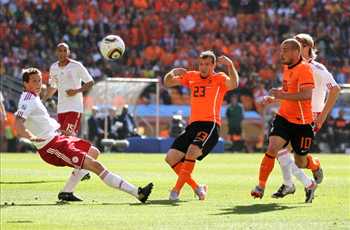 Sorensen – 6.5 – Showed shaky hands on a Kuyt shot early on, but proved to be a reliable goalie in the remainder of the game. Not at fault for either of the goals.

L. Jacobsen – 6.5 - The first mission of the full-back was to secure his flank, which he did impressively in the first half. Struggled after the entrance of Elia after the interval.

Kjaer – 7 - Tasked with the challenge of marking Van Persie, the Palermo star did his chore well. One lapse in concentration after the interval was nearly costly, but was otherwise strong. Picked up a second half booking for persistent fouling.

Agger – 7 – Agger was solid as a rock in his defensive duties and formed a formidable partnership with Kjaer. Tried his luck with a number of long range strikes, but couldn't trouble the Dutch goalie.

S. Poulsen – 5 - Nullified the threat of Kuyt before the break, but started the second half in disastrous fashion as he headed the ball past his own goalie. Poulsen was unable to shake off the thoughts of his own goal in the remainder of the game and looked vulnerable.

Kahlenberg – 6.5 - The Wolfsburg midfielder hasn't played much at club level this season, but was in good form on Monday. Kahlenberg made some good runs forward and almost scored with a left footed shot in the first half.

C. Poulsen – 6 - Poulsen largely kept Inter star Wesley Sneijder at bay in midfield, but didn't really get involved much in possession. Nothing special from the experienced Juventus midfielder.

Jorgensen – 5 – The former Fiorentina star was very much anonymous in Johannesburg. Lost the battle in midfield against De Jong and van Bommel and looks past his prime.

Rommedahl – 6.5 - The Ajax winger caused Van Bronckhorst all kinds of problems in the first half. However, like the rest of the team, Rommedahl faded toward the end of the match.

Bendtner – 6.5 - Bendtner was deemed fit enough to play only hours ahead of the first whistle. He posed his side's biggest threat with his physical presence. Should have scored in the first half, but aimed his header wide. Hooked at the hour mark.

Enevoldsen – 6.5 – The Groningen star was one of the surprise inclusions in Morten Olsen's line-up and fully justified his starting berth. Made some dangerous runs before being substituted in favour of the more attacking Gronkjaer.

Gronkjaer – 6 – Made a lively start after entering the pitch, but was unable to make an impact later on.

Beckmann - 5 - Looked very much out of his depth after coming off the bench to replace Bendtner.