By Carlo Garganese
It wouldn't be a World Cup, without some hilarious Pele forecasts. Goal.com reprints an old favourite...
PLEASE NOTE THIS WAS ORIGINALLY PUBLISHED SEVERAL MONTHS AGO


Pele may have been one of the greatest players in the history of the game, having been part of three victorious World Cup teams in 1958, 1962 and 1970, but, since retiring, he has become less respected as a pundit off-the-pitch.

The Brazilian is infamous for his numerous wrong predictions over the years. Romario once declared that "Pele is a poet when he keeps his mouth shut", while coach Luiz Felipe Scolari delivered the legendary line, "I believe Pele knows nothing about football. His analysis always turns out to be wrong. If you want to win a title, you have to listen to Pele and then do the opposite."

In light-hearted celebration of 'The King', Goal.com have put together the Top 10 Wrong Pele Predictions.

Pele Prediction: China will qualify for the next round from their 2002 World Cup group.

Outcome: China finish bottom of Group C with no wins, no draws, no points, no goals, as well as -9 in their goal-difference column.

Pele Prediction: Spain are favourites for the 1998 World Cup in France.

Outcome: Spain humiliatingly dumped out in the first round after losing to Nigeria, and drawing with Paraguay.

Pele Prediction: Colombia will win the 1994 World Cup in the USA.

Outcome: Colombia exit the competition in the first round, finishing bottom of their group. Their defender Andres Escobar is also tragically shot dead by an angry fan after Colombia return home.

Pele Prediction: Argentina & France will both reach the final.

Outcome: Both countries eliminated in the first round, France without even scoring a goal.

Pele Prediction: During the famous film starring Sylvester Stallone and Michael Caine, Allies star Pele is brutally fouled in the first half by the Nazi opponents. The injured Brazilian claims there is no way he can continue and is carried off. The Allies are 4-0 down, and a recovery is deemed impossible.

Outcome: Pele returns in the second half and inspires his team to an improbable comeback, even scoring a stunning bicycle kick. Even in fiction, Pele's predictions go wrong. 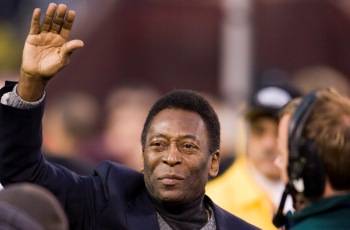 Pele Prediction: Ronaldo will never play football again, and his career is over, following a serious injury for Milan in February 2008.

Outcome: Ronaldo returns in March 2009 for Corinthians, scoring 10 goals in his first 14 games to win the Campeonato Paulista.

Pele Prediction: After starring in the 1991 Under-17 World Cup, which also featured Alessandro Del Piero, Pele proclaims Ghana youngster Lamptey as his successor, ‘The New Pele’.

Outcome: What happens next goes down in football infamy. Lamptey spectacularly fails to fulfil his talent, believing himself that he was cursed by dark forces. The midfielder shifts around clubs such as PSV, Aston Villa, Coventry, Venezia and Ankaragucu, without success, and endures tragedy in his personal life, as two of his children die.

3) Nicky Barmby - Up There With Zidane, Maldini & Ronaldo

Outcome: Nicky Barmby becomes nothing more than an average player, winning 23 England caps, and never even appearing in a World Cup.

Pele Prediction: An African nation will win the World Cup before the year 2000.

Outcome: It is now 2010, and an African country has still yet to get past the quarter-final.

Pele Prediction: Brazil won’t even get past the group stages.


PLEASE NOTE THIS WAS ORIGINALLY PUBLISHED SEVERAL MONTHS AGO