By Rupert Fryer
No big surprises from 'El Diego'...
Diego Maradona has named his provisional 30-man World Cup squad and it came as no surprise to see that Inter Milan duo Esteban Cambiasso and Javier Zanetti are both set to miss out this summer.

Despite his excellent form at the heart of the Inter midfield, Cambiasso has yet to earn a single call-up since ‘El Diego’ took the reigns and was always likely to be overlooked once again.

Veteran full-back Javier Zanetti was thought to be considered a key member of Maradona’s squad before he fell victim to a number of lacklustre performances from Los Albicelestes during qualification. Young Velez centre-back Nicolas Otamendi has emerged as Maradona’s first choice at right-back in a flat back four likely to be made up of four centre halves, with Walter Samuel, Martin Demichelis and Gabriel Heinze set to line-up alongside Otamendi in South Africa this summer.

In midfield, there were expected call-ups for Maradona’s first choice midfield four Juan Veron, Jonas Gutierrez, Angel Di Maria and captain Javier Mascherano. Fiorentina midfielder Mario Bolatti is also thought to be assured of a place in the final 23 as is Jesus Datolo, who impressed during qualification, while Real Madrid’s Fernando Gago is a notable absentee.

The inclusion of the likes of Juan Manuel Insuarralde, Sebastian Blanco, Juan Mercier and Ariel Garce are sure to raise some eyebrows with the sum total of eight international caps between them.

Diego Milito, who has been a revelation for Jose Mourinho’s Inter Milan this season, has been included in the provisional list but remains unlikely to make the final cut. With Carlos Tevez, Sergio Aguero, Leo Messi and Gonzalo Higuain all but guaranteed seats on the plane, Milito is likely to miss out in favour of veteran Boca Juniors striker Martin Palermo. 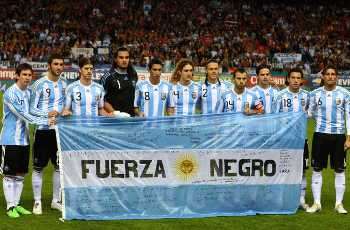