Ben Hayward
The two were once close when they worked together at Barcelona, but they later fell out in spectacular style during the Portuguese's time as coach of Real Madrid in 2011
A rivalry renewed. With Pep Guardiola now in charge at Manchester City, Jose Mourinho installed at Manchester United and the two teams flying high in the Premier League, one of football's famous feuds is ready for another chapter.

Guardiola and Mourinho worked together for four years at Barcelona. The Catalan was a midfield lynchpin back then; the Portuguese an assistant to Bobby Robson and later Louis van Gaal.

A lot has happened since. With Louis van Gaal relieved of his duties by United in May, Mourinho waited in the wings to replace his former mentor in the Old Trafford hotseat. No love lost there. And across the city divide, the 53-year-old will clash once again with a former friend and recent foe in Guardiola as the two Manchester sides meet at Old Trafford on Saturday.

Back in their time together at Camp Nou, Pep and Jose shared a mutual admiration. Guardiola, although still a player, was considered a future coach even then and was known as one of the game's deep thinkers. And the Catalan admired Mourinho's analytical approach to football. At the training ground, the two men spent long hours talking tactics.

When Frank Rijkaard left Barcelona in 2008, Mourinho wanted the coach's job and in his Powerpoint presentation to Blaugrana officials in Lisbon, he outlined his blueprint to former vice-president Marc Ingla. And in that meeting, he named Guardiola as one of his possible assistants.

But Barca had other ideas. Txiki Begiristain, sporting director at the time (and also key later on in signing Pep for City), favoured a move for Guardiola and the Catalan was appointed as first-team coach after a sole season at Barca B. Mourinho was not amused. 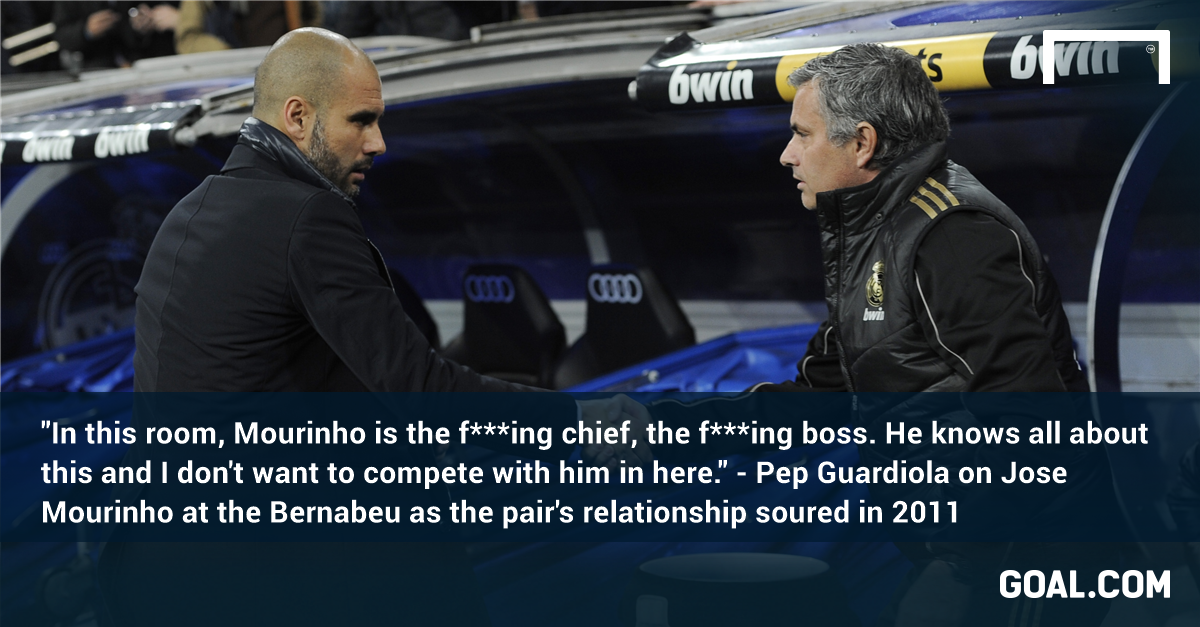 Pep's spectacular spell at Barca began with a treble triumph in 2008-09, but in his second season the former club captain crossed paths with Mourinho in the Champions League - and the Portuguese had the last laugh by eliminating the Blaugrana in the semi-finals with Inter en route to the title.

The Portuguese infuriated Barca fans - and some of the players, including goalkeeper Victor Valdes - by celebrating wildly on the Camp Nou pitch, but before the game Guardiola had spoken highly of his former colleague. "I didn't know he would make it this far," he said in the pre-match press conference. "If I had known Mourinho had this talent as a coach, I would have gone and told the president."

Mourinho's Inter went on to beat Van Gaal's Bayern Munich in the final at the Santiago Bernabeu and after the match, the Portuguese announced that he would be leaving the Italian club. His destination? Real Madrid.

In January, Pep and Jose sat together at the Ballon d'Or ceremony and all seemed well. "We spoke, commented on the gala, the pianist, who was really good, we gave each other a couple of elbows and nothing more," the Catalan joked.

By that point, they had faced each other in just one Clasico clash - an outrageously one-sided 5-0 win for the Blaugrana at Camp Nou in late November. But things later came to a head as Barca and Madrid met five times in a tumultuous 17-day period in April.

After a tense 1-1 draw at the Santiago Bernabeu in La Liga on April 16, they met again four days later in the final of the Copa del Rey at Mestalla. And following a tight first half, Pedro thought he had broken the deadlock when he latched onto a pass from Lionel Messi and fired past Iker Casillas. 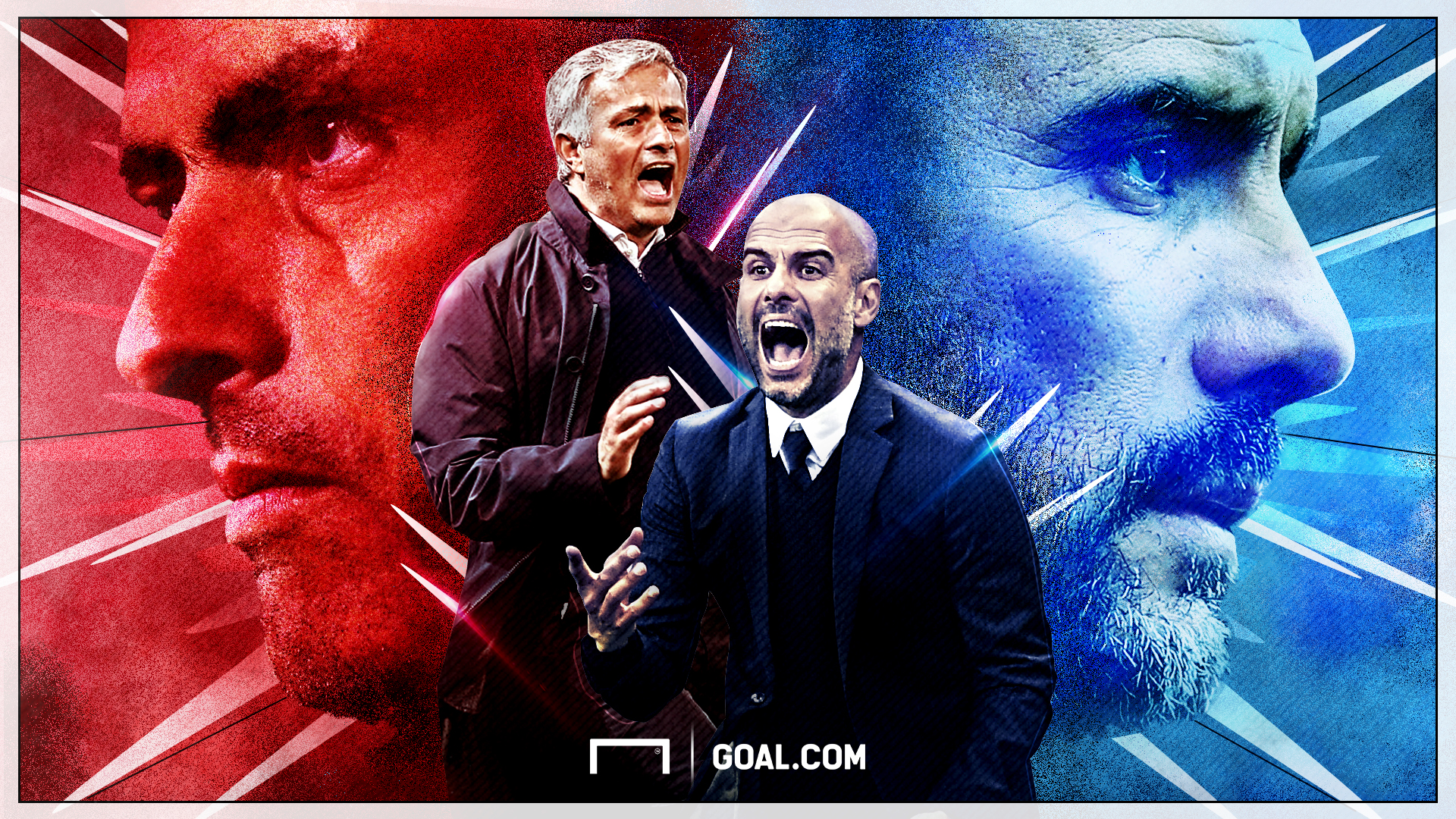 FULL STORY | Who has won more - Mourinho or Guardiola?
However, his strike was ruled offside. Guardiola waved his finger in disapproval, but replays showed the officials' decision was correct as Pedro was indeed a fraction beyond the last Madrid defender, Alvaro Arbeloa, and Real went on to win in extra time as Cristiano Ronaldo headed home from an Angel Di Maria cross.

In a packed press room after the match, Guardiola appeared to question the decision. "The assistant must have great eyesight to spot that Pedro was two centimetres offside," the Catalan coach quipped.

But six days later, ahead of the Champions League semi-final first leg clash between the two teams at the Bernabeu, Mourinho mocked the words of his Barca counterpart.

"We have started a new cycle," he began. "Up until now there was a very small group of coaches who didn't talk about referees and a very large group, in which I am included, who criticise referees. Now, with Pep's comments, we have started a new era with a third group, in which there is only him, that criticises the referee when he makes correct decisions. This is completely new to me."

The Portuguese's provocations finally got to Guardiola and with a Champions League semi-final between the two teams ahead, the former Barca boss chose to react this time with a statement of intent - in the Bernabeu press room of all places.

"Senor Mourinho has permitted himself the luxury of calling me Pep, so I will call him Jose," Guardiola said. "Which one is your camera, Jose? All of them, I suppose... Tomorrow at 8.45pm we face each other on the pitch. He has won the battle off the pitch. If he wants his own personal Champions League trophy away from the pitch, let him take it home and enjoy it. 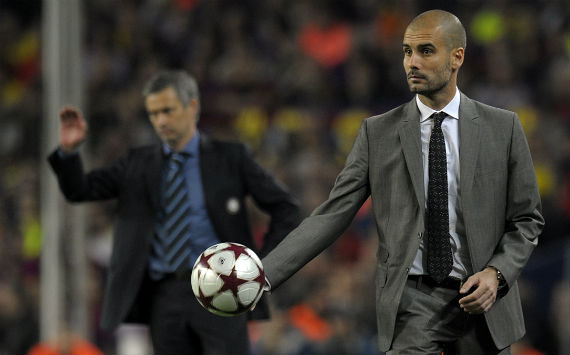 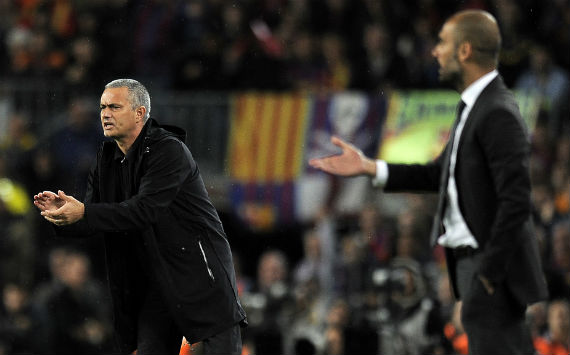 "In this room, Mourinho is the f***ing chief, the f***ing boss. He knows all about this and I don't want to compete with him in here. I'd just like to remind him that I worked with him for four years [at Barcelona]. He knows me and I know him.

"If he prefers to value the views of the journalist friends who take their information in a drip feed from Florentino Perez more than the relationship we had for four years, then that's his choice. I try to learn from Jose on the pitch, but I prefer to learn as little as possible from him off the pitch."

When he returned to his hotel dining room, the Barca squad stood to greet Guardiola with a rapturous round of applause. And on the pitch a day later, the Blaugrana beat Madrid 2-0 to leave the Portuguese complaining about referees and dreaming up conspiracy theories in his infamous "Por que?" ("Why?") rant against the Catalan club in which he claimed he would be ashamed to win the Champions League that way after Pepe was (correctly) sent off in the first match, hitting out at Unicef and UEFA in the process.

The following season, Mourinho's Madrid won La Liga (still the only team to beat a Pep side to a league title) and Guardiola stepped down to take a sabbatical at the end of the 2011-12 campaign. He was tired of life at Barca by now and, although he would not say so, the constant clashes with the Portuguese had taken their toll. Every press conference had begun with a question about something the then Madrid coach has said and what invariably followed from the Catalan was an audible sigh. He was fed up with it.

The two men met once more in Pep's first game at Bayern in 2013 as the German side beat Chelsea on penalties in the UEFA Super Cup, but they have not faced each other again until now. And this time, their rivalry will be intensified again as they coach in the same city as managers of Manchester's two rival clubs.

So even though Pep won't want it, expect more fireworks between Guardiola and Mourinho starting this Saturday at Old Trafford. It is bound to be fascinating.
Close