Daniel Edwards
The Colombians made history back in 1989 when they became the first team from a Pacific nation to lift South America's top trophy - but the shadow of drug cartels was always there
With 15 triumphs in the Colombian Primera Division Atletico Nacional hold the honour of being the nation's most successful side in history. The team led by Reinaldo Rueda have won four of the last seven league titles and aim to cement their position at the top by becoming the first Colombian team to lift a second Copa Libertadores title.

Only Independiente del Valle stand in the Verdolaga's way as the teams gear up for the second leg of the final on Wednesday. It would be a fitting win for the side that have arguably been the most exciting and consistent throughout the South American competition.

Compared to the last winning campaign, in 1989, the club's route to potential success has been relatively straightforward. That glorious victory was marked by violence, murder, and the influence of the two Escobars: Nacional's defensive rock Andres, and the infamous Medellin drug baron Pablo.

The second golden era of Colombian football, after the big-spending exploits of El Dorado which attracted the likes of Alfredo Di Stefano, Adolfo Perdernera and Charlie Mitten among others to the breakaway league in the 1940s and 50s, came in the 1980s. Clubs such as America de Cali, Nacional and Millonarios did not just dominate locally, but for the first time challenged Brazil, Uruguay and Argentina's giants for international honours.

America had come close to breaking the stranglehold on the Libertadores with final defeats in 1985, 1986 and 1987. The Cali side, however, lost out on each occasion to Argentinos Juniors, River Plate and Nacional respectively, despite boasting an expensive side reinforced with the likes of Paraguay star Roberto Cabanas and Ricardo Gareca. The source of these sudden riches? The side's links with the Cali narcotrafficking cartel, which gave them special benefits on and off the field.

"[America] put together an almost invincible side that waltzed through all the stadiums in Colombia, not just because of their great players but also due to the money that came from drug trafficking," Fernando Rodriguez Mondragon, son of the extradited baron Gilberto Rodriguez Orejuela told El Universal. "That also influenced certain results when they started to pay referees money to favour the team."

This great era in the nation's football was played out with the sinister shadows of the cartels forever in the background. America were aided by the Cali cartel, which laundered millions of dollars through the club's bank balances. Pablo Escobar, meanwhile, turned his attention to his native Medellin; not just Atletico Nacional, but also their bitter city rivals Independiente, received support from the drug lord, who looked on from his opulent mansion complete with private zoo and bullring.

Unlike America, however, Atletico Nacional chose to keep faith in Colombian players and dispense with expensive foreign recruits. The backbone of the team was Andres Escobar, the elegant No. 2 who in 1989 was already a star of Francisco Maturana's team at the tender age of 22. Exuberant goalkeeper Rene Higuita was busy reinventing the role behind him, while Leonel Alvarez marshalled the midfield.

Up front, John Jairo Trellez and Albeiro Usuriaga were the focal points of a cavalier four-man attack that, as in 2016, rarely failed to provide the goals. The side started the Libertadores slowly, finishing second in their group behind Millonarios, but then disposed of Racing Club, Millonarios and Danubio - thanks to a stunning 6-0 home triumph in the second leg - to reach the final. It was a great team, but was the more notorious Escobar involved?


Accusations of a 'black hand', illicit interference to hand Nacional the trophy, have dogged the club ever since that win 27 years ago.

In 1990, Uruguayan referee Daniel Cardellino confessed he had received death threats as well as the offer of US$20,000 - the classic plata o plomo, silver or lead choice - to aid Atletico Nacional in a Libertadores game against Vasco da Gama. The clash was replayed, although the Colombians repeated their win. Argentine official Juan Bava had a similar story for one of the ties in 1989; he had been offered "one million dollars" to favour Nacional, while being held at gunpoint.

While he insisted that the game was won fairly, Bava admitted to ESPN that if the game was still drawn at the end, "I would have headed one in to the top corner myself.”

Fair or otherwise, the final arrived in May 1989, with Paraguayans Olimpia standing between Nacional and glory. The first leg, played in the pressure cooker of Asuncion's Defensores del Chaco, ended 2-0 in Olimpia's favour. Back in Medellin, however, the tables were turned. Fider Mino put the ball past his own goalkeeper and Usuriaga added a second for the hosts to send the tie into a penalty shoot-out.

Higuita started the nerve-wracking occasion strongly by keeping out the first penalty, and Escobar calmly stroked the ball home to give Nacional the advantage. But captain Alexis Perez then erred from the spot, forcing the game into sudden-death. Olimpia's players may have felt that tag in something more than a figurative sense, as they missed an incredible four consecutive penalties to give Nacional endless match points. After Vidal Sanabria had spooned the latest failed penalty over the bar, following three big Higuita saves, the Paraguayans were finally put out of their misery. Alvarez fired in the 18th penalty of the shoot-out, crowning Atletico Nacional as the first-ever team from a Pacific nation to lift South America's biggest prize.

It was the proudest moment in the history of Colombian football. But paradoxically, it also marked the beginning of the end for the second golden era. The bribery and threats received by referees from the cartels and gambling syndicates had reached endemic proportions, and arrived at its tragic, inevitable conclusion that same year with the murder of Alvaro Ortega.

"Whoever blows the whistle the wrong way, we will wipe off the map," fellow official Armando Perez had been told by kidnappers the year before. Ortega found out the hard way that the cartels were not bluffing. On November 15 1989, directing a clash between America and Medellin, he disallowed a Medellin goal two minutes from the end with the Cali side winning 3-2. The story goes that Pablo Escobar had bet heavily on his local team, and that decision sealed the referee's fate.

The same night, Ortega and his linesman Jesus Diaz Palacio walked a matter of metres to find a bite to eat when they were intercepted by gunmen. Diaz was told to step aside, and when Ortega started running he was taken down in a hail of gunfire. The hitman walked up to the stricken official and delivered nine more shots at close range. Diaz attempted to fight back, but the killers told him to calm down. "This doesn't concern you, calm down," he was told before the assassins left in a vehicle. 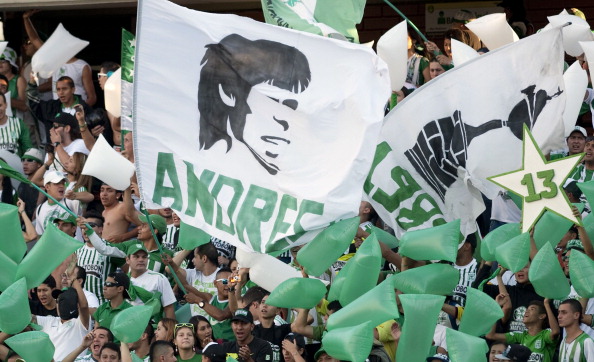 Ortega's death was an eery premonition of what would happen to Andres Escobar in 1994, after scoring that unfortunate World Cup own goal. The defender too was gunned down outside a Medellin restaurant, with the hitmen related to underground betting syndicates with links to drug cartels. The 1989 Colombian championship was immediately suspended, and as no champion was crowned only Nacional were allowed to compete in the following Libertadores as holders.

Two years after that Libertadores triumph Escobar handed himself in to authorities, and in 1993 was gunned down by police. Since the 1990s, and with the cooperation of international authorities, much ground has been recovered from the cartels, making Colombia and Medellin a safer place to live. But the memory of Nacional's most glorious moment lives on, both for the right reasons and as a footnote in one of the country's most chaotic periods.
Close