By Ben Hayward
Luis Enrique's side struggled for much of the match against a spirited Sevilla, especially after Javier Mascherano's red card, but the Argentina attacker proved the hero once more
There were worrying signs for Barcelona. Javier Mascherano was sent off, Luis Suarez forced to depart through injury and Sevilla were putting up a serious fight. But up stepped the man who has saved them so many times before. Two magical moments from Lionel Messi won the Copa del Rey for the Catalan club.

Mascherano saw red for pulling down Kevin Gameiro in the 36th minute. The French forward was through on goal and the Argentine was the last defender. It was the right decision, despite protests from Barca fans inside the stadium.

And when Suarez limped off with a hamstring strain in the second half, it seemed that the deck was stacked against the Catalans. The Uruguayan, after all, had been the team's most in-form player in recent weeks, scoring 14 in Barca's last five Liga games.

With Suarez sidelined and Neymar not exactly firing on all cylinders, Barca were lacking inspiration at that point. But Gerard Pique in defence stopped almost everything, Andres Iniesta was wonderful in midfield and, of course, there was Messi. 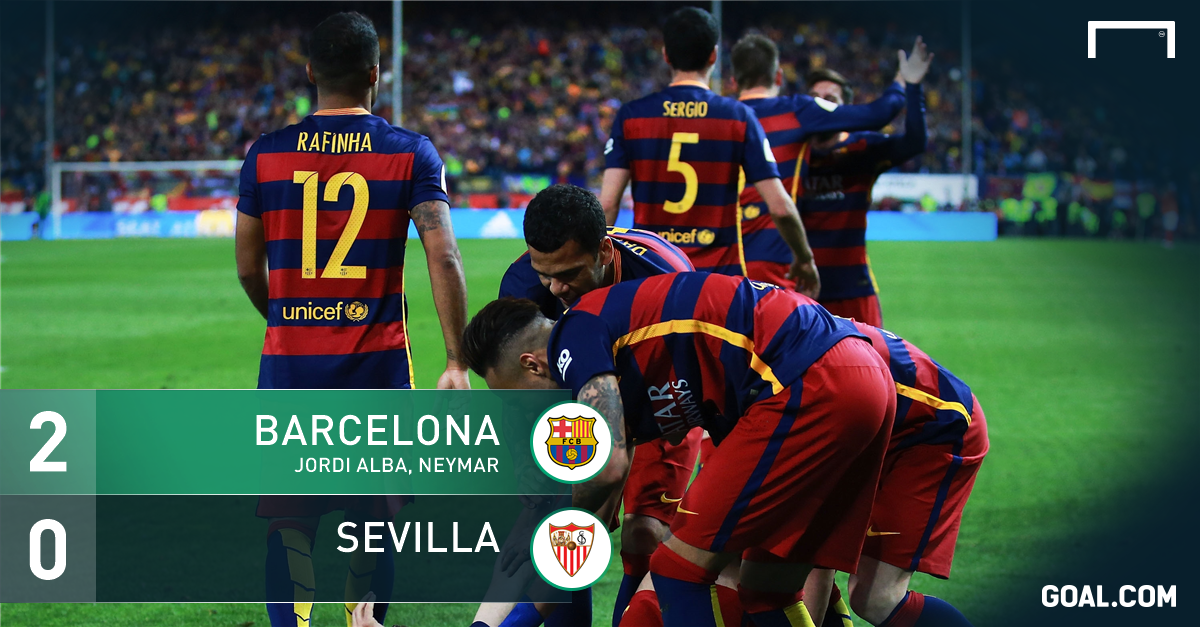 The Argentine was not having his best game by any means, but he can always produce the spark to decide a match at any moment. And that was exactly what happened as the game went into extra time.

Sevilla would not have wanted an additional 30 minutes after their Europa League exertions on Wednesday when they beat Liverpool in Basel. And with their best player Ever Banega sent off right at the end in what seems certain to be his last contribution in a Sevilla shirt before moving to Inter in the summer, things became even more difficult.

There was no a sense that the momentum had swung back in Barca's favour. The fans found their voices, the players pushed, Sevilla sat back - and up popped Messi. The Argentine lofted a glorious pass into the path of Jordi Alba in the area in the first period of extra time and the left-back finished with a single touch. Unai Emery's side, so solid for so long, had been completely carved open in an instant.

That is what Messi can do and with the game approaching its finale and Sevilla now down to nine following Daniel Carrico's criminal challenge on the Argentine, he did it again. This time, the five-time Ballon d'Or winner waited on the edge of the box with the ball at his feet as he sensed an opening. And he picked it perfectly, rolling a beautiful ball through to Neymar for the Brazilian to make it 2-0. 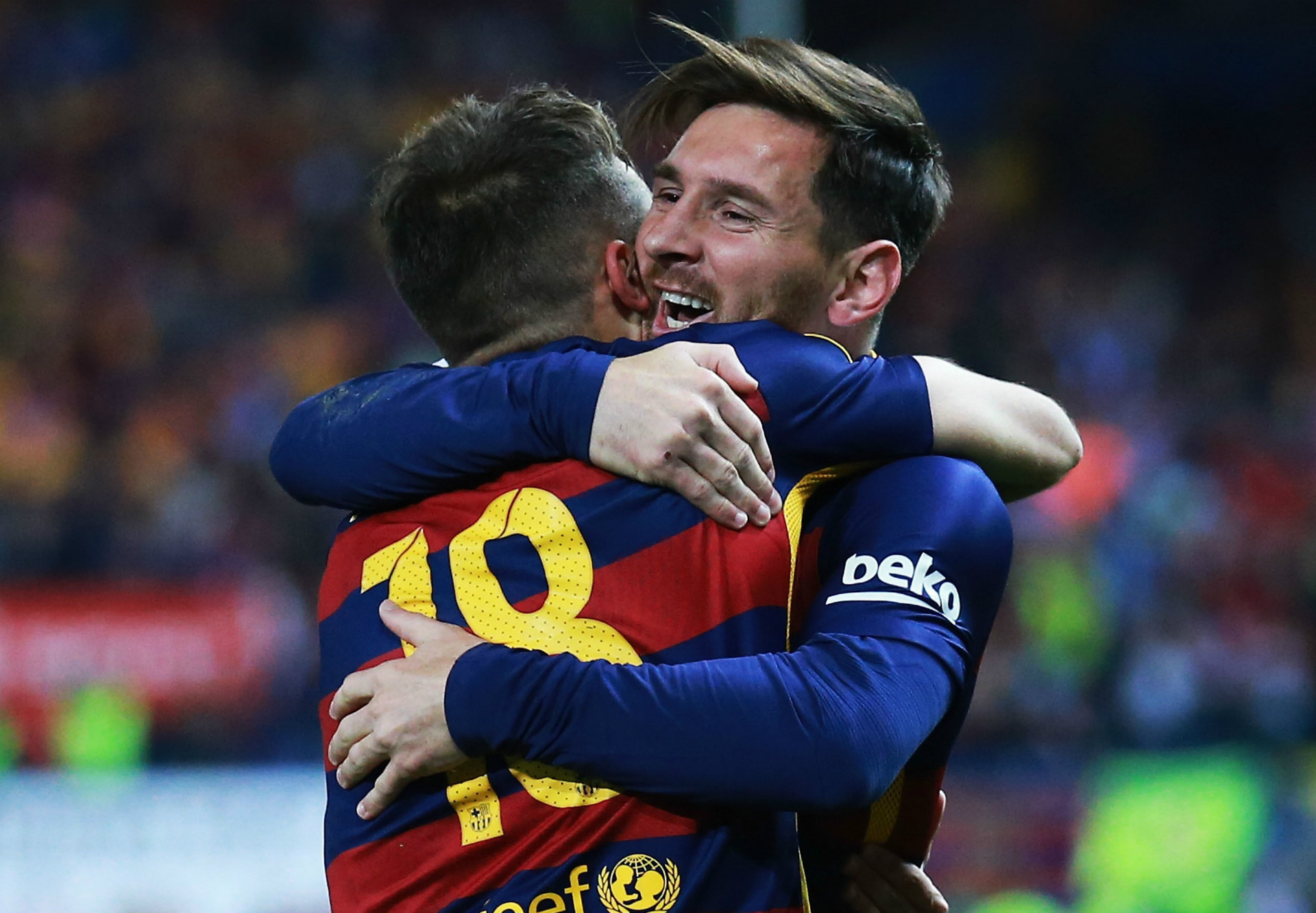 FULL STORY | Barca clinch double by beating Sevilla in extra time
He hadn't scored but he didn't need to. Those two moments of magic pulled Barca through a tough test in a thrilling and tense cup final that sees the Catalans follow up last season's treble triumph with a Liga and Copa double this time around.

It has not been an easy end to the season for Barca. Luis Enrique's men made hard work of La Liga after losing three consecutive games in April and also saw their Champions League hopes ended by Atletico Madrid at the Vicente Calderon.

But back at the same stadium on Sunday, it was a much happier outcome this time. Having held on to claim the title in the Primera Division, Barca conclude the campaign with a domestic double and four trophies in total, having won the Club World Cup in December and previously - and curiously - started the season with an extra-time triumph against Sevilla in the Uefa Super Cup.

So it all ended where it had begun - with another trophy against Sevilla. As much as anything, though, it was Barca's mentality on the night - and the wonder of Messi - that pulled them through this test. They made it over the line with a limp, but will need a deeper and stronger squad next term to avoid a repeat of recent fatigue. 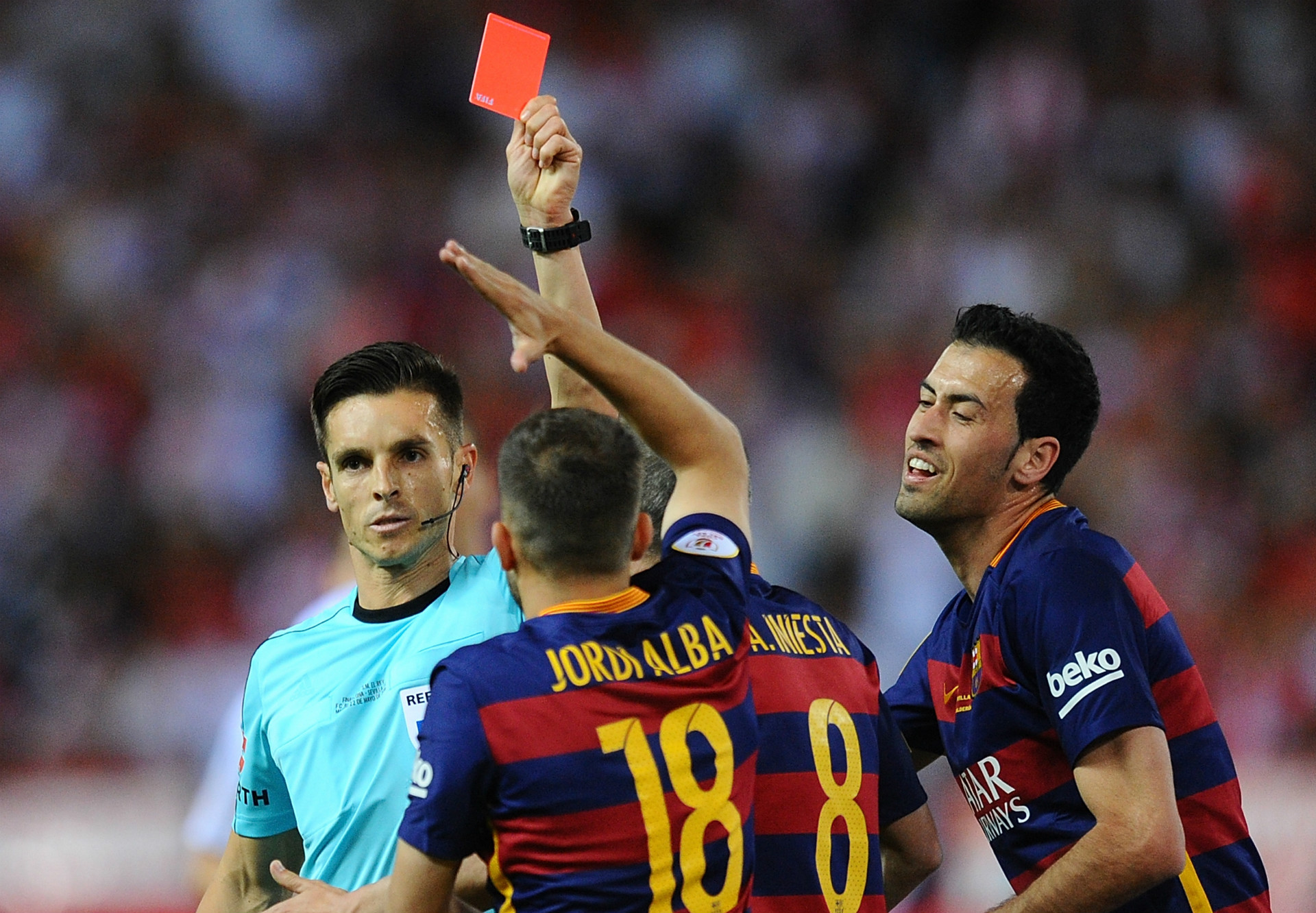 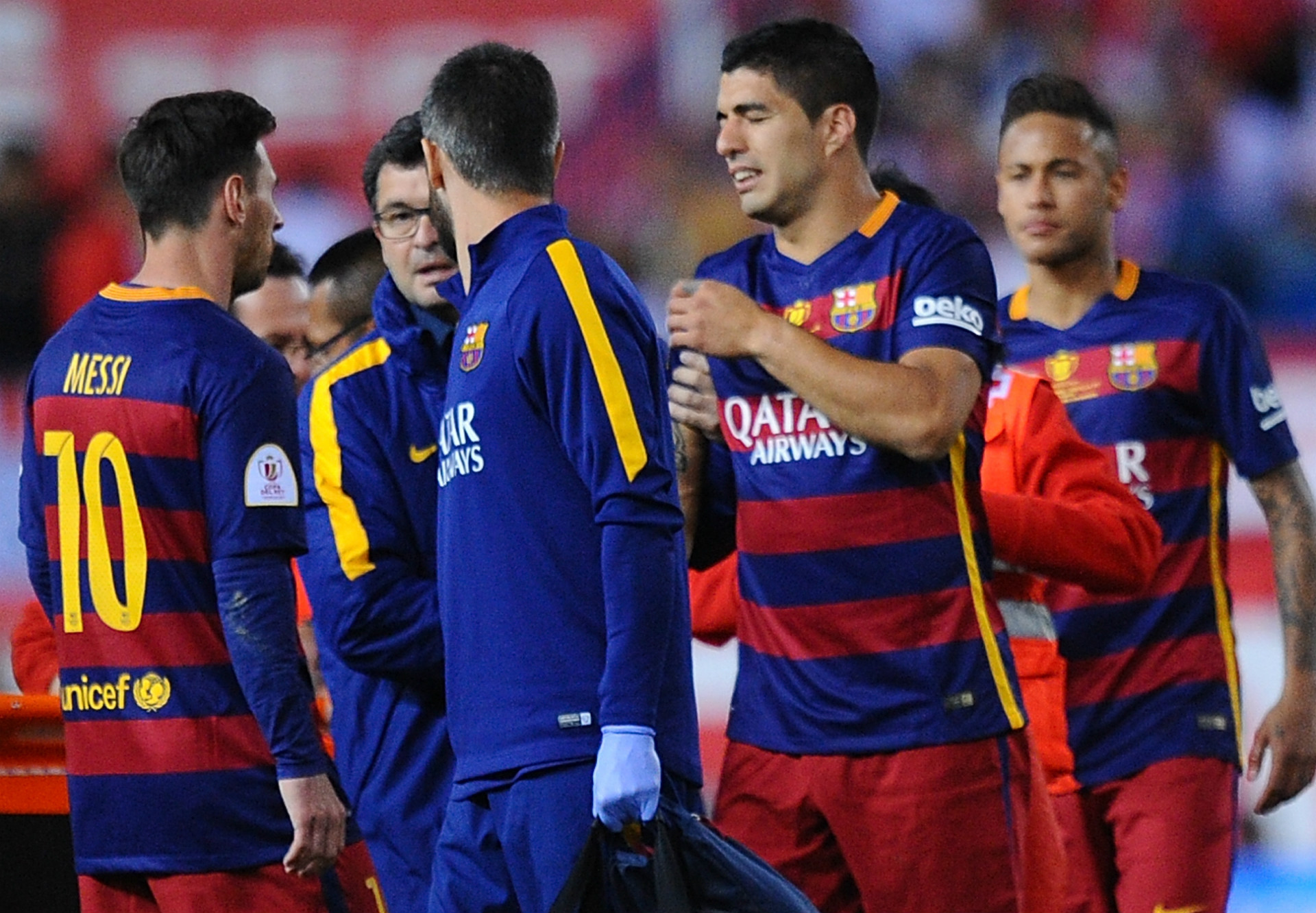 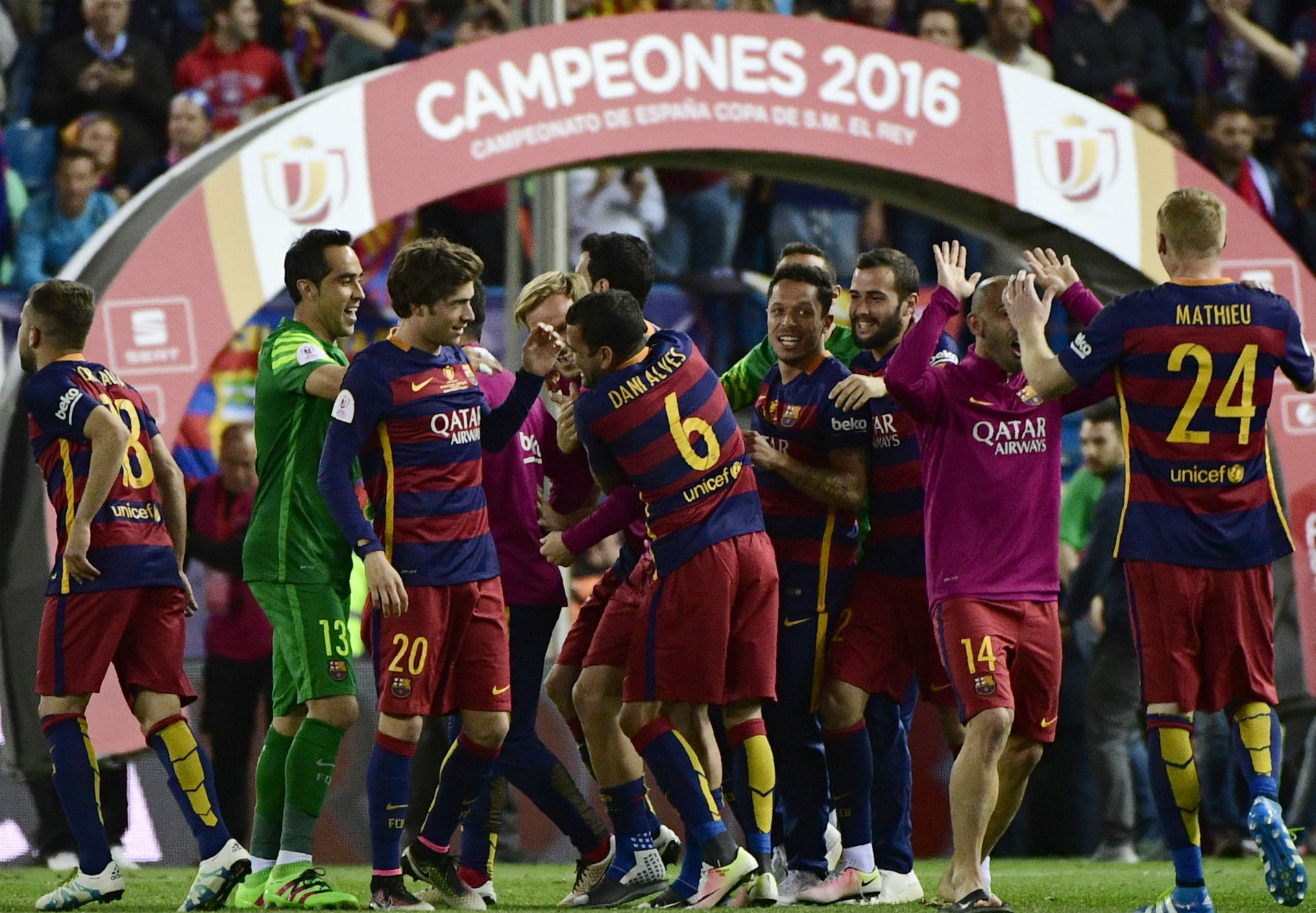 And if not, there's always Messi. The Argentine attacker has dug his side out of a hole on so many occasions before and he did it once again to claim the Copa on Sunday. His two moments of genius ensured double delight for Barca and seven trophies in just two seasons for Luis Enrique is a measure of the sustained success at Camp Nou.

Such is that success, in fact, that some have claimed that a double is somewhat underwhelming for Barca - especially if Real Madrid go on to win the Champions League next weekend. But that is merely a mark of what the Blaugrana expect these days and whatever happens in Milan on May 28, this has been another super season for the Catalans.

The Messi era lives on.
Close