The Gunners were beaten 2-0 by West Ham in their first Premier League fixture of the season as goalkeeper Petr Cech made mistakes for both goals
A reality check for Arsenal in every sense. After a summer of talk that Arsene Wenger's side are finally ready for a genuine title challenge, they were brought crashing down to earth with a 2-0 defeat to West Ham in their first Premier League game of the season.

Petr Cech, the symbol of Arsenal's elevated status as title hopefuls, twice picked the ball out of his net. Both times, the former Chelsea goalkeeper was badly at fault.

For Cheikhou Kouyate's 43rd minute opener, he punched thin air from a crossed free-kick and ended up eating the turf as the West Ham players celebrated. When Mauro Zarate scored the Hammers’ second, Cech was wrong-footed by the forward’s powerful low strike from the edge of the penalty area. 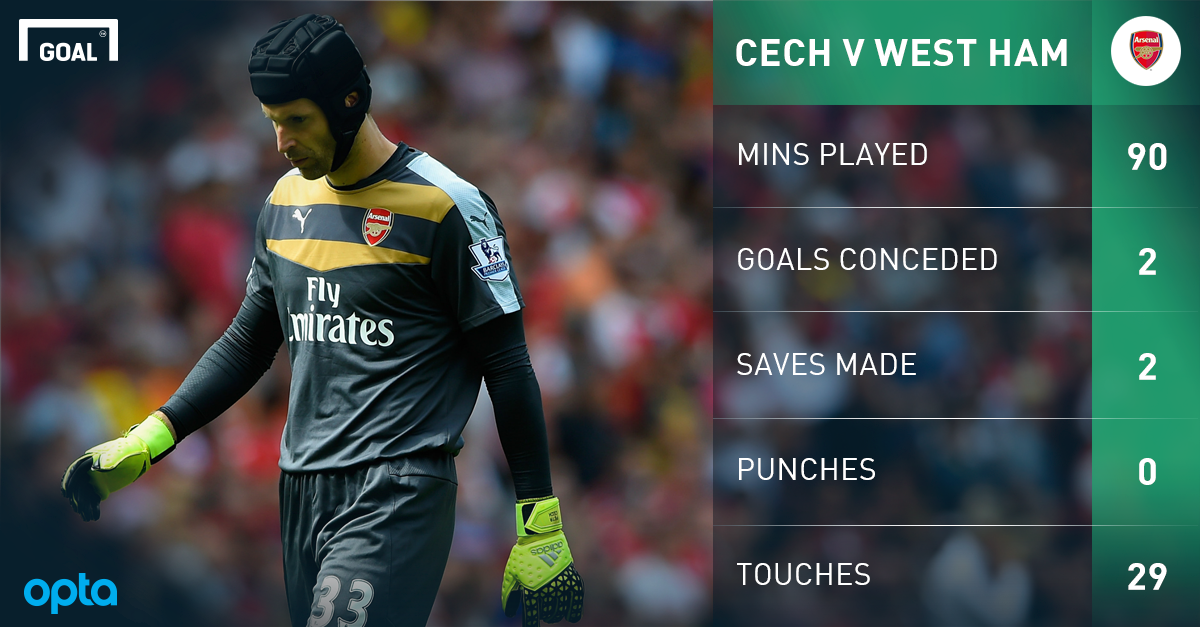 It was a nightmare league debut for the 33-year-old, but fortunately for him and Arsenal, there are 37 games to put it right.

Nor was Cech alone. Arsenal’s defenders made far too many errors, the attack lacked incision as Olivier Giroud bumbled through the 90 minutes, while record signing Mesut Ozil was virtually anonymous as he was marked out of the game by 16-year-old Reece Oxford.

This need not be seen as comprehensive proof that Arsenal are going to hoodwink us again, that nothing has changed in north London. But Wenger’s men do face a tricky trip to Crystal Palace next week where they could do with proving they have the defensive strength and mental resolve to battle for the Premier League trophy for the next nine months.

“It’s difficult but it’s part of our job,” Wenger told reporters. “A successful team is down to how you respond to difficult moments. It’s never a clear motorway and we have a difficult start to the season.”

As worrying as Cech’s mistakes will be the pathetic marking for Kouyate’s goal and the weak attempts to clear before Zarate’s strike. It was all so... Arsenal.

“The way we conceded just before half-time with the experience in our team, it was difficult to understand,” Wenger said.

“It was a collective lapse. There are many things to say about that. I knew that if the delivery was good, we were in trouble before the free-kick was taken.

“The concentration and organisation was not there from the set-piece - too far from our goal, too much distance to run into, we killed ourselves.”

Questions will also be asked now of Wenger.