The World Cup winner does not say much but when he does open his mouth, it's always worth listening to - while some of the game's greats have been awestruck by the midfielder
By Mark Doyle

Marcello Lippi once described Andrea Pirlo as "a silent leader who speaks with his feet". In that sense, Pirlo is a poet of the football field, a master of style and rhythm. He can do whatever he wants with the ball, but he runs the game because he understands the game. He is one of the football's great thinkers.

He knows it, too, as evidenced by the fact that he called his autobiography, 'I think, therefore, I play.' It is difficult to think of any other footballer who could have selected such a seemingly pretentious title without provoking widespread ridicule.

And that is also why when this "silent leader" does speak, the whole footballing world sits up and takes notice. And why many of the game's greats have been left enthralled by his genius. As he bids farewell to his European career by joining New York City FC, here are a selection of the best quotes by and about Pirlo... "I’m a bit of a wandering gypsy on the pitch... All I’m after is a few square metres to be myself. A space where I can continue to profess my creed: take the ball, give it to a team-mate, my team-mate scores. It’s called an assist and it’s my way of spreading happiness."

- The pursuit of happiness, according to Andrea Pirlo.

"After the wheel, the PlayStation is the best invention of all time."

- Pirlo on his favourite pastime - other than football, of course!...

- However, it's fair to say that the midfielder is not a fan of the pre-game warm-up.

"Being part of a team that belongs to everyone makes me feel good and at peace with myself. A lot of the time, it's better than sex: it lasts longer and if it all falls flat, it can't just be your fault."

- Pirlo prefers to get his kicks representing Italy.

"Watching him play, I thought, 'God exists!' Because it’s simply embarrassing how good he is."

- Gianluigi Buffon had an epiphany the first time he saw Pirlo in action.

"I’ll never watch that match again. I’ve already played it once in person and many other times in my head, searching for an explanation that perhaps doesn’t even exist.""

- Pirlo on former club AC Milan losing on penalties to Liverpool in the Champions League final - after being 3-0 up at half-time.

"I don’t feel pressure … I don’t give a toss about it. I spent the afternoon of Sunday, 9 July, 2006 in Berlin sleeping and playing the PlayStation. In the evening, I went out and won the World Cup."

"To pass the ball to Pirlo is to hide it in a safe."

"Roy Hodgson mispronounced my name. He called me Pirla (a Milanese term meaning 'd**khead'), perhaps understanding my true nature more than the other managers."

"Even Sir Alex Ferguson, the purple-nosed manager who turned Manchester United into a fearsome battleship, couldn’t resist the temptation. He’s a man without blemish, but he ruined that purity just for a moment when it came to me. A fleeting shabbiness came over the legend that night."

- Pirlo on former Manchester United boss Alex Ferguson electing to man-mark him during his Milan days.

"When I watch Pirlo play, I have to admit that it's a wonder to behold. I remain stupefied by him and I often watch Juventus games on TV only to admire him." 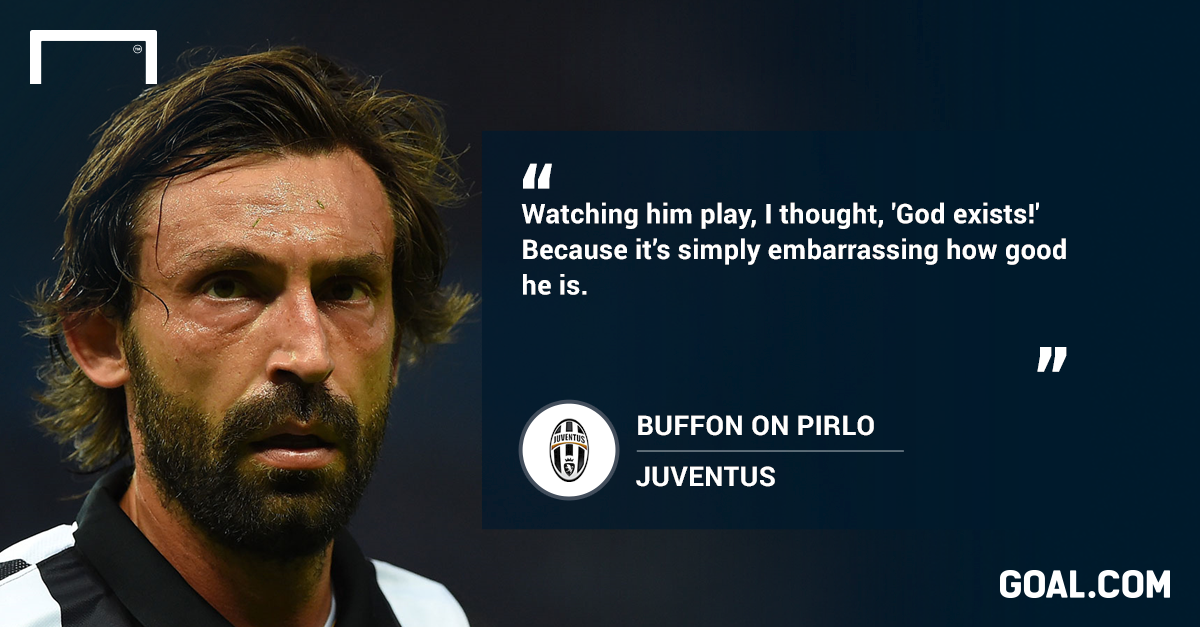 "I then lifted my eyes to the heavens and asked for help, because if God exists, there's no way he's French."

- Pirlo sought divine intervention before his spot-kick in the shootout in the 2006 World Cup final against France.

"We also need Mario Balotelli. I’m not sure he really appreciates it yet, but he’s a special kind of medicine, an antidote to the potentially lethal poison of the racists you find in Italian grounds... Whenever I see Mario at an Italian training camp, I give him a big smile."

- Pirlo on the importance of Balotelli to the Italian game.
"He's the epitome of class; a man who leads the team using all the weapons that some consider antiquated yet, for me, are irreplaceable: deception, the pause, the fake, precision ... These are all the exact opposite of that word that is so fashionable today and such a disaster for the game: intensity."

- Jorge Valdano hails Pirlo's old-school qualities.
"[Antonio Cassano] says he's slept with 700 women in his time, but he doesn't get picked for Italy any more. Deep down, can he really be happy? I certainly wouldn't be."

- Pirlo burns one of his former international team-mates!

- Carlos Tevez pays tribute to his Juventus team-mate.
"If I look in the mirror when I get up, or before going to bed at night, I see a man of average ugliness. With stubble, an unruly mane of hair, a squint nose, slightly protruding, ears and bags under my eyes. But I also see a man who’s completely happy with the figure staring back at him.”.”

"Andrew Pirlo belongs to a protected category: he is the footballer for everyone. Every stadium is his stadium, the fans watch him and they see a universal champion, capable of transcending the concept of support for only one club."