Some describe him as the most committed player to have worn the Ghana colours. Others say he is the best captain ever in the history of Ghanaian football. One thing is certain - Stephen Appiah is adored by almost everybody in his homeland.

His patriotism, affability and generosity combined to earn him a special place in the hearts of Ghanaians.

Appiah has been off the playing field for a while now, but he is preparing to officially end it all on Saturday.

The build-up has been very encouraging. Appiah has been meeting prominent citizens to extend invitations to them for the upcoming testimonial match. The ex-Juventus man has visited the two former presidents of Ghana - Jerry John Rawlings and J.A Kufuor. He has also paid courtesy calls on the National Chief Imam, the Asante King and the house of parliament.

At his meeting with the parliamentarians, one of the legislators remarked “we missed you in Brazil". That was to say Appiah’s leadership skills would have been key in averting the bust-up at the Black Stars’ camp during the 2014 World Cup.

Bianconero| Appiah played for Juventus between 2003 and 2005

Ghana FA president Kwesi Nyantakyi is also reported to have said Appiah is the best captain he has worked with.

British High Commissioner to Ghana, Jon Benjamin, a staunch West Ham United fan, was full of praise for Appiah when the former Ghana star extended an invitation to him on Tuesday.

"Every player has ups and downs but Stephen's career has recorded more ups. We at the British High Commission are honoured to have been invited and we wish to confirm our presence," Benjamin added.

Appiah’s name will forever remain in the history books as the first captain to qualify Ghana to the World Cup in 2006.

He followed that up with another qualification in 2010, where the Stars reached the quarter-finals, having clinched a round of 16 berth four years earlier. 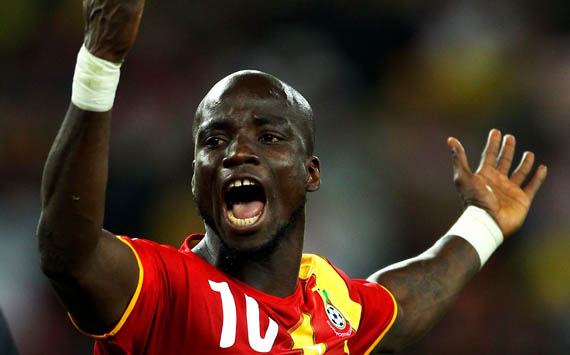 A few days ago, Appiah recalled that his biggest regret in football is not to have won a title with the Black Stars. Indeed, the Black Stars have not won a trophy since 1982. However, he can console himself with the Fifa U-17 World Cup crown in 1995.

At club level, he has played for some prestigious teams - Udinese, Juventus, Fenerbache among others. Back home, he featured for Accra Hearts of Oak - one of the most successful clubs in Ghana.

Many football stars will fly to Accra to grace the occasion. The testimonial match between a Stephen Appiah XI and the Black Stars will certainly be a massive sell-out.

Many have been wondering what is next for the football legend after he bids his active playing career goodbye this weekend.

Well, Appiah himself has said many times that he wants to go into coaching, starting with juvenile teams.

Certainly, his fans can’t wait to see him on the touchlines as he begins a new chapter in his footballing life.