ANALYSIS: The respective front-lines of the Clasico rivals are set to duke it out in Sunday's headline bout
By Kris Voakes | International Football Correspondent


The culture of the individual is said to have taken over from the overriding team ethic of football. But on Sunday, two of the modern game’s greatest collectives come head to head as Barcelona meet Real Madrid at the Camp Nou.

Yet it is still not the traditional match-up of 11 against 11 that has everybody transfixed so much as the face-off between the sport’s two greatest strike forces that has the world talking ahead of the latest Clasico.

While Real Madrid have the much-lauded BBC of Gareth Bale, Karim Benzema and Cristiano Ronaldo, Barcelona’s Lionel Messi, Luis Suarez and Neymar have been dubbed the MSN.

It is typical of the battle between the two clubs. Barca make headlines with Messi, Madrid with Ronaldo. The Blancos’ front-line has a nickname, so too must the Catalans trio have one.

But which is the best-performing of the two triumvirates as the Gran Derbi approaches?

In the opening half of the campaign Real Madrid’s superiority was summed up by the brilliance of their front three. They led La Liga with authority, collected the Uefa Super Cup and strolled to the Club World Cup title. All the while, Bale, Benzema and Cristiano were thriving.

But their form since the break has been nowhere near as convincing. In 2015, the front three are combining for 1.3 goals per game, down more than a goal on their average in the first half of the season.

And that fall has been replicated in Madrid’s results, with five defeats in 16 games seeing them fall off the top of the table, suffer elimination from the Copa del Rey and very nearly go down to a humiliating Champions League exit against Schalke. 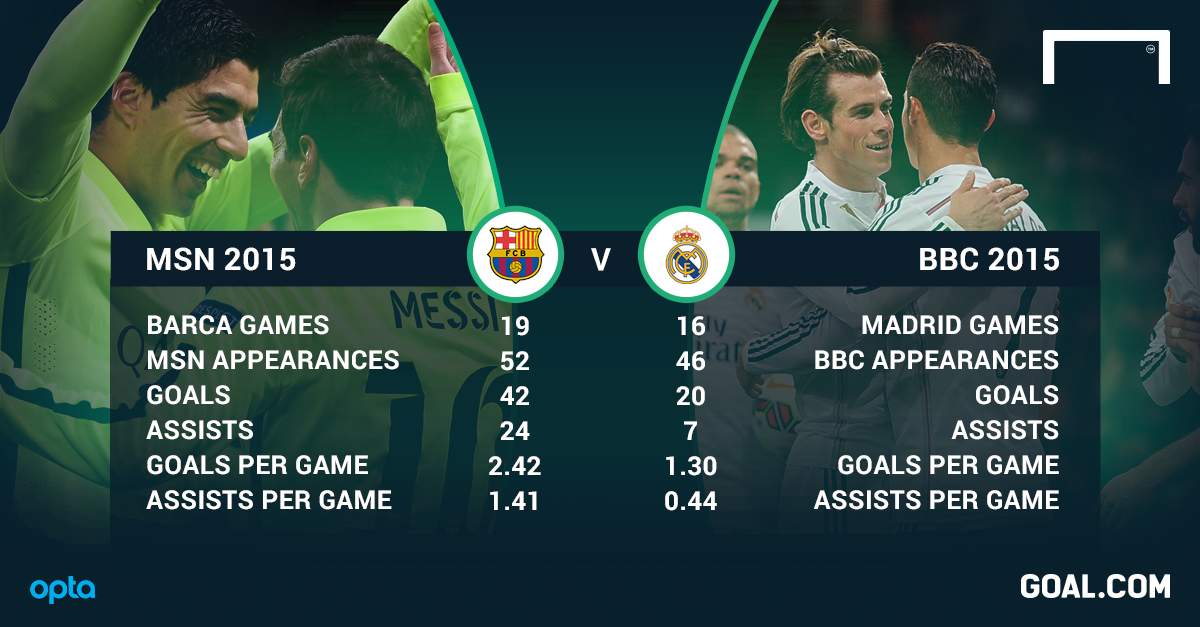 Barcelona, on the other hand, have benefitted from far greater consistency in their front line. In a total of 52 appearances between their trio pre-Christmas, Messi, Suarez and Neymar netted 40 goals to give Barcelona an average of 2.3 per game.

And in 2015 they have added 42 more at a mean of 2.42, propelling the Catalans to the top of La Liga and into the final of the Copa del Rey, and most recently beyond English champions Manchester City in Europe.

Even in assists, it is Barca's boys leading the way. The MSN have racked up 24 assists this year compared to the BBC’s seven, meaning their interplay is directly resulting in more goals for one another.

There can be no doubting that they are the hottest attacking unit in the world at the moment, and former Barca star Rivaldo told Goal that it is the Messi-inspired Blaugrana front three which makes them the favourites at the Camp Nou.

“Both have brilliant players full of quality and goals. And each team’s forward line has one of the world’s best players leading them,” he explained.

“Messi’s form and goal-scoring at the moment means he can give Barcelona victory. But Real Madrid are a really strong team and they could surprise everyone and take a beautiful win.”

And David Villa is in agreement, the ex-Barcelona striker making it clear to Goal that he sees the tussle of the two attacking units being key to the result.

“Barcelona’s strikeforce is better than Madrid’s. That is all.”

It seems inevitable that the winning moment will come from one of the leading men. Messi or Ronaldo? Neymar or Bale? Suarez or Benzema? Form is with Barcelona’s three amigos, but their Madrid counterparts are due a return to their very best.

MSN or BBC? Sunday will decide who is the real headline act.