COMMENT: The Portuguese played a pivotal part in both of the Welshman's strikes as Madrid beat Levante 2-0, but gestured selfishly instead of looking pleased for his team-mate
By Ben Hayward at the Santiago Bernabeu


It should have been a happy moment. Gareth Bale blasted into the corner to end a goal drought dating back to January 24th and set Real Madrid on their way to a morale-boosting win after three games without a victory. But Cristiano Ronaldo reacted petulantly by waving his arms angrily - and there was worse to come.

Ronaldo thought he had scored Madrid's first, but saw his acrobatic effort cleared off the line before Bale buried the rebound, the Welshman covering his ears in a gesture surely aimed at his detractors in recent weeks. In the background, meanwhile, Cristiano cut a frustrated figure as he continued to lament the superb saving block by defender Ivan Ramis that had denied his original effort.

And the Portuguese looked less than amused as his low drive later in the first half was touched into the net by the former Spurs winger. Initially it had seemed to be Ronaldo's goal, but the stadium announcer gave it to Bale - and there were whistles from some members of the Bernabeu crowd.

Under fire for failing to score in his previous nine games, Bale's double got the boo boys back on his side after he was jeered by a section of supporters before the game, but the winger's return to form did little to impress Ronaldo.

The Portuguese trudged off last when the half-time whistle went and goalscoring opportunities were few and far between for the 30-year-old in the second period. He blasted over the bar late on and was even whistled himself after losing the ball in a promising position just outside the Levante box.

"Ronaldo was alive in both goals," coach Carlo Ancelotti said afterwards. "He was alive and even though he didn't score, Cristiano helped set up the two goals for Gareth, so his performance was decisive." 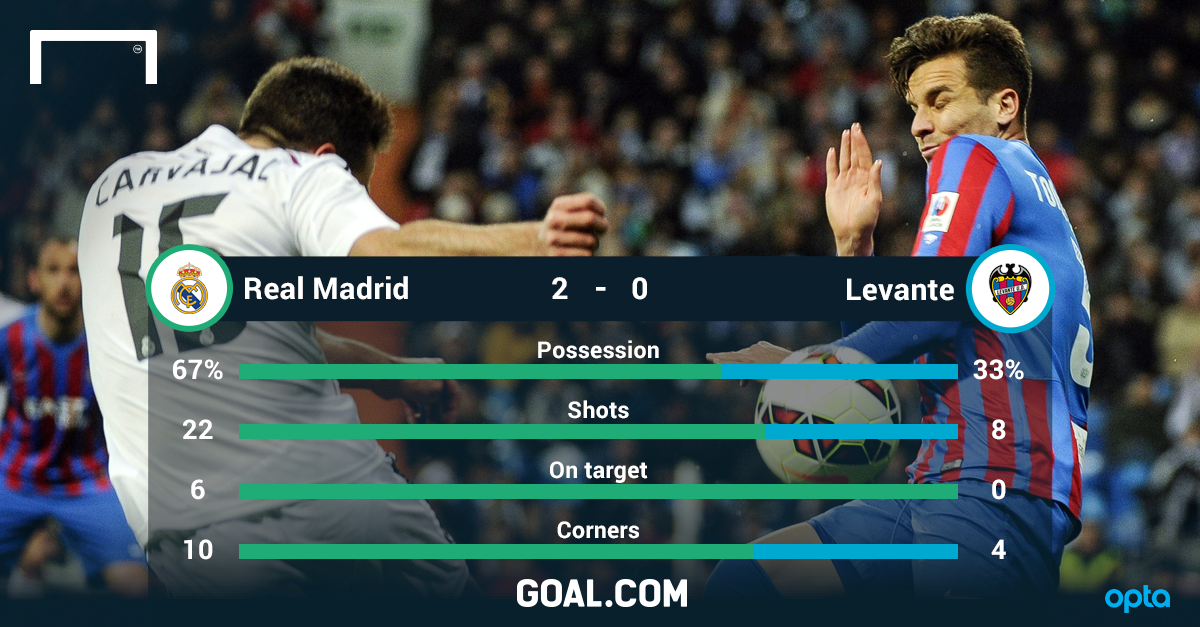 That, however, seemed scant consolation to the three-time Ballon d'Or winner. Overtaken in the race for the Pichichi prize by Lionel Messi on Saturday and two goals adrift of the Argentine in all competitions as well this term, Ronaldo was eager to score in this one, but bowed his head in disappointment every time a chance went begging or a cross was cleared.

But Bale, in truth, had earned his goals. Criticised for his negligible defensive contribution in recent weeks, the winger worked much harder in this match and received his reward. And Madrid's improvement from the recent defeats against Athletic Club and Schalke also owed much to the presence of another former Tottenham player: Luka Modric.

"Modric and Sergio Ramos made important contributions," Ancelotti said. "The presence of Modric helps Bale because they played together at Tottenham and they know each other really well."

For his part, Ronaldo should have been content to have played a pivotal part in two goals that saw his side return to winning ways and also that he helped an important team-mate regain some much-needed confidence ahead of the crucial Clasico clash away to Barcelona next weekend.

Instead, the Portuguese's petulance is likely to do little for team spirit ahead of a game that could well make or break Madrid's stuttering season. Hugely driven and hungry to score goals galore to boost his incredible individual stats, Ronaldo's reaction to Bale's two strikes was out of order and totally unacceptable for a player of his experience and stature. There's no 'i' in team, Cristiano.