The best performers in the latest round of Italian league action are recognised by Goal in our all-star XI
After a fortnight of uncertainty over the goings-on at Parma, Serie A was finally back to its full complement of fixtures for Round 26. And there were a couple of starring performances in the weekend's biggest games which were always likely to feature in the latest Goal Team of the Week.

Samir Handanovic made a couple of excellent saves for Inter in the big match at Napoli on Sunday night, and his side's late rally would not have been possible without the big Slovenian's interventions. It might not have been among his very best performances, but he once again proved his worth to the Nerazzurri in the 2-2 draw.

Palermo picked up a point at Cesena, but that probably wouldn't have happened without Robert Vitiello. The full-back was in great form and also made the tackle of the round in the opening moments to deny Gregoire Defrel with an inch-perfect challenge. Stefan Radu gets the left-back slot after a commanding defensive showing combined with a buccaneering sensibility down the wing helped Lazio to a huge win over Fiorentina in Monday's big game. 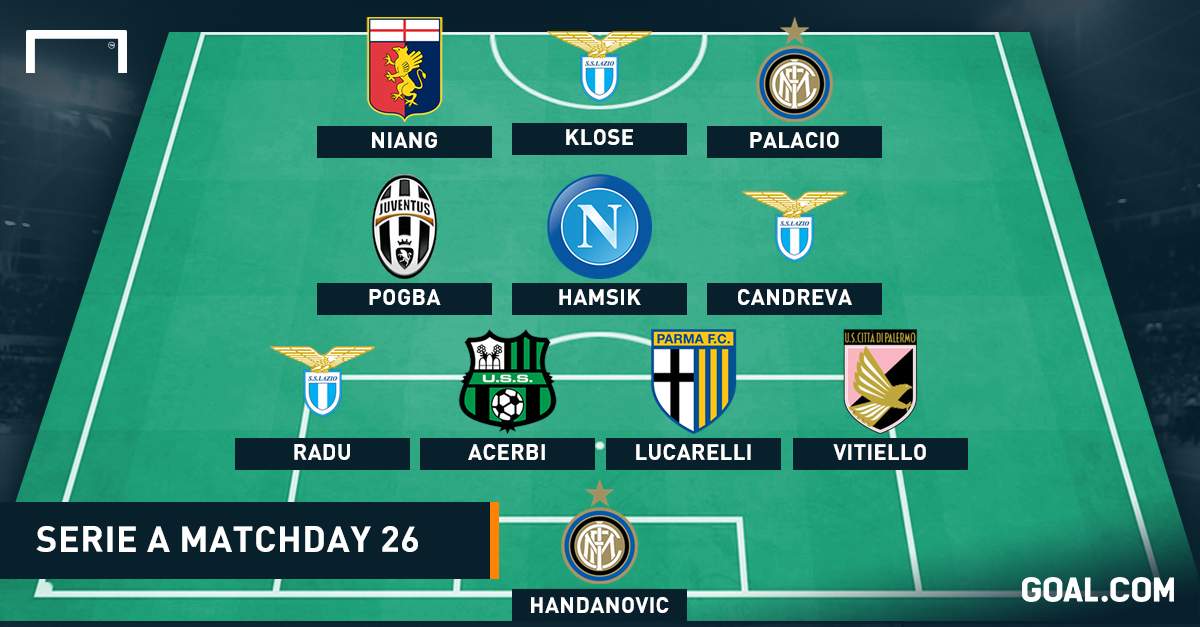 Francesco Acerbi helped Sassuolo almost take a point from champions Juventus, but it is Alessandro Lucarelli who deserves special mention. After two weeks in which he has become spokesman first and footballer second, the Parma skipper was in great form in the 0-0 draw with Atalanta which marked their return to the playing field.

In midfield, Antonio Candreva gets the call after a typically dominant display in Lazio's 4-0 stuffing of Vincenzo Montella's Viola, which included a fine goal, while Marek Hamsik is deserving of a place following his captain's showing in Napoli's 2-2 draw with Inter. And Paul Pogba ended a week in which there was much speculation about his future by breaking the deadlock late on to give Juventus three points against Sassuolo... Talk about big players and big moments.

M'Baye Niang continues to excel with Genoa, causing Empoli all sorts of problems and netting the first goal in the 1-1 draw at the Carlo Castellani, while Rodrigo Palacio instigated Inter's fighback in Naples. The Argentine scored one and won the penalty for the other as the Nerazzurri snatched a point. But Miroslav Klose was the headline performer, scoring twice late on to stamp on Fiorentina's throats in the big fourth-against-fifth clash at the Stadio Olimpico.
Close