COMMENT: The Portuguese squandered several chances as Real dropped two points in the 1-1 draw at home to Villarreal - and is off form when his team need him most
By Ben Hayward at the Santiago Bernabeu

Unlucky for some. Cristiano Ronaldo registered 13 shots for Real Madrid in the Blancos' disappointing draw at home to Villarreal on Sunday, but only managed to score from the penalty spot and the Portuguese's poor form of late leaves the Liga leaders lacking inspiration from their finest footballer.

This was a hugely disappointing evening for Madrid. Up against a much-changed Villarreal side missing many first-choice players, Carlo Ancelotti's men were expected to make light work of the fixture. Instead, they made life difficult for themselves and dropped two vital points.

Villarreal started strongest, just as they had done when the two teams met at El Madrigal earlier this season. Then, goals from Luka Modric and Ronaldo gave Madrid a comfortable victory in the end.

This time, Madrid needed a superb save from Iker Casillas and an impressive diving header by Dani Carvajal to keep them on level terms in the first half and created very little at the other end - even though Villarreal's best defender Mateo Musacchio started on the bench.

Gareth Bale was particularly poor, using his left foot when it looked easier to cross with his right, misplacing passes, making poor decsiions with his final balls and failing to find the target with a header from close range. Late in the half, one wayward pass drew whistles from frustrated fans at the Santiago Bernabeu. It was hardly surprising.

But at least Bale was involved and that was more than could be said for Ronaldo in a subdued first 45 minutes for the Portuguese, a peripheral figure when Madrid needed him most. 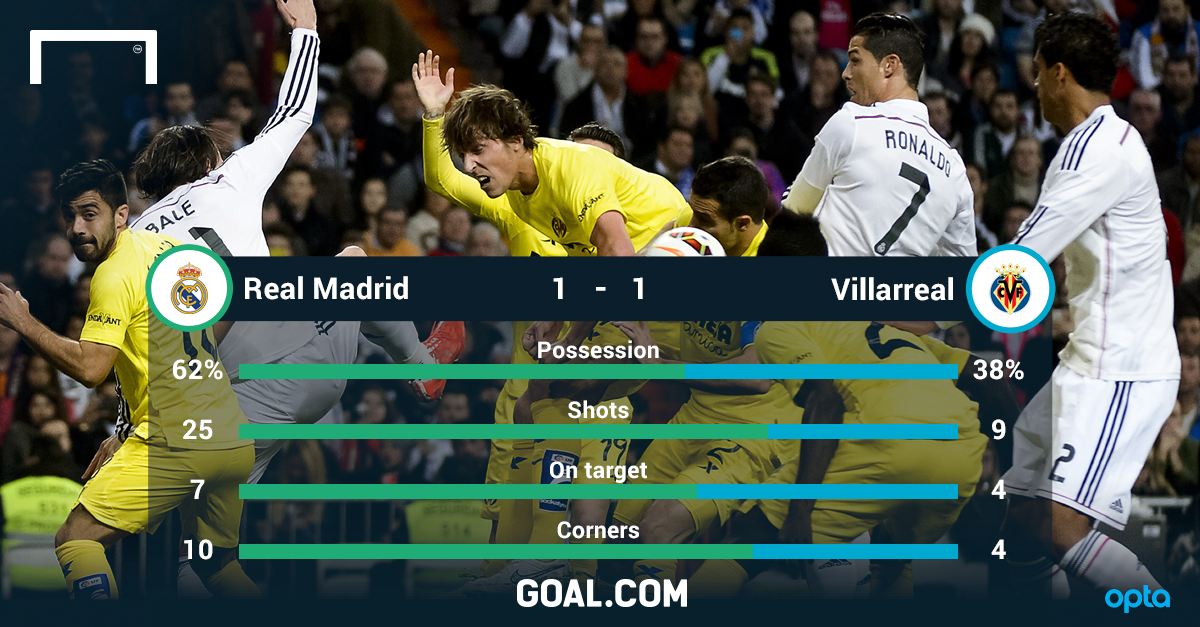 The 30-year-old was much more involved in the second period and gave Madrid the lead from the penalty spot after he himself was hauled to the ground by Eric Bailly. It looked as if that had got Ancelotti's men out of jail, but Gerard Moreno's excellent equaliser minutes later meant they were back to square one.

Madrid had many chances to win it after that setback and almost all of them fell to Ronaldo. Still struggling to find the form he showed late last year, Real remain vulnerable when he is below his best. He is not quite right and that showed as he had one header saved brilliantly by Sergio Asenjo while several other efforts failed to hit the target. He also sent two free-kicks harmlessly over the crossbar as he fought desperately to drive his team to victory.

Fans called constantly for "more balls" from the players and also chanted the name of Modric. How Madrid have missed the Croatian midfielder during his injury absence; they also lack leadership in defence with Sergio Ramos injured. Madrid could really do with an on-form Ronaldo right now.

To make matters worse, Carlo Ancelotti reacted late with his changes. Jese came on for Lucas Silva but screwed an effort wide with the goalkeeper already committed, much to Ronaldo's annoyance. The Italian was also whistled for the seemingly strange decision to replace Isco with Asier Illarramendi.

"The coach makes changes because he thinks they will help the team," he said afterwards. "If the fans don't understand that, I'm sorry - but I made the decision to bring more balance to the team."

And he added: "It wasn't a physical problem. Villarreal are well organised and they have a lot of quality. We had a lot of chances, but only seven on target. We weren't efficient enough with the opportunities we had."

They weren't and the disappointing draw opens up the title race to Barcelona - with the Catalans now only two points behind at the top of the table - ahead of the Clasico at Camp Nou later this month.

So Madrid had better hope their talisman is back on form by then - because Ronaldo must be firing on all cylinders if they are to win La Liga for only the second time in his six seasons at the club.