ANALYSIS: Former Real and Croatia midfielder Robert Jarni tells Goal his former club have missed the 29-year-old, but says they should avoid rushing him back to action
By Ben Hayward in Madrid

Modric picked up a thigh injury on international duty with Croatia on November 16 and has been sidelined ever since, missing Madrid's participation in the Club World Cup late last year, the Copa del Rey quarter-final against Atletico and a number of Liga matches as well.

Madrid made light of his absence initially, winning their next nine games to end 2014 with a record 22 straight victories in all competitions, culminating in the Club World Cup crown in Morocco on December 20.

But without the former Tottenham midfielder, Real's performances paled in comparison to the fantastic form which had seen them beating everyone else - including Barcelona in a 3-1 win at the Bernabeu - so convincingly through most of September and October.

"Luka has demonstrated his class at Madrid," former Real and Croatia midfielder Robert Jarni told Goal. "He has won everyone over with his quality and his attitude. Without Luka, it's not the same Real Madrid."

With Modric in the team, Madrid won 13 games prior to his injury, lost three (two against Atleti, one at Real Sociedad) and drew one (at home to Diego Simeone's side in the Supercopa), scoring 51 and conceding 14. He sat out the 5-1 home victory over Elche and the Copa clash against Segunda B side Cornella, which Real won 4-1.

Without him, Madrid have won 16, lost three (two more against Atleti, the other at Valencia) and drawn one (also at home to Simeone's side), scoring 50 and conceding 15. 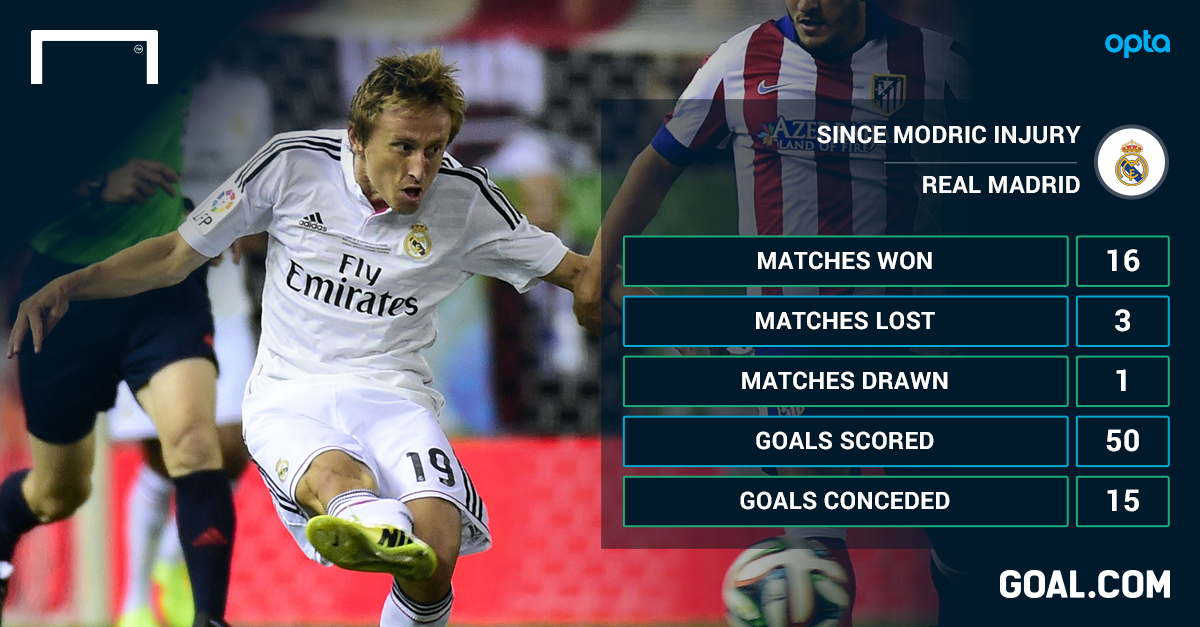 The record is similar. However, much like Barcelona's Andres Iniesta, it is impossible to judge the influence of Modric on stats alone. With his intricate passing, driving runs to carry the ball forward, his ability to operate in tight spaces and his knack of setting the tempo for his team-mates, the Croat gives Madrid a creative outlet they have been badly lacking in recent weeks.

"He is a very competitive player and he is special because he sees everything in his head," Jarni said. "He makes the others play, he sets the rhythm - he knows when to accelerate the play and when to slow it down. That's what makes him so important."

Indeed, while summer signing Toni Kroos took the plaudits for Madrid's fine form late last year along with Isco's introduction and Cristiano Ronaldo's red-hot streak in front of goal, few mentioned Modric. In his absence, however, Ancelotti's side have failed to hit the heights that made them favourites for La Liga and the Champions League in the final months of 2014.

"It takes time for a team to adjust without a player like Luka and Madrid have struggled to recreate that form they showed earlier in the season," Jarni said.

Now that he is back, though, Ronaldo in particular is likely to be a big beneficiary. With Modric in the team, the Portuguese netted 19 of his 37 goals (in just 16 games) as he put together his best scoring sequence of the season.

"With Luka or without Luka, Madrid have so much quality," Jarni added. "It's hard to say whether Ronaldo is affected by Modric being out, but it's true the team were playing better as a unit when he was fit."

Madrid now hope Modric will be back to full fitness and firing on all cylinders in time for the Clasico at Camp Nou on March 22, but Jarni says the midfielder must not be rushed back into action.

"Only the player himself knows how he is," the 46-year-old said. "If he is brought back too soon, it could do more harm than good and he could end up with a worse injury than the original one.

"Madrid need Luka - but he has to be ready."