Last week's confirmation of a €6.9 billion, three-year Premier League television deal put an end to any debate about the long-term pulling power of football.

The announcement takes the sport to a whole new level at a time when global austerity suggests such figures should be decreasing rather than increasing.

Yet the Premier League contract is not good news for everybody in football. With televised English top-flight games worth around €12 million each and other leading European leagues battling to keep up, the Champions League stands to lose out heavily.

Despite its continuing rise in stature since the European Cup's shake-up in 1992, the riches on offer from the competition are being gradually dwarfed by the loot available on home soil.

Yet all of those figures offer bigger rewards than Uefa have been able to provide for progress in the Champions League. Real Madrid’s Decima triumph in Lisbon in 2014 was rewarded with a €57.4m cut of the prize fund, yet they cashed in €140m in broadcasting revenue under the terms for Spanish TV rights. 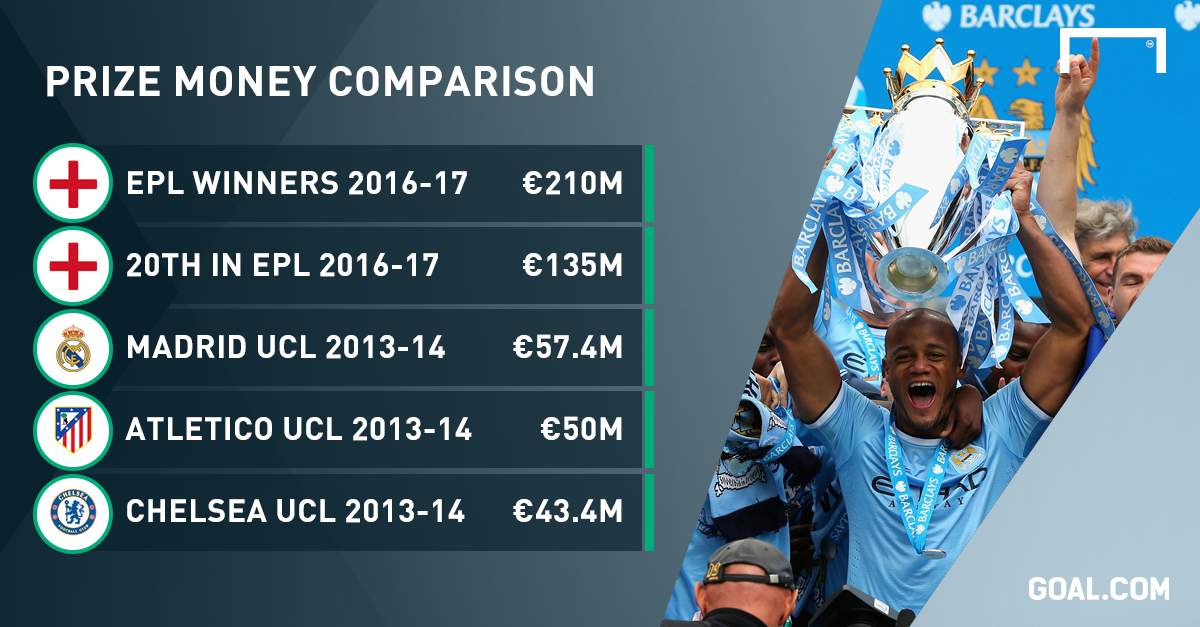 Madrid are a special case since they and Barcelona currently benefit from the lack of a collective bargaining agreement in the Primera Division. Even a deal entitling Spanish clubs to a similar ratio of the pot as the system in England allows would have seen the Blancos matching their Champions League return.

Indeed, Chelsea pocketed €112.9m for finishing third in the Premier League yet only €43.4m for advancing to the last four in Europe, and would have still only claimed a fund equating to 50% of their domestic bonus had they gone on to win the Champions League themselves.

But the most incredible statistic is that Madrid’s European cash boost came in €20m shy of the broadcasting revenue collected by Cardiff City, who finished dead last in the Premier League. And that difference is growing.

When the new EPL deal kicks in, clubs demoted to the Championship are set to earn three times more in prize money than the winners of the Champions League. The most prestigious competition in world club football is being made entirely redundant by the domestic game’s pulling power.

The assertion that more than half of the Premier League’s 20 clubs would gladly accept the offer of 17th spot and the safety that it guarantees is becoming more and more justified with each passing TV deal.

A club’s ability to continue raking in the millions on offer in the top flight is of far greater importance than an outside shot at European progression and the trappings that can come with the extra exertions. A speculative bid to challenge the natural order is simply becoming too big a risk.

And the gap between England and Europe is only likely to grow, with EPL Chief Executive Richard Scudamore underlining the importance of the new TV rights deal.

“That money will continue to be invested by the clubs in terms of playing talent to continue to put on the best possible show they can,” he boasted on announcing the agreement.

Such an addition of wealth is likely to lead to even more of the world’s greatest players being enticed to England to ply their trade, and before long the Premier League title will become more prestigious than the Champions League crown.

The recent Deloitte Football Money League release placed 14 of the Premier League’s 20 clubs among the top 30 highest-earning outfits in the world game, and the continued escalation of TV cash can only lead to an increased financial dominance for the English.

Sky TV have contributed around €5.6bn to the new deal, and their corporate affairs director Graham McWilliam took to Twitter to explain why it was such a coup for his company to secure Premier League rights for such a huge outlay while passing up the chance to maintain its hold on Champions League coverage across the United Kingdom.

4/7 Right decision for us not to chase Champ League. £300m only guarantees 26 matches with British teams. #premierleague matters more to fans

While chasing a top-four place for the right to be involved in the Champions League currently remains many European clubs’ first priority, the ability to match the Premier League’s pulling power in any way possible and make the most of the football boom is rapidly becoming a sport in itself.

"We have a serious problem. We won't be the best league in a year," La Liga president Javier Tebas admitted to the BBC last week.

"We're going to lose a lot of value in the market because the Premier League is going to snap up all of the global TV competition and contracts."

And as that happens more and more, the importance of the Champions League will also diminish. Uefa’s boast that their competition is the only place to see all of the world’s best teams and players colliding is becoming increasingly diluted.

A time is coming when the Premier League will have the financial muscle to attract the planet’s biggest stars every single weekend, and when it does the Champions League risks being relegated into a second-tier competition.